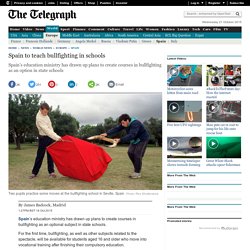 They would join Catalonia and the Canary Islands, where the practice is already outlawed. But the education ministry’s draft proposals defend the decision to include bullfighting in the state educational system as a logical extension of the activity’s importance within Spanish society, denying any political dimension to the move. “Tauromachy is an artistic practice which forms part of popular tradition and culture with no ideological links,” the text reads, continuing: “Bullfighting and bull-related festivals are subject to a constant evolution, making it impossible to guess in which way they will adapt to the changing sensitivities of our times and those to come”.