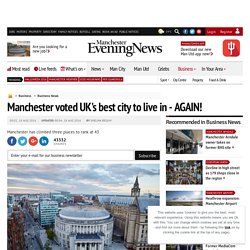 The Global Liveability Survey was compiled by the Economist Intelligence Unit and scores 140 cities worldwide out of 100 in the areas of health care, education, stability, culture and environment and infrastructure. Manchester scored 88.8 out of a 100 and has climbed three places to rank at 43 thanks to liveability declines elsewhere. Meanwhile, London, which scored 87.2, saw an unchanged ranking of 53rd – ten places lower than Manchester. The capital’s lower score reflects the capital suffering from a higher perceived threat from terrorism and petty crime, even though it has more cultural attractions and a more robust infrastructure, compared to Manchester.

Tourism bosses said they weren't surprised given Manchester's transport infrastructure, cultural offering, and property boom. Urban Regeneration. Manchester Vacation Travel Guide. “The Manchester miracle”: how did a city in decline become the poster child for urban regeneration? I was hovering gormlessly outside Coventry station, waiting for Google Maps to load, when I suddenly realised I didn't need to bother. 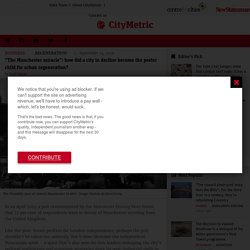 Some kind soul had installed large and obvious signs to point out the best way to reach the city centre on foot. More than that, they'd made the correct route all but unmissable. A wide pedestrianised path wound its way passed a half-finished new office development, across a buried ring road, and through a small park, Greyfriars Green. After that, it continued down a tree-lined avenue passed a venerable-looking parade of shops and bars. It reminded me of bits of Oxford or Cambridge. The Bomb That Made Manchester? - Media Centre.

Revealed: the friendliest and most attractive cities in the UK. THE RE-BIRTH OF MANCHESTER. Northern Quarter Manchester. The City Life: Regeneration. Manchester: The Manchester model. Interview Dos and Don'ts.