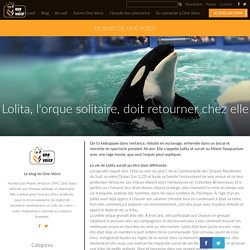 Lolita the Killer Whale at the Miami Seaquarium 1971. Legal battle expected in wake of Lolita decision for endangered status. A decision to list the captive orca Lolita for federal protection is expected to set the stage for a lawsuit from advocates seeking the whale’s release. 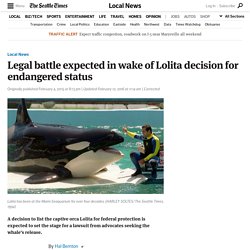 A Puget Sound orca held for decades at Miami’s Seaquarium will gain the protection of the federal Endangered Species Act, a move expected to set the stage for a lawsuit from advocates seeking the whale’s release. The National Oceanic and Atmospheric Administration (NOAA) announced Wednesday the decision to list Lolita as part of the southern resident killer whales of Puget Sound, which already are considered endangered under the federal act. Whale activists, who petitioned for this status, have long campaigned for Lolita’s return to Puget Sound. They hope the listing will provide a stronger legal case to release Lolita than did a previous lawsuit that centered on alleged violations of the federal Animal Welfare Act. NOAA Fisheries officials on Wednesday described their decision in narrow terms, which set no broader precedents. 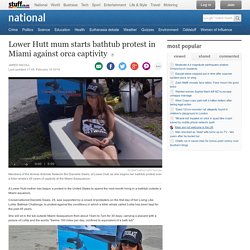 Stop SCUBAFILMFACTORY/YouTube Members of the Animal Activists Network film Danielle Daals, of Lower Hutt, as she begins her bathtub protest over a killer whale's 45 years of captivity at the Miami Seaquarium. United4Lolita - London. Free Lolita Protestor To Live In Bathtub Outside Miami Seaquarium Next Month. Danielle Daals has been making the most of every minute with her family lately, from relishing strolls in the park with her pup Maxwell, a rescue, to savoring sips of coffee during chats with her mom Stephanie. 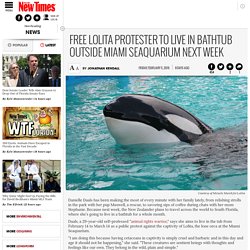 Because next week, the New Zealander plans to travel across the world to South Florida, where she's going to live in a bathtub for a whole month. , a 29-year-old self-professed “animal rights warrior,” says she aims to live in the tub from February 14 to March 14 as a public protest against the captivity of Lolita, the lone orca at the Miami Seaquarium. “I am doing this because having cetaceans in captivity is simply cruel and barbaric and in this day and age it should not be happening,” she said. “These creatures are sentient beings with thoughts and feelings like our own.

They belong in the wild, plain and simple.” Hutt woman to spend month in Miami bathtub to protest whale in captivity. Last updated 16:47, September 24 2015 A Lower Hutt activist is going to fight for the release of Lolita from Miami Seaquarium. 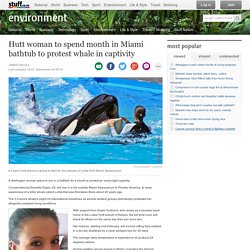 A Wellington woman plans to live in a bathtub for a month to protest an orca's tight captivity. Conservationist Danielle Daals, 29, will live in a tub outside Miami Seaquarium in Florida, America, to raise awareness of a killer whale called Lolita that was first taken there about 45 years ago. The 3.2-tonne whale's plight hit international headlines as animal welfare groups relentlessly protested her allegedly cramped living conditions. Living Like Lolita Bathtub Challenge. Seaquarium Protestor to Live in Bathtub for a Month. A 29-year-old New Zealand woman will soon be living in a bathtub for a month outside of the Miami Seaquarium. 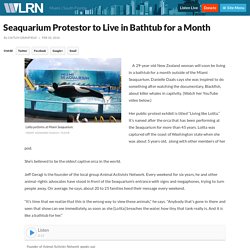 Danielle Daals says she was inspired to do something after watching the documentary, Blackfish, about killer whales in captivity. (Watch her YouTube video below.) Miami Celebrities and City Leaders Call for Release of Lolita. Tuesday, August 4, 2015 | 11 days ago Freeing Lolita, Miami Seaquarium's orca that has been living in the smallest tank in North America for more than four decades, is a cause of many animal-rights organizations both local and national, including PETA. 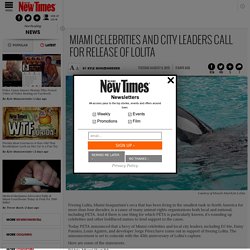 And if there is one thing for which PETA is particularly known, it's rounding up celebrities and other boldfaced names to lend support to the cause. Today PETA announced that a bevy of Miami celebrities and local city leaders, including DJ Irie, Daisy Fuentes, Louis Aguirre, and developer Jorge Pérez have come out in support of freeing Lolita. One Dolphin's Story – Hugo. Quick Facts Born: 1965 (estimated)Caught: 1968, Puget Sound, WashingtonDied: 1980; cerebral aneurysm Hugo was eating 100 pounds of fish a day, and the bigger he got, the smaller his little whale bowl seemed.” ~ Ric O’Barry, “Behind the Dolphin Smile” In February, 1968 a young male orca, later named Hugo was caught in Vaughn Bay, near Puget Sound, Washington. 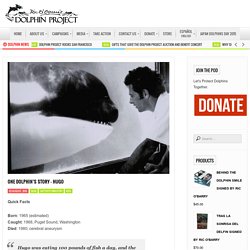 A female whale was caught alongside him, and shipped to the New York Aquarium in Coney Island where she died a mere seven months later from a respiratory infection. Lawsuit: captive Miami orca violates Endangered Species Act. Why USDA Officials Have Not Recognized Lolita’s Tank As Substandard. Despite years of activists claiming Lolita the orca's tank is unlawfully small, and even documents surfacing suggesting USDA inspectors also doubted whether her tank was compliant under the Animal Welfare Act (AWA), government officials have never cited the Miami Seaquarium for its whale pool. 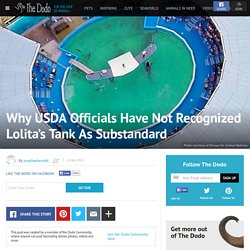 It was originally claimed by officials at the Animal and Plant Health Inspection Service (APHIS), a division of the USDA, that the tank was compliant because of the government agency's waiver of the concrete work island in her tank, which allowed the tank to meet space requirements. At least on paper. However, according to government documents provided by the Miami Seaquarium, in 1999 Dr. W. Ron DeHaven, an APHIS administrator, alluded the work island in the center of Lolita's tank did not require the waiver because the law does not explicitly state the minimum space requirements have to be unobstructed. 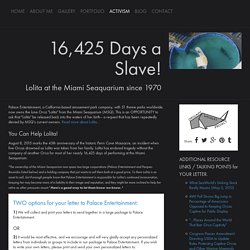 My name is …........................................................ Free Lolita Update #141: Battle for Her Freedom Not Over. Hello Friends of Lolita, There have been some big and positive developments in the past few months. Lolita's ESA status began officially (finally) on May 11, giving her new protections under a much stronger law. Meanwhile the USDA case wound down to a possible finish in the dismissal on June 16, at the same time her protection under the ESA comes into play, along with other legal and economic developments. Mix in a rising chorus of voices worldwide and on the Seaquarium's doorstep, wanting an end to the business of confining whales and dolphins in tanks as entertainment attractions. It all adds up to some prospect of new realities leading to new decisions and directions along the corporate ladders throughout the marine mammal park industry, including the new owners of the Seaquarium, and therefore Lolita.

ORCAMAMA - Blog. Lolita the Orca: Activists Lose Court Battle. UPDATE: Though PETA is disappointed with the 11th Circuit Court's ruling, it does not intend to appeal it. Yesterday was the end of the road in a long court battle for animal rights activists who hoped that the Miami Seaquarium would have its license invalidated and possibly lead to the release of Lolita the orca. Federal judges with the 11th Circuit Court in Atlanta ruled that they will not allow a lower court to rehear the case. Under the Animal Welfare Act (AWA), the Miami Seaquarium is required to renew its exhibitor’s license every year with the Animal and Plant Health Inspection Service (APHIS), an agency under the U.S.

Following a petition submitted by PETA, the Animal Legal Defense Fund, and the Orca Network, the National Marine Fisheries Service is now considering finally protecting Lolita as a member of an endangered species, which is an important first step in her rehabilitation and release from captivity. Urge Palace Entertainment, the Owner of Miami Seaquarium, to Free Lolita! Free Lolita! The remarkable story of a remarkable whale held captive for four decades. Reporting for this article was supported by The Investigative Fund at The Nation Institute and The Puffin Foundation. When you first enter the stadium at Miami Seaquarium to see the killer whale Lolita, you can walk up to the railing and peek into her home.

And it is there that you are left with the indelible impression that this 50-year-old, 80-foot-long concrete tank, chopped up by a big concrete island in the middle, is way too small for a 20-foot, four-ton orca. And yet she’s been living here for more than 40 years. Sometimes Lolita herself will come up to you while you stand there. She did so when, a couple of months ago, I arrived early for her second show of the day. After awhile I stopped shooting and just stood there at the railing, watching her watching me. A Brazilian man sidled up next to me and we began chatting. For many filmgoers, the answer was a resounding “No.” Where is Lolita? - Their Turn. The Public Relations office at the Miami Seaquarium is saying “no comment” in response to frantic inquires about the whereabouts of Lolita, an orca who has been living in the smallest killer whale tank in North America for 44 years.

The Seaquarium posted this statement for visitors on its website: “Due to routine maintenance at our Killer Whale and Dolphin Stadium, there will be no Killer Whale and Dolphin show until further notice.” Statement on Seaquarium website Some speculate that Lolita has been moved to an even smaller tank that is covered with a tarp: Photo: @OrcaSOS Lolita, who was stolen from her pod off the coast of Washington in 1970 when she was four, has captured the world’s attention because her tank that is smaller than the minimum size required by the Animal Welfare Act, and she has no orca companion or shelter from the sun. Free Lolita Update #140 - Lolita is now a protected orca. Monday morning PETA and ALDF filed a 60-day notice of intent to sue the Seaquarium for violating the ESA. Here?? S the news release: For Immediate Release: May 11, 2015 Contact: David Perle 202-483-7382, ext. 2194; DavidP@peta.org (PETA) Megan Backus 707-795-2533, ext. 1010 (office); 707-479-7872 (mobile); mbackus@aldf.org (ALDF)

Let the Girl Go: Free Lolita. Laurence W sur Twitter : "Plz help fund the #marchforLolita so we can get this poor girl out of prison! #FreeLolita.

Leave your comment for NOAA on why Lolita should be listed as "endangered" (her family pod in the wild has been listed as endangered since 2005). If she is marked endangered, she has a great chance at finally being rehabilitated and released back to her family. – laulowts