Orcas deceased in captivity. Not included in the total number given on top of the page are the 30 unsuccessful pregnancies which didn't result in a live born calf. 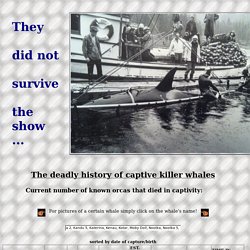 @wildforwhales. Orca Research Trust. Killer whale washes up on UK beach but cause of death is mystery. ORCAMAMA - Blog. The Orca Awareness Project. Science.kqed. SAN JUAN ISLAND, WASHINGTON – It’s an image you often see on paintings and wood carvings – a giant totemic killer whale, with the images of sea creatures and faces artistically contained within the whale’s body. 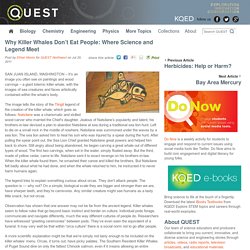 The image tells the story of the Tlingit legend of the creation of the killer whale, which goes as follows: Natsilane was a charismatic and skilled wood carver who married the Chief’s daughter. The Pandas of the Sea. I have loved the ocean, and the wonders hidden deep within it, for as long as I can remember. 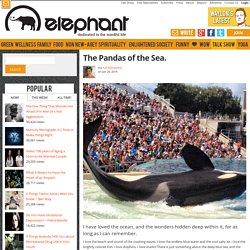 I love the beach and sound of the crashing waves. I love the endless blue water and the cool salty air. Why Are Captivity Proponents Using Keiko’s Death to Justify Keeping Lolita the Orca Imprisoned? More than two decades ago, an orca was languishing in poor health, alone in a small concrete tank, performing tricks in an amusement park. 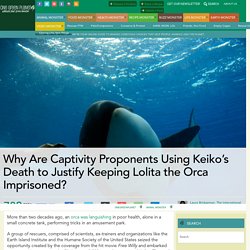 A group of rescuers, comprised of scientists, ex-trainers and organizations like the Earth Island Institute and the Humane Society of the United States seized the opportunity created by the coverage from the hit movie Free Willy and embarked on a campaign to rescue the film’s star: a 9,000 pound orca named Keiko. The goal was to bring him back to health, and return him to his native waters in Iceland. After a long yet incredibly successful campaign, in 1998, Keiko became the first captive orca whale ever returned to his home waters. Today the orca whale Lolita faces a similar fate, alone in a tiny tank at the Miami Seaquarium. Last week Lolita was added to the listing of endangered species as part the North Pacific Southern Resident orca population. La vie secrète des orques. TED talk Dr. Naomi Rose 18.04.2015. 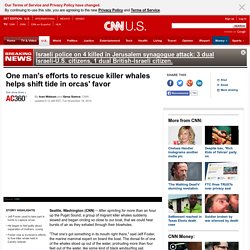 Jeff Foster used to take part in hunts to capture orcasHe began to feel guilty about separation of mothers, youngFoster now is involved in efforts to free killer whale held in Canary Islands Seattle, Washington (CNN) -- After sprinting for more than an hour up the Puget Sound, a group of migrant killer whales suddenly slowed and began circling so close to our boat, that we could hear bursts of air as they exhaled through their blowholes.

Mutant 'Type-D' Orca may be a New Species of Killer Whale. Jun 29, 2013 08:53 AM EDT The Type-D killer whale, a type of orca generally thought to have its distinct look because of a rare genetic mutation, may actually be an entirely separate species of the cetacean, according to a recent study published in the journal Polar Biology. 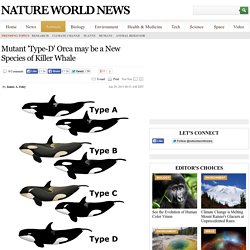 Type-D orcas, known to live in the Southern Ocean, are set apart from their Type-A, B and C peers by their notably small white eye patch, bulbous head and shorter-than-normal dorsal fin. Other types of orca have much larger white eye patches and streamlined bodies. What hubris makes us think we can imprison a 22ft killing machine? Idly browsing through Netflix is a dangerous business. 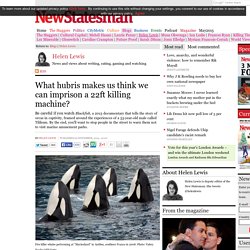 For a start, it encourages you to wallow in old sitcoms and cult dramas you’ve watched a dozen times before instead of learning what this newfangled “Scandinavian noir” business is. But sometimes, serendipity leads you to something remarkable – which is how I ended up this weekend turning into an orca liberationist. Keiko's Legacy - Are Orcas non-human persons? Kathleen Haase, who developed her own petition to ask British Airways to stop selling trips to SeaWorld, has been volunteering for WDC, working with us on our anti-captivity campaigns. 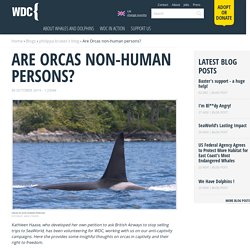 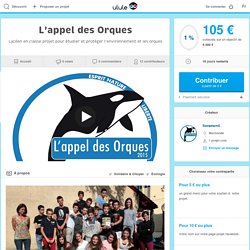 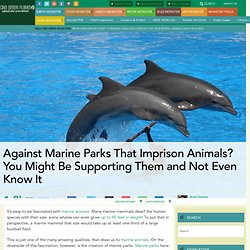 Many marine mammals dwarf the human species with their size; some whales can even grow up to 90 feet in length! To put that in perspective, a marine mammal that size would take up at least one-third of a large football field. This is just one of the many amazing qualities, that draw us to marine animals. On the downside of this fascination, however, is the creation of marine parks. Marine parks have become popular attractions where people can see creatures of the deep blue sea, without having to leave the comfort of their own cities. However, just because something popular, doesn’t always mean it’s right – we’re coming to realize that these highly intelligent and sociable beings kept in marine parks cannot lead happy and healthy lives in captivity. Killer Whale Health & Daily Care. Killer Whale Health & Daily Care SeaWorld has been safely caring for killer whales for nearly 50 years. We are a global leader in the care, behavior and enrichment of this species and are accredited by the world’s foremost professional zoological organizations.

Including our whales overseas, we provide for the health and well-being of the largest killer whale population in a zoological organization worldwide: 29 animals. These killer whales are healthy and well adapted to their surroundings, a fact that is evident to us through our constant care, interaction and observation 24 hours per day. We apply a broad range of best practices in behavioral training, environmental enrichment, preventive health, veterinary medicine and facilities design and management. Www.pac.dfo-mpo.gc.ca/consultation/sara-lep/rkw-epres/2012-02-ag open-house-odj-portes-ouvertes-fra.pdf. Luna. Killer Whale Legislation Could Actually Hurt the Species : Life. A new piece of legislation intended to protect killer whales could actually harm the species as a whole, according to an aquarium trainer.

A California lawmaker wants to ban keeping orcas in captivity for the famous shows featuring the killer whales, CNN reported. Like Us on Facebook. EcoJoia LLC. Blog de hommage-orca - Skyrock.com. Inside the mind of a killer whale: A Q+A with the neuroscientist from ‘Blackfish’ Regulations. Ever Wondered How Fast Orcas Swim in the Ocean? Since the release of Blackfish, and perhaps way before, we’ve known that killer whales do not belong in captivity. We are now fully aware of the fact that they can swim more than 100 miles per day in the wild. However, has it ever occurred to us just how fast an orca whale can actually swim? Blue whales have been recorded swimming up to 29 miles per hour in the ocean, and killer whales have been known to be able to match those same speeds. What's Next For The World's Captive Orcas. Orcas are highly intelligent and social animals. Cetaceans Released from Captivity.