Creating an Input Method. An input method editor (IME) is a user control that enables users to enter text. 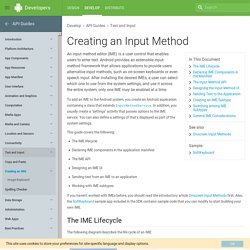 Android provides an extensible input-method framework that allows applications to provide users alternative input methods, such as on-screen keyboards or even speech input. After installing the desired IMEs, a user can select which one to use from the system settings, and use it across the entire system; only one IME may be enabled at a time. To add an IME to the Android system, you create an Android application containing a class that extends InputMethodService. In addition, you usually create a "settings" activity that passes options to the IME service. You can also define a settings UI that's displayed as part of the system settings. This guide covers the following: The IME lifecycle Declaring IME components in the application manifest The IME API Designing an IME UI Sending text from an IME to an application Working with IME subtypes The IME Lifecycle Figure 1. Declaring IME Components in the Manifest.

Create a Custom Keyboard on Android. 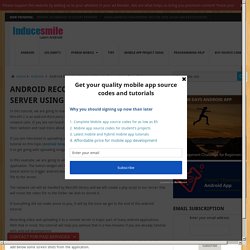 Retrofit 2 is an android third party library that you can add in your android project to simplify network calls. If you are not heard about Android Retrofit before I will suggestion you go over to their website and read more about Retrofit. If you are interested in uploading an image file to the server using Retrofit, don’t worry. Multithreading For Performance. [This post is by Gilles Debunne, an engineer in the Android group who loves to get multitasked. — Tim Bray] A good practice in creating responsive applications is to make sure your main UI thread does the minimum amount of work. 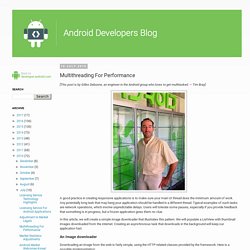 Any potentially long task that may hang your application should be handled in a different thread. Typical examples of such tasks are network operations, which involve unpredictable delays. Users will tolerate some pauses, especially if you provide feedback that something is in progress, but a frozen application gives them no clue. In this article, we will create a simple image downloader that illustrates this pattern. Getting Started - Android SDK. To use Facebook SDK in a project, add it as a build dependency and import it. 1. 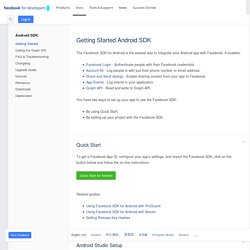 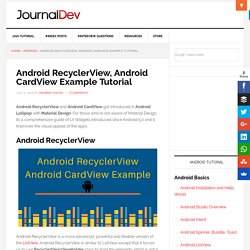 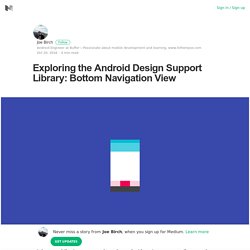 Compile ‘com.android.support:design:25.0.0’ Next we simply need to add the Bottom Navigation View widget to our desired layout file. Remember that this should be aligned with the bottom of the screen with all content displaying above it. How to build an image gallery app - full tutorial with code. Android Navigation Drawer Example Tutorial - JournalDev. In this tutorial we’ll implement a Navigation Drawer in our android application. 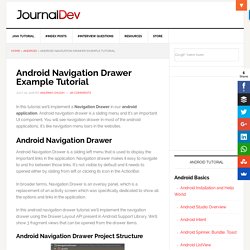 In broader terms, Navigation Drawer is an overlay panel, which is a replacement of an activity screen which was specifically dedicated to show all the options and links in the application. Know Your Layouts in Android. Android provides solid support for the development of UI-based applications. 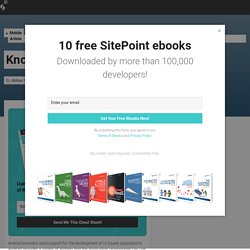 Android provides a variety of widgets that the application programmer can use to create a desired layout and interface. These layout elements can be created via the programming language directly, or through XML layout files. In this article, we are going to show you both methods and highlight their differences. Jsoup Tutorial and Examples. Jsoup is to HTML, what XML parsers are to XML. 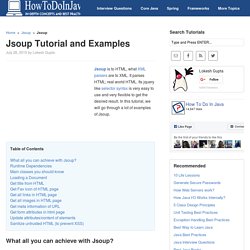 It parses HTML; real world HTML. Its jquery like selector syntax is very easy to use and very flexible to get the desired result. In this tutorial, we will go through a lot of examples of Jsoup. Table of Contents What all you can achieve with Jsoup? Tutorial Multi-pane Fragments - Android Kaizen. Ok so due to some emails I have received from you guys about the previous Fragments Tutorial, today we gonna see how to use single or multi-pane Fragments depending on the device they are running on. 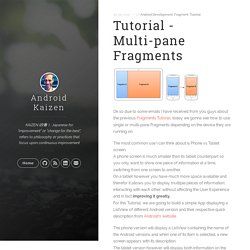 The most common use I can think about is Phone vs Tablet screen. A phone screen is much smaller than its tablet counterpart so you only want to show one piece of information at a time, switching from one screen to another. On a tablet however you have much more space available and therefor it allows you to display multiple pieces of information; interacting with each other; without affecting the User Experience and in fact improving it greatly.

Multi-pane development in Android with Fragments. The following tutorial demonstrates how to use fragments in a standard Android application without using the support library. The application uses layouts with different fragments depending on portrait and landscape mode. In portrait mode the RssfeedActivity shows one fragment. From this fragment the user can navigate to another activity which contains another fragment. In landscape mode RssfeedActivity shows both fragments side by side. 6.1. ViewPager with FragmentPagerAdapter. Overview Layout that allows the user to swipe left and right through "pages" of content which are usually different fragments. This is a common navigation mode to use instead of ActionBar Tabs with Fragments. Usage Layout ViewPager A ViewPager is a layout which can be added to any layout XML file inside a root layout: If you want an "indicator" that displays the pages available at the top as shown in the screenshot above, you need to include a nested indicator view called a PagerTabStrip: which will automatically display the page indicator for your pager.

ViewPager with FragmentPagerAdapter. Overview Layout that allows the user to swipe left and right through "pages" of content which are usually different fragments. This is a common navigation mode to use instead of ActionBar Tabs with Fragments. Usage. Java - What's the best way to share data between activities? ActionBar Tabs with Fragments. Fragments and Tabs There are several ways to setup tabs with fragments. The easiest is using ActionBar tabs. Note: Standard ActionBar tabs are not supported in Gingerbread, so many people use ActionBarSherlock when Gingerbread must be supported. Google has also released a support AppCompatActivity class which can be used for compatible tabs. Thankfully, both the support approaches are more or less identical in code with a few class name tweaks. Note: As of Android 5.0, ActionBar Tabs is now officially deprecated. Without Gingerbread Support. Styling tabs in the Android action bar. I’m currently in the process of putting the finishing touches on the Android version of Find My Train.

Since design detail is a major focus in the app, I’m delving deeper into some of the UI elements than might be done on a typical app. My most recent change was to tweak the color of the tabs on the action bar to match the color scheme of the app. This turned out to be surprisingly tricky, so I’m documenting it here. The default color looked like this: As you can see, the little indicator of the active tab is a blue color that doesn’t really go along with the rest of the app. However, it doesn’t go into much detail about how to actually style the tabs. I tried it out, and it generated a huge number of resource files, plus it was using images for the solid color parts, so I wasn’t very happy with it.

Android Material Design working with Tabs. Material icons - Material Design. Supporting multiple themes in your Android app (Part 2) - Ha Duy Trung’s Blog. In the first part of this post, we have created a light theme and made initial preparation to support multiple themes. In this blog post, we will continue that effort, creating another theme and allowing dynamic switching of themes during runtime. Ideally, if we treat theme as a configuration, we should be able to specify theme-specific resources under a ‘theme-qualifier’ resources directory, e.g. values-dark for dark theme resources and values-light for light theme resources. Unfortunately, this is not yet an option at the time of this post. So how should we specify resources for multiple themes? GitHub - daimajia/AndroidSwipeLayout: The Most Powerful Swipe Layout!

ViewPager with FragmentPagerAdapter · codepath/android_guides Wiki. Overview Layout that allows the user to swipe left and right through "pages" of content which are usually different fragments. Android SQLite Example. Project Description This Android SQLite tutorial explains the following, How to create a new database with a table (Employee table) in your application.Write SQLite Data Access Object (DAO) class for handling database create, read, update and delete (CRUD) operations on the table.Add an Action bar menu item icon to insert employee details into database.Retrieve employee details from database and display it in ListView.Custom dialog fragment to update employee details.Communication between dialog fragment and list fragment (via main activity using an interface) when employee details are updated.Delete employee details on list item long click event.Proper back navigation of fragments on back key press.How to handle fragment orientation changes and retain the state of the fragment.