This is a collection of videos, articles and websites that I have collected about the topic of digital citizenship. The focus is on Years 7-10 students in Melbourne; the resources have been gathered from Australia and around the world.

This dark side of the Internet is costing young people their jobs and social lives. (Matt Chase/For The Washington Post) FALL CITY, WASH. — It was group discussion time at reSTART, a woodsy rehabilitation center about 30 miles outside Seattle. 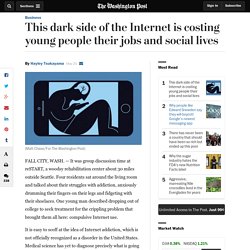 Four residents sat around the living room and talked about their struggles with addiction, anxiously drumming their fingers on their legs and fidgeting with their shoelaces. One young man described dropping out of college to seek treatment for the crippling problem that brought them all here: compulsive Internet use. It is easy to scoff at the idea of Internet addiction, which is not officially recognized as a disorder in the United States. Medical science has yet to diagnose precisely what is going on in the brains of the addicted, and there is no clear definition of what entails an Internet addiction. Lesson plans for secondary classes. Games, apps and social networking sites. No excuses when it comes to kids and porn. 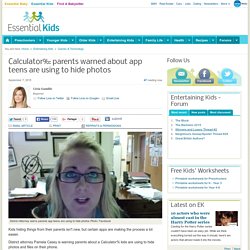 District attorney Pamela Casey is warning parents about a Calculator% kids are using to hide photos and files on their phone. Cyber bulling: New password sharing trend on the rise. White-washing your online history. Glenn McGrath can't get away from those online photos of him posing with dead African wildlife. 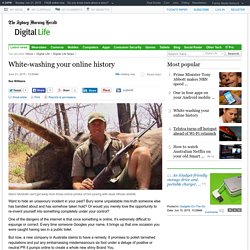 Want to hide an unsavoury incident in your past? Bury some unpalatable mis-truth someone else has bandied about and has somehow taken hold? Or would you merely love the opportunity to re-invent yourself into something completely under your control? One of the dangers of the internet is that once something is online, it's extremely difficult to expunge or correct. Every time someone Googles your name, it brings up that one occasion you were caught having sex in a public toilet. But now, a new company in Australia claims to have a remedy. Olympic golden girl Stephanie Rice was blasted for a homophobic tweet about the South African rugby team. Paedophile preys on students in class via chat site. A sexual predator has used a webcam to masturbate in front of Year 7 students at a Victorian state high school. 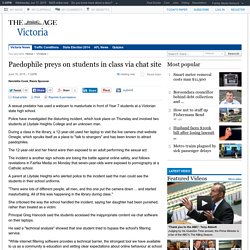 Police have investigated the disturbing incident, which took place on Thursday and involved two students at Lilydale Heights College and an unknown man. During a class in the library, a 12-year-old used her laptop to visit the live camera chat website Omegle, which spruiks itself as a place to "talk to strangers" and has been known to attract paedophiles. The 12-year-old and her friend were then exposed to an adult performing the sexual act. The incident is another sign schools are losing the battle against online safety, and follows revelations in Fairfax Media on Monday that seven-year-olds were exposed to pornography at a Catholic school. A parent at Lilydale Heights who alerted police to the incident said the man could see the students in their school uniforms. 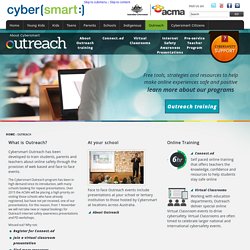 Cybersmart Outreach has been developed to train students, parents and teachers about online safety through the provision of web based and face to face events. The Cybersmart Outreach program has been in high demand since its introduction, with many schools booking for repeat presentations. Parents' Top 5 Questions to Keep Kids Safe Online  Common Sense Media parenting expert Caroline Knorr answers questions about keeping kids safe online for Internet Safety Month. 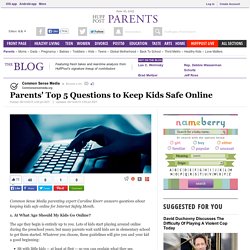 10 Important Password Tips Everyone Should Know. Your bank data, your accounts, your email, and your life are all wrapped up in your ability to create secure passwords and remember them. 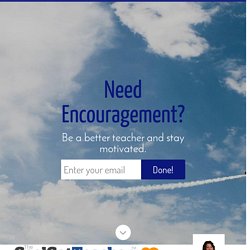 And yet most educators (and their students) struggle to remember passwords. With so many passwords stolen, there are things all of us SHOULD know to make our identities and bank accounts safer. Mark Burnett, author of the most commonly used passwords wordcloud featured on this post, says that the top 10,000 passwords represent 98.8% of all users. 2014 Recap: 15 Top Resources On Digital Citizenship. A lot of the facts you teach your students will be long forgotten by the time they reach graduation, but the hope is that the practical lessons — the ones that can benefit them for years to come — are the ones that will stick. 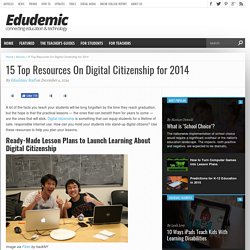 Digital citizenship is something that can equip students for a lifetime of safe, responsible Internet use. How can you mold your students into stand-up digital citizens? Use these resources to help you plan your lessons. Ready-Made Lesson Plans to Launch Learning About Digital Citizenship Image via Flickr by hackNY Ready-made lesson plans about digital citizenship can serve as the perfect launchpad for discussing this topic in class.

In honor of Digital Citizenship week, Edutopia put together a list of the latest and best resources to help educators bring digital citizenship awareness to their classrooms. Engaging Games to Promote Digital Citizenship Furthering the Discussion. 9 Traits of Good Digital Citizens. Are you compromising your children's privacy online? - Marianne Stenger - ABC Splash - These days if you don't take a picture of something and post about it, it may as well never have happened. 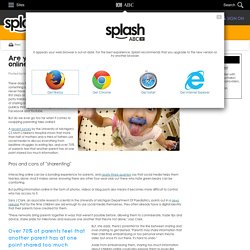 Whether it's a child's first steps or an amusing anecdote about a potty training mishap, most of us think nothing of sharing our childrearing highs and lows publicly through personal blogs or sites like Facebook and YouTube. Snapchat and 7 More Iffy Messaging Apps Teens Love. You probably never thought you'd see the day when Facebook wasn't the center of teens' universe. 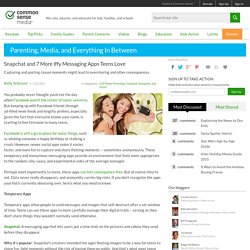 But keeping up with Facebook friends through ad-filled news feeds and lengthy profiles, especially given the fact that everyone knows your name, is starting to feel tiresome to many teens. Facebook is still a go-to place for many things, such as wishing someone a happy birthday or stalking a crush. However, newer social apps make it easier, faster, and more fun to capture and share fleeting moments -- sometimes anonymously. A reminder that your Instagram photos aren’t really yours: Someone else can sell them for $90,000. Richard Prince’s Instagram screenshots at Frieze Art Fair in New York. (Marco Scozzaro/Frieze) The Internet is the place where nothing goes to die. Online Safety: A Teacher’s Guide to Dealing with Cyberbullying, Sexting, and Student Privacy.

Social media and text messages have blurred the lines between students’ school lives and private lives. While most schools take clear steps to protect students at school, more schools are beginning to consider the need to set policies that apply to students’ activities outside of school. When it comes to questionable online activities like cyberbullying and sexting, kids sometimes feel pressured to follow the crowd. Teachers can play a crucial role in setting high expectations for online behavior. Schools can open conversations about online safety so that students learn to set personal boundaries and feel more comfortable reporting incidents like bullying and harassment. Image via Flickr by Brad Flickinger. Privacy Since the birth of the Internet, adults have been worried about kids sharing too much online.

On the plus side, teens are becoming increasingly aware of the need to protect themselves online. TAGGED. THE CYBER BULLYING VIRUS. What can schools do about bullying? Team leaders: Jonathon Magrath and Sophie Goldrick, year 10 students at Koonung Secondary College, are helping to trial the Peaceful Schools Program there. Cybersafety educational resources for teachers and schools: Cybersmart. Professional development The Cybersmart Outreach program has been in high demand since its introduction, with many schools booking for repeat presentations. Over 2015 the ACMA will be placing a high priority on visiting those schools who have already registered, but have not yet received, one of our presentations. What Your Students Really Need to Know About Digital Citizenship.

The greatest software invented for human safety is the human brain. 'Sexting' now banned in Victoria. Changes in the law apply from Monday in Victoria. A Good Digital Citizenship Poster from Edmodo. The Secret Language of Girls on Instagram. What's your digital footprint? Anti-Bullying and Cybersafety. St Michael’s Catholic Parish Primary School does not tolerate bullying in any form. Guided by our leadership team, all members of the school community are committed to ensuring a safe and caring environment, which promotes positive self esteem and personal growth intellectually, physically, socially, emotionally, aesthetically and morally.

Teens Using Apple Airdrop Instead Of Snapchat And Instagram - Business Insider. What is Twitter? A Parent’s Guide - Safe Smart & Social. We created this a parent’s guide to help you better understand What is Twitter, a popular app that Teens are using. What is Twitter? Twitter is an online social network, which allows you to send instant messages (called Tweets) up to 140 characters in length.Tweets can include photos, videos, and links to other websites.Those posts can become available to all users around the world in a matter of seconds.Tweets can be posted by using a mobile app or website.Other users can “Favorite” and “Retweet” the post, if they like it. In this case the tweet goes far beyond the original user’s followers.Most Twitter accounts are set to public.

However, if the account is set as private, then only approved followers can see posted tweets.When tweets are posted they can’t be edited. Posts only can be deleted. Cyberbullying and why we need an e-safety commissioner. Zombieland? Tech Wrecking Sleep for Scores of Teens: Study. Maybe they should be dubbed Generation-Zzzz. Teens who bury their faces for hours on end in laptops, tablets, smart phones or TV screens during the days tend to suffer bad nights of sleep, researchers reported Monday. Instructional Technology. Tread very carefully ... you're leaving digital footprints. Snap: Teenagers connect and express themselves via digital media but might be less conscious of how the footprint that follows their photos, videos and posts will affect them as adults.