Lost Writings From Zora Neale Hurston Have Been Found And Will Be Released In 2020 – MadameNoire. Source: Donaldson Collection / Getty Zora Neale Hurston is one of the most revered writers of the Harlem Renaissance and decades after her death her literary work continues to be rediscovered. 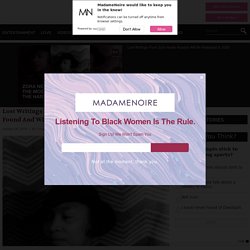 HarperCollins subsidiary, Amistad Books, will be releasing more of the late author’s work at the top of next year. According to VIBE, Hitting A Straight Lick With A Crooked Stick will consist of writings about racism, love, gender, sexism, migration and classism as well as eight short stories that were found on archives. Whoopi Goldberg On Moms Mabley's Broadway Collab w/ Zora Neale Hurston + Her Documentary. Last summer, despite some criticism of her use of the online crowd-funding website, Kickstarter, to raise funds for her Moms Mabley documentary, Whoopi Goldberg did reach her campaign goal, actually surpassing it, raising over $73,000, when her goal was to raise $65,000. 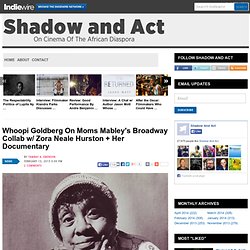 Goldberg has been working on a documentary feature on the life of pioneering comedian Moms Mabley for at least 3 years now, and it looks like she's reached the tail-end of the production phase, as she told Jimmy Fallon on his show last night, she's currently in post-production, although she doesn't say when it'll debut. Titled I Got Somethin' To Tell You, Whoopi says we can expect the following from the film: "Moms Mabley was a pioneer in the comedy world and this documentary will showcase her talent and pay homage to a woman who is still relevant today. ... Moms helped shape the idea that comedy could make a political and social statement and still be hilarious. Here's Whoopi talking to Fallon about the documentary: 10 Essential Things Zora Neale Hurston Said — F!RE Magazine. Zora Neale Hurston is the literary gift that keeps giving. 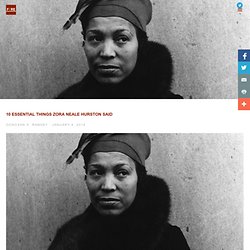 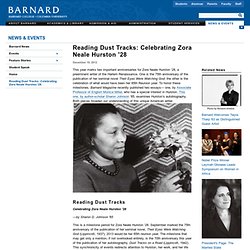 One is the 75th anniversary of the publication of her seminal novel Their Eyes Were Watching God; the other is the celebration of what would have been her 85th Reunion year. About - National Women's History Museum - NWHM. By: Laura Spears As early as childhood, the anthropologist and playwright, Zora Neale Hurston had a knack for swapping stories. 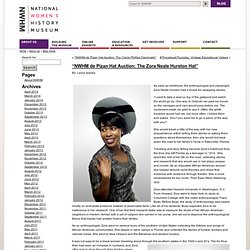 “I used to take a seat on top of the gatepost and watch the world go by. One-way to Orlando ran past my house, so the carriages and cars would pass before me. The movement made me glad to see it. Zora Neale Hurston: Re-Writing What Was Expected. Author, folklorist and anthropologist Zora Neale Hurston wrote her way into African-American history after becoming the most successful African-American female writer of the Harlem Renaissance. 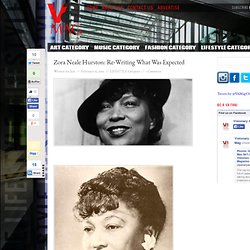 Her repertoire of more than 30 years includes four published novels, two books of folklore, an autobiography, numerous short stories, and several essays, articles and plays, according to ZoraNealeHurston.com. Born in 1891, Hurston grew up inEatonville,Fla., one of the first all-black towns formed in American after the Civil War. It was here that Hurston found her sense of African-American pride intend of inferiority. Here she “could see the evidence of black achievement all around her. Library System - Howard University. In 1918, Hurston graduated from Morgan College in Baltimore, Maryland. 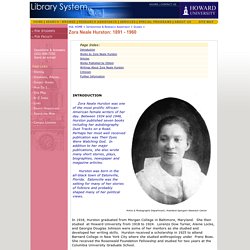 She then studied at Howard University from 1918 to 1924. Lorenzo Dow Turner, Alaine Locke, and Georgia Douglas Johnson were some of her mentors as she studied and developed her writing skills. Hurston received a scholarship in 1925 to attend Barnard College in New York City where she studied anthropology under Franz Boas. She received the Rosenwald Foundation Fellowship and studied for two years at the Columbia University Graduate School. The Harlem Renaissance was in full swing when Hurston arrived in New York City. She began her field research in Alabama by interviewing an ex-slave by the name of Cudjo Lewis. The Newly Complicated Zora Neale Hurston - Commentary. By Glenda R. 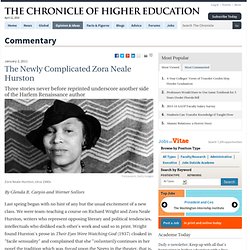 Carpio and Werner Sollors Last spring began with no hint of any but the usual excitement of a new class. We were team-teaching a course on Richard Wright and Zora Neale Hurston, writers who represent opposing literary and political tendencies, intellectuals who disliked each other's work and said so in print. Wright found Hurston's prose in Their Eyes Were Watching God (1937) cloaked in "facile sensuality" and complained that she "voluntarily continues in her novel the tradition which was forced upon the Negro in the theater, that is, the minstrel technique that makes the 'white folks' laugh.'" Hurston mocked Wright's collection Uncle Tom's Children (1938) as "a book about hatreds.

The opposition promised to make for good drama in class. We were working with the two-volume Library of America editions of both authors, augmented by many additional texts, including manuscripts. The literary journal existed only in its debut issue and did not have a wide circulation. 6. 7. 43. FlaglerLive – Your News Service for Flagler County News Palm Coast News Bunnell Flagler Beach Beverly Beach and Marineland. FlaglerLive | January 24, 2011 Zora Neale Hurston. 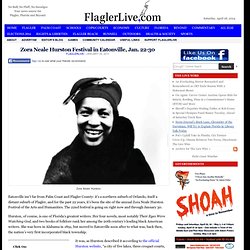 Eatonville isn’t far from Palm Coast and Flagler County: it’s a northern suburb of Orlando, itself a distant suburb of Flagler, and for the past 22 years, it’s been the site of the annual Zora Neale Hurston Festival of the Arts and Humanities. The 22nd festival is going on right now and through January 30.