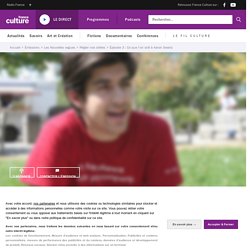 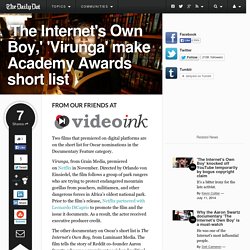 Virunga, from Grain Media, premiered on Netflix in November. Directed by Orlando von Einsiedel, the film follows a group of park rangers who are trying to protect endangered mountain gorillas from poachers, militiamen, and other dangerous forces in Africa’s oldest national park. Prior to the film’s release, Netflix partnered with Leonardo DiCaprio to promote the film and the issue it documents.

As a result, the actor received executive producer credit. The other documentary on Oscar’s short list is The Internet’s Own Boy, from Luminant Media. The full list of potential nominees are bulleted below. The Internet's Own Boy: The Story of Aaron Swartz : Brian Knappenberger. First off I'd like to apologize for the drunken rant we created after a lot of partying. 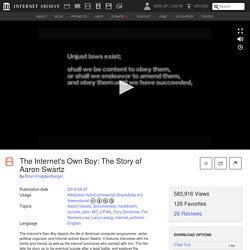 Im sorry for the people I pissed off or offended, and my family as well... I truly am. But you gotta be ASHAMED of yourselves, every last one of you Ashamed America, Ashamed World, you should all be ASHAMED of yourselves for following this TRENDY internet, LEECH bullshit and riding my coattails all the way to the bank for $$$!!!!!!! I'm fucking miserable 24 hours a day,.mind racing with headaches and drifting. I dont even dream anymore, I have multiple real VIVID ass nightmares every hour or so I wake up, fucking retarded shit I dont even think about, forced thoughts jammed into my brain unwillingly like terrets syndrome. The Extraordinary Aaron Swartz: Sundance Meets 'The Internet's Own Boy' Aaron Swartz : un héros contemporain. MIT Files Court Papers “Partially” Opposing Release Of Documents About Aaron Swartz Investigation.

The Massachusetts Institute of Technology (MIT) is “partially” opposing a request by the estate of Aaron Swartz for the release of documents related to the investigation that led to Swartz’s arrest and prosecution in federal court. 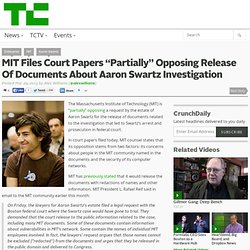 In court papers filed today, MIT counsel states that its opposition stems from two factors: its concerns about people in the MIT community named in the documents and the security of its computer networks. MIT has previously stated that it would release the documents with redactions of names and other information. MIT President L. Rafael Reif said in email to the MIT community earlier this month: On Friday, the lawyers for Aaron Swartz’s estate filed a legal request with the Boston federal court where the Swartz case would have gone to trial. The paper filed today reiterates this position, basing it on threats already made to MIT staff and three separate hacking incidents at the university.

Swartz has become a symbol in the Internet community since his suicide. MIT to release redacted Aaron Swartz documents. The Massachusetts Institute of Technology will release documents related to the case against activist Aaron Swartz but it will edit out names and other information, according to a letter from MIT president Rafael Reif to the MIT community. 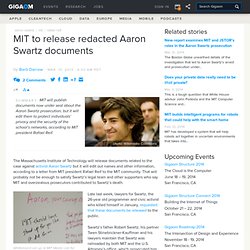 That will probably not be enough to satisfy Swartz’s legal team and other supporters who say MIT and overzealous prosecutors contributed to Swartz’s death. Whiteboard set up at MIT Media Lab for Aaron Swartz memorial. Late last week, lawyers for Swartz, the 26-year old programmer and civic activist who killed himself in January, requested that these documents be released to the public. Jeremy Hammond Speaks Out in Memory of Aaron Swartz. Untitled. The inspiring heroism of Aaron Swartz. (updated below)Aaron Swartz, the computer programmer and internet freedom activist, committed suicide on Friday in New York at the age of 26. 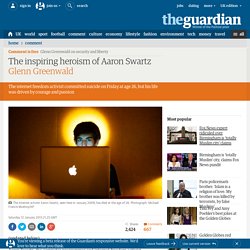 As the incredibly moving remembrances from his friends such as Cory Doctorow and Larry Lessig attest, he was unquestionably brilliant but also - like most everyone - a complex human being plagued by demons and flaws. En hommage à Aaron Swartz. Psicópatas Corp. Researchers begin posting article PDFs to twitter in #pdftribute to Aaron Swartz « Neuroconscience. Open Access Explained! Academics share copyrighted journal articles on Twitter to honor Aaron Swartz. This morning, hundreds of links to copyright-protected journal articles have appeared on Twitter in remembrance of Aaron Swartz, posted by members of the academic community. 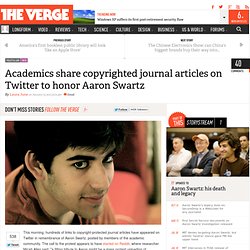 The call to the protest appears to have started on Reddit, where researcher Micah Allen said, "a fitting tribute to Aaron might be a mass protest uploading of copyright-protected research articles. Dump them on Gdocs, tweet the link. Think of the great blu-ray encoding protest but on a bigger scale for research articles. " Early this morning the Anonymous Twitter account also announced its support for the action. 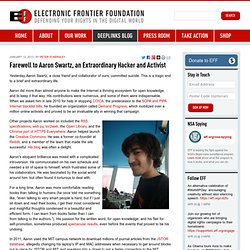 This is a tragic end to a brief and extraordinary life. Aaron did more than almost anyone to make the Internet a thriving ecosystem for open knowledge, and to keep it that way. His contributions were numerous, and some of them were indispensable. When we asked him in late 2010 for help in stopping COICA, the predecessor to the SOPA and PIPA Internet blacklist bills, he founded an organization called Demand Progress, which mobilized over a million online activists and proved to be an invaluable ally in winning that campaign.

Other projects Aaron worked on included the RSS specifications, web.py, tor2web, the Open Library, and the Chrome port of HTTPS Everywhere. Aaron's eloquent brilliance was mixed with a complicated introversion. Moreover, the situation Aaron found himself in highlights the injustice of U.S. computer crime laws, and particularly their punishment regimes. Researchers honor Swartz's memory with PDF protest. In a tribute to Aaron Swartz, the Internet activist who committed suicide Friday, researchers have begun posting PDFs to Twitter to honor his campaign for open access. 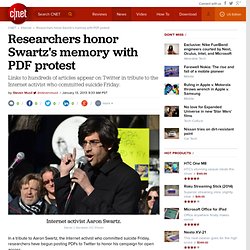 Swartz, 26, had faced the possibility of $4 million in fines and more than 50 years in prison for allegedly stealing 4 million documents from the Massachusetts Institute of Technology and Jstor, an archive of scientific journals and academic papers. The authorities claimed that he broke into a restricted-access computer wiring closet at MIT and accessed that network without authorization.