Top 10 Female Detectives In TV Shows. Interview with Author Patricia Cornwell on Her Character 'Kay Scarpetta' NPR clichés in crime novels. The Bechdel Test for Women in Movies. #3 The Smurfette Principle (Tropes vs. Women) FBI Season 1 Trailer. Four officers press ad landscape. Website News image Be A Force For All. Want to reform the police? Hire more women. A Fort Lauderdale, Florida, policeman, facing off against a line of yelling demonstrators, sticks his finger in the face of a protester. 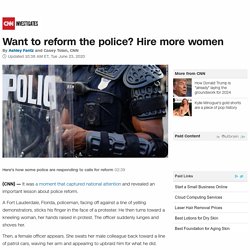 He then turns toward a kneeling woman, her hands raised in protest. The officer suddenly lunges and shoves her. Then, a female officer appears. She swats her male colleague back toward a line of patrol cars, waving her arm and appearing to upbraid him for what he did. "Thank you! " Neither Smith nor Officer Steven Pohorence, who is suspended pending an outside investigation, were allowed to comment on the incident. "I was proud of her," said Ivonne Roman, the former police chief in Newark, New Jersey, who has been fighting for years to push her profession to hire more women. As protests over the police killing of George Floyd have refocused national attention on police abuses and use of force, law enforcement experts and leaders say one powerful reform would be simple: Hire more women. How women handle policing "Women invented de-escalation," Harteau said. Women in Policing.

New Zealand's latest police recruitment ad goes viral. The incredible story of New Orleans' first black female homicide detective. On 22 February 2002, Sgt Jacklean Davis was on a walk with her supervisor, Lt Samuel Lee, when Lee got a call from their commander at the seventh district in New Orleans. 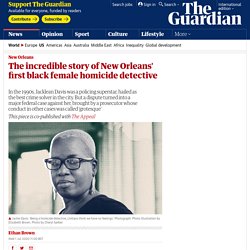 “The commander asked him if he knew my whereabouts, and he said, ‘Yeah, she’s here, we’re walking,’” Davis remembers. “I need you to return back to your residence,” Davis recalls the commander telling Lee. “You’re about to be arrested. And surely, when we pulled up to Sam’s residence, they had four black cars and two police units.

Four black cars for the FBI agents.” For more than seven months, the New Orleans police department’s Public Integrity Bureau, the FBI, and the US attorney for the eastern district of Louisiana had been investigating Davis and Lee over allegations that they extorted a group of Florida promoters who hired them to work a paid detail during an Essence festival event on 7 July 2001. Davis’s arrest effectively ended her 20-year career with the NOPD. But history may be moving her way. Art Works Podcast: Rachel Howzell Hall. The Trespasser by Tana French review – a smart, twisty crime novel. The trend for long-running crime fiction series means that the half-dozen novels that Tana French has written over the past decade are sometimes catalogued as “Dublin Murder Squad Books 1-6”. 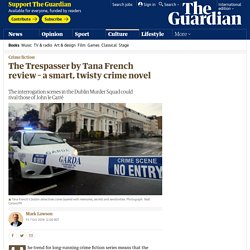 But, although the works are sequential, the connections between them are unusually tangential for the genre. This has become a key part of French’s distinctive brilliance. Eschewing a franchise protagonist, French grants the controlling perspective to a different detective each time. The Silence of the Lambs great scene - Clarice & Hannibal's first meeting. Frances McDormand in Fargo: Not your regular heroine. Written by Anvita Singh | New Delhi | Updated: March 4, 2018 9:50:30 am Farnces McDormand had won an Oscar for her performance in Fargo There is something about Frances McDormand and her choice of roles. 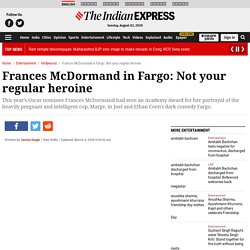 McDormand has been nominated for an Oscar in the Best Actress category for her stunning portrayal of a grieving and revenge-seeking mother Mildred in Three Billboards Outside Ebbing, Missouri. But before the eccentric Mildred, there was Fargo’s Marge, for which McDormand had won an Oscar in 1997. That McDormand is a good actor is not news, but her performance in Fargo was special. Frances plays police officer Marge Gunderson in the Joel Coen-directed movie. You don’t see many pregnant cops in movies, and so the first and obvious point of Marge is in itself a departure from the routine. "The Fall" Trailer Now streaming on Netflix. Bring on the female superheroes! If you have a daughter, you need to see this. Top 10 female detectives in fiction. My new mystery novel, The Last Place You Look, centres on female private investigator Roxane Weary as she re-investigates a 15-year-old murder case. 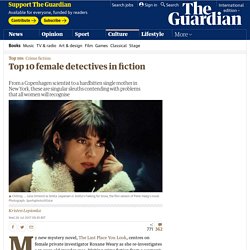 Writing crime fiction from a woman’s point of view was a natural decision for me – as a woman and a feminist, I want to read more stories like this, so why not write one myself? But I also wanted to follow in the footsteps of other writers who have taken on what has historically been a bit of a boys’ club. A crime novel from the point of view of a female detective is much more than just a difference of chromosomes.

Women obviously have a different experience to men of moving through the world – and law enforcement – which is necessarily reflected in these stories. Female detectives in fiction contend with rampant sexism, being underestimated, excluded, and harassed, in addition to battling the mysteries at the centre of their cases. 1. 2. 3. 4. 5. 6. 7. 8. 9. 10.