Media Coalition Endorses Journalist Shield Law. Caroline Little, chief executive of the Newspaper Association of America, an organization serving as liaison between a coalition of media outlets and Congressional staffs crafting a federal media shield law, praised Thursday’s passing in the the Senate Judiciary Committee by a vote of 13-5. 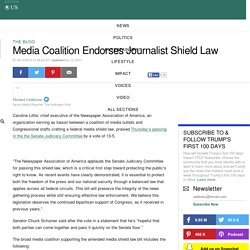 “The Newspaper Association of America applauds the Senate Judiciary Committee for passing this shield law, which is a critical first step toward protecting the public’s right to know. As recent events have clearly demonstrated, it is essential to protect both the freedom of the press and our national security through a balanced law that applies across all federal circuits. This bill will preserve the integrity of the news gathering process while still ensuring effective law enforcement. Leaked FBI documents reveal secret rules for spying on journalists with National Security Letters. Today, The Intercept published leaked documents that contain the FBI’s secret rules for targeting journalists and sources with National Security Letters (NSLs)—the controversial and unconstitutional warrantless tool the FBI uses to conduct surveillance without any court supervision whatsoever. 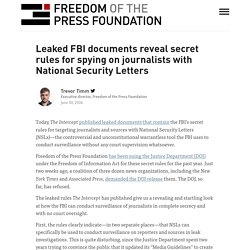 Freedom of the Press Foundation has been suing the Justice Department (DOJ) under the Freedom of Information Act for these secret rules for the past year. Just two weeks ago, a coalition of three dozen news organizations, including the New York Times and Associated Press, demanded the DOJ release them. Freedom of the Press Foundation. Digital Journalist's Legal Guide. Welcome to the Reporters Committee's Digital Journalist's Legal Guide. 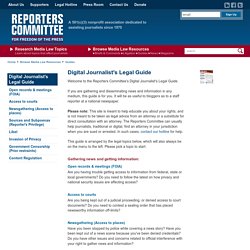 If you are gathering and disseminating news and information in any medium, this guide is for you. It will be as useful to bloggers as to a staff reporter at a national newspaper. Please note: This site is meant to help educate you about your rights, and is not meant to be taken as legal advice from an attorney or a substitute for direct consultation with an attorney. U.S. Supreme Court: Policies and Perspectives on Video and Audio Coverage of Appellate Court Proceedings. What GAO Found The U.S. 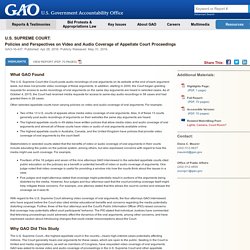 Did ‘Fake News’ Play a Role in Dakota Access Decision? The explosion of online and social media platforms has brought tremendous benefits. 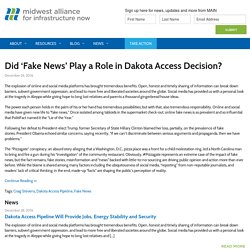 Open, honest and timely sharing of information can break down barriers, subvert government oppression, and lead to more free and liberated societies around the globe. Social media has provided us with a personal look at the tragedy in Aleppo while giving hope to long lost relatives and parents a thousand gingerbread house ideas. The power each person holds in the palm of his or her hand has tremendous possibilities; but with that, also tremendous responsibility.

Online and social media have given new life to “fake news.” Is Mainstream Media Now The Most Significant Threat To Freedom? Bernie SuarezActivist Post Humanity as a whole knows and understands the nature of governments. 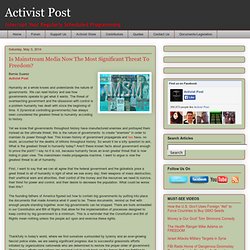 We can read history and see how governments operate to get what it wants. The threat of overreaching government and the obsession with control is a problem humanity has dealt with since the beginning of time. It (tyrannical controlling governments) has always been considered the greatest threat to humanity according to history. Watchdog Finds UK Cops Snooped on Journalists' Sources Without Approval. UK police acquired data to identify or determine journalistic sources without seeking judicial approval four times in 2015, according to a report from an independent oversight body published on Thursday. 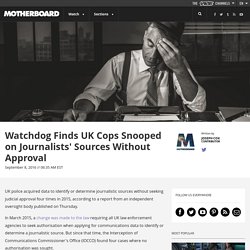 In March 2015, a change was made to the law requiring all UK law enforcement agencies to seek authorisation when applying for communications data to identify or determine a journalistic source. But since that time, the Interception of Communications Commissioner's Office (IOCCO) found four cases where no authorisation was sought. “In some of these cases the conduct took place on the day after the Code of Practice came into force or shortly thereafter,” the annual report, which scrutinises UK public bodies’ interception and acquisition of communications data, reads. IOCCO is a body responsible for oversight of the UK's interception powers, and is independent from the government and parliament. How Canada’s Anti-Cyberbullying Law Is Being Used to Spy on Journalists.

Patrick Lagacé, a columnist for Montreal’s La Presse newspaper, says that police told him he was a “tool” in an internal investigation when they tapped his iPhone’s GPS to track his whereabouts and obtained the identities of everyone who communicated with him on that phone. 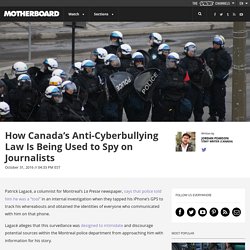 Lagacé alleges that this surveillance was designed to intimidate and discourage potential sources within the Montreal police department from approaching him with information for his story. Police obtained a warrant for this under the hugely controversial Bill C-13, which gave investigators new powers, privacy lawyer David Fraser noted in an interview. The bill was initially sold as combatting cyberbullying and the unwanted publication of intimate images online, also known as “revenge porn.” “These laws are presented with certain scenarios in mind, but these are laws of general application that can be used for any offence,” Fraser said. Camera Encryption Letter. The EFF's guide to the new and improved Freedom of Information Act. Where press regulation is concerned, we're already being fed 'post-truth' journalism. Where press regulation is concerned, we're already being fed 'post-truth' journalism The Times newspaper greeted the start of 2017 by warning: “The freedom of the press is under direct and immediate threat.” 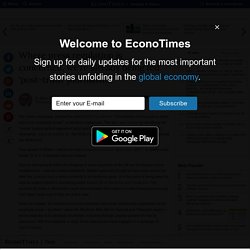 Its Murdoch stablemate, The Sun, went further by identifying the “sinister zealots behind regulators [who] want to destroy the popular press”. The Daily Mail, meanwhile, urged its readers to: “Act NOW if you want to help defend the right to read a website like MailOnline.” NDAA Conferees Drop Harmful Secrecy Language from Final Bill. NDAA Conferees Drop Harmful Secrecy Language from Final Bill November 30, 2016 After a big push from a broad group of nonprofit organizations, journalists, and individuals, the Senate and House Armed Services Committees removed a provision from the Senate National Defense Authorization Act (NDAA) that would have hindered the public’s ability to get records from the Department of Defense (DoD) under the Freedom of Information Act (FOIA). 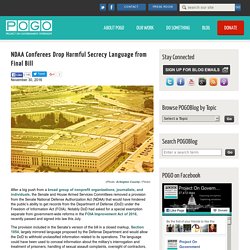 Notably DoD had asked for a special exemption separate from government-wide reforms in the FOIA Improvement Act of 2016, recently passed and signed into law this July. The provision included in the Senate’s version of the bill in a closed markup, Section 1054, largely mirrored language proposed by the Defense Department and would allow the DoD to withhold unclassified information related to its operations. While the provision was included in the Senate’s final version of the NDAA, it was removed in conference with the House, as reported by Bloomberg. At DAPL, Confiscating Cameras as Evidence of Journalism. - Advertisement - Reprinted from fair.org by Janine Jackson Militarily Armed Police(image by Unicorn Riot TV) License DMCA While elite media wait for the resistance to the Dakota Access Pipeline to go away so they can return to presenting their own chin-stroking as what it means to take climate change seriously, independent media continue to fill the void with actual coverage.

One place you can go to find reporting is The Intercept (10/25/16), where journalist Jihan Hafiz filed a video report from North Dakota, where the Standing Rock Sioux and their allies continue their stand against the sacred site--trampling, water supply--threatening project. UNBALANCED: CIVIL RIGHTS vs SECURITY. Arrests of Journalists at Standing Rock Test the Boundaries of the First Amendment. Pat Boyle, a Denver-based journalist, was shot in the abdomen last Sunday by a rubber bullet as he reported from North Dakota on a clash between demonstrators and police that would end with 26 protesters sent to hospitals and 300 requiring other medical treatment. One woman was severely injured and underwent emergency surgery on her arm after officers unleashed “less than lethal” weapons, including rubber bullets, icy cold water, and, reportedly, concussion grenades on the crowd. Police were reacting to an attempt by Dakota Access pipeline opponents to tow away burned vehicles that officers had secured in place to act as a highway blockade, preventing access to pipeline construction sites down the road.

The rubber bullet that hit Boyle tore right through his press pass, leaving a jagged hole through the words “Unicorn Riot,” his news organization’s name. Oakland activist allegedly fired after police tracked him at protest, alerted his employer — RT America. An Oakland, CA activist says local police officers sent surveillance footage of him participating in a protest last week to his employer, resulting in his firing Monday.

The activist, who goes by @Anon4Justice on Twitter, tweeted the details Monday morning in what appears to be police use of surveillance footage in combination with private and public records that identified @Anon4Justice and led to his employer. The activist had called in sick to work Friday to take part in a protest of Urban Shield, an expo for SWAT teams, military contractors and police officers from all over the world. Urban Shield, coordinated by the Alameda County Sheriff’s Office, exists under the guise of fighting terrorism and “disaster preparedness” in heavily-populated areas.

DN! This is a rush transcript. Copy may not be in its final form. AMY GOODMAN: We end today’s show in Madison, Wisconsin, with Matt Rothschild, editor and publisher of The Progressive magazine. He was arrested Thursday when covering a protest at the Wisconsin Capitol against Governor Scott Walker. Matt Rothschild was arrested on a misdemeanor obstruction and resisting arrest charge and released on $300 bail after photographing the arrests of other demonstrators singing in the rotunda. He wrote about the experience in an article called "[Governor Scott] Walker’s Cop Nabs Me for Being a Reporter.

" Twitter Locks Out Police From Protest Surveillance Tools Used To Spy On Activists. Twitter has blocked access to a tool that the police use to monitor the social network for protest-specific keywords. The real-time surveillance monitored users of the micro-blogging social media network to build a map of protest-related activities. Essentially, Twitter has severed ties with a social network surveillance firm that offered these tools using the data mined from the platform. Twitter has terminated access to its user data for Media Sonar, a company that made and marketed tools to U.S. police departments. The Canadian company peddled its service for thousands of dollars. Filmmaker Charged with Three Felony Counts for Documenting Direct Action Against Tar Sands Pipeline.

Copyright information corporate logos. Civil Liberties Defense Center. FiVo Film - Policing the police by Fluxtechsolutions - Dribbble. Disklabs Digital Forensics and Data Recovery. Police may not look at digital information on a cell phone when someone is arrested unless the police have a warrant to do so. 2012: Supreme Court held that a GPS tracking device on a vehicle to monitor the individual’s movement, that conduct constitutes a search under the Fourth Amendment. Policing the Police: Your Right to Record Law Enforcement   Hey, MSM: All Journalism is Advocacy Journalism. Yellowstone Oil Spill Missing from Keystone XL Coverage On CNN, Fox.

28 CFR 50.10 - Policy with regard to the issuance of subpoenas to members of the news media, subpoenas for telephone toll records of members of...media, and the interrogation, indictment, or arrest of, members of the news media. Donald Trump’s Real Threat to the Press. Democracy Now! Mobile. ‘Declaration of war’: North Yorkshire fracking approval sparks outrage. 12.20.16... Records Governing Off-the-Record Communications [regulations.gov]