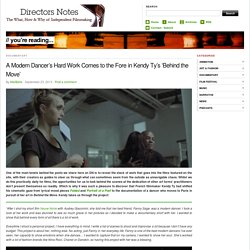 Whilst we do this practically daily for films, the opportunities for us to look behind the scenes at the dedication of other art forms’ practitioners don’t present themselves so readily. Which is why it was such a pleasure to discover that French filmmaker Kendy Ty had shifted his cinematic gaze from lyrical mood pieces Folded and Portrait of a Poet to the documentation of a dancer who moves to Paris in pursuit of her art in Behind the Move. Kendy takes us through the project: “After I shot my short film Veuve Noire with Audrey Giacomini, she told me that her best friend, Fanny Sage, was a modern dancer. Lv. How I Film and Edit My Videos. In this video I break down my production and post production process for filming my show. 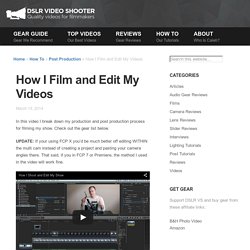 Check out the gear list below. UPDATE: If your using FCP X you’d be much better off editing WITHIN the multi cam instead of creating a project and pasting your camera angles there. That said, if you in FCP 7 or Premiere, the method I used in the video will work fine. Support DSLR Video Shooter If you purchase gear through my site You will be supporting future content on my show. Cameras I usually use 2 of my 3 cameras to film my videos.

Lenses I use a mixed bag of lenses, but I find that one of the following 3 are always in play. Audio I usually go straight to the camera with my audio. Grip and Accessories Editing Conclusion. In the Trenches With Darren Aronofsky: The Fountain & The Wrestler Full Making-Of. If you’ve one of mentorless.com avid readers, you are aware of my admiration for Darren Aronofsky and his body of work. 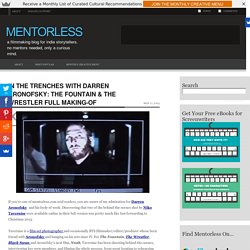 Discovering that two of the behind-the-scenes shot by Niko Tavernise were available online in their full version was pretty much like fast forwarding to Christmas 2013. Tavernise is a film-set photographer and occasionally BTS filmmaker/editor/producer whose been friend with Aronofsky and hanging on his sets since Pi. For The Fountain, The Wrestler, Black Swan and Aronofsky’s next film, Noah, Tavernise has been shooting behind-the-scenes, interviewing key crew members, and filming the whole process, from scout locating to rehearsing to shooting etc. Both The Fountain and The Wrestler had their own sets of challenge and required persistence and creativity from the whole cast and crew. Aronofsky makes bold choices, and as Libatique likes to repeats interviews after interviews, he pushes people so they give their best and go beyond their confort zone. 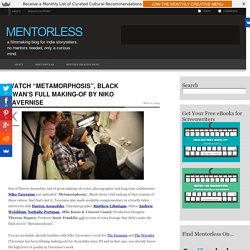 And that’s not it, Tavernise also made available complementary in a fourth video interviews with Darren Aronofsky, Cinematographer Matthew Libatique, Editor Andrew Weisblum, Nathalie Portman, Mila Kunis & Vincent Cassel, Production Designer Therese Deprez, Producer Scott Franklin and 20 min of extra footage that didn’t make the final cut for “Metamorphosis”. You are probably already familiar with Niko Tavernise’s work for The Fountain and The Wrestler (Tavernise has been filming making-ofs for Aronofsky since Pi) and in that case, you already know the high level of quality in Tavernise’s work. Metamorphosis takes it to the next level in terms of scale not only by the quality of the visual but also by the number of collaborators interviewed throughout the whole filmmaking process. ILM Breaks Down the Epic VFX for 'Captain America: The Winter Soldier' & 'Transformers: Age of Extinction' We just saw some fantastic examples of subtle VFX being used for practical purposes in Gone Girl, but that doesn't mean big-budget spectacle VFX is any less impressive. 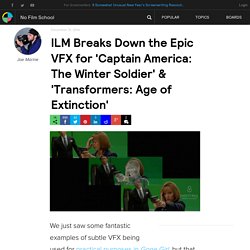 Over at Industrial Light & Magic's terrific YouTube channel, they break down VFX for some of their biggest projects. Two of the most recent videos focus on Captain America: The Winter Soldier and Transformers: Age of Extinction: Watch How the Masters Used to Create VFX for Movies in These ILM Videos. Back before VFX became a computer-only affair (for the most part), creating post effects required dealing with lots of physical elements. 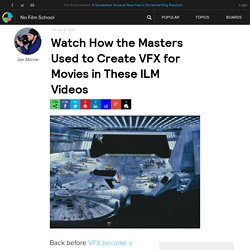 Christopher Nolan Reveals Some of the Practical Effects Used for 'Interstellar' Many of Christopher Nolan's films deal with fantastical elements, but he likes to ground things in reality as much as possible, both on-screen and on-set. 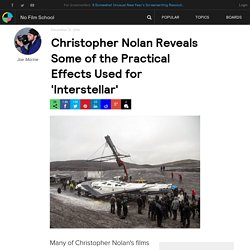 In the video below, he talks about how he keeps things as real as possible for the actors and the audience: Here is a BTS photo showing off the full-size ship and the hydraulic system used to simulate movement for the actors: Nolan has been very vocal about trying to keep things as realistic as he can, even if he's shooting a scene that is supposed to take place on another planet or in space. While CG elements can very often blend right in, if the thing you're showing is already real, you don't have to worry about hiding anything. This is obviously not a new technique, and projection has been used for many, many years, but actors often talk about being able to get into their characters better when they have something real to react to as opposed to green screen and their imaginations.

Insane 'Edge of Tomorrow' BTS Video Shows How Little CGI Was Used During Many Scenes. WATCHED. MoVI M10 - Behind The Scenes - Steady Cam Camera Stabilizer Rig. How To Fake An Olympics. Whether Mr. 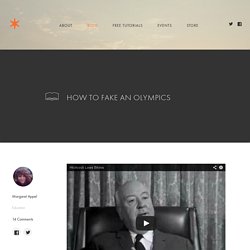 Hitchcock is really a kind-hearted family man or just an old pervert, we may never know. But this simple demonstration of the Kuleshov effect does a great job of illustrating something we do know: what people actually see on screen and what they think they see can be two very different things, and it’s the ability play with the latter that will really allow you to work some magic as a filmmaker. Now, if you know anything about Stillmotion, you know that we don’t often aim to “work magic,” but rather to document magic as it naturally unfolds, without having to fake anything. We’ve trained countless hours to avoid using intervention as a means to tell great stories — instead, we get in front of things as they are happening. This is a beautiful thing when you’re telling a real story — but what happens when you are trying to tell a story that you can’t physically access? Sometimes you just *have* to fake it. Wow, it’s like we were really there!