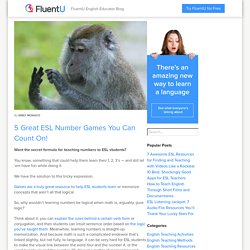 You know, something that could help them learn their 1, 2, 3’s — and still let ’em have fun while doing it. We have the solution to this tricky expression. Games are a truly great resource to help ESL students learn or memorize concepts that aren’t all that logical. So, why wouldn’t learning numbers be logical when math is, arguably, pure logic?

Think about it: you can explain the rules behind a certain verb form or conjugation, and then students can intuit sentence order based on the logic you’ve taught them. Games work very well when it comes to the memorization of new terms. The best way to use games in an ESL classroom setting is to use them repeatedly. Fizz Buzz Fizz Buzz was originally a game used to teach native English speakers division and factors, but it works just as well with older students who’ve already acquired this knowledge in their native tongue. This challenging game is bound to get any student motivated! Bingo. The Alphabet Song - ESL Kids Games. Discover more alphabet activities for kids. 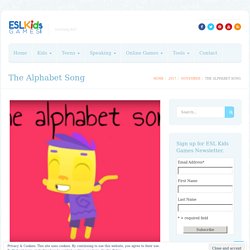 You know the tune, sing along with me… But wait! 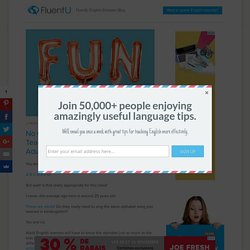 Is that really appropriate for this class? I mean, the average age here is around 25 years old. These are adults! Do they really need to sing the same alphabet song you learned in kindergarten? Yes and no. Adult English learners will have to know the alphabet just as much as the kids you teach. Learning the ABCs in English is actually probably one of the easiest tasks you’ll have in your ESL classroom.

It’s highly unlikely that any adult (or kid for that matter!) We’ll take a look at five ways you can help your students master their ABCs, both by naming letters and by spelling out words. You’ve probably spent some time going over the alphabet with your students in the traditional, alphabetical way, teaching them how to pronounce the name of each letter. 1. This is a random warm-up activity you can use in early classes until students have a pretty good grasp on the majority of English letter names.

You need: Instructions: 2. 3. 4. 5. Tips for teaching English to Arabic speakers. Erica Dirou, a teacher trainer at the British Council in Egypt, outlines the challenges and offers some tips and suggestions. Teaching English to Arabic speakers offers you the chance to learn about the Arabic language and understand first-hand some of the linguistic and cultural differences between Arabic and English speakers. But it's a good idea to get some background on Arabic learners before starting out on a new teaching adventure. Learning English is important for Arabic speakers English-language learning is hugely important in most Arabic-speaking countries, and most people begin English classes at some point in primary school, although increasingly it is being introduced to pre-schoolers.

Private schools often offer bilingual or English-medium programmes and many universities use English as the language of instruction, or at least have English as an entry requirement. English is an absolute necessity in the multinational working environments of many Arabic-speaking countries. 1.