Solving the puzzle of the periodic table - Eric Rosado 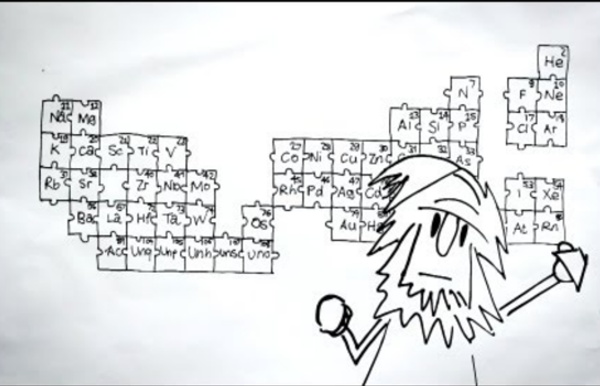 Periodic Table Battleship I have posted a lot about Chemistry lately. My oldest has been studying it and really enjoying it. I love his science-y mind! BBC Bitesize - KS3 Chemistry - The periodic table - Revision 1 All the different elements are arranged in a chart called the periodic table . A Russian scientist called Dmitri Mendeleev produced one of the first practical periodic tables in the 19th century. The modern periodic table is based closely on the ideas he used: the elements are arranged in order of increasing atomic numberthe horizontal rows are called periodsthe vertical columns are called groupselements in the same group are similar to each other

The science of static electricity - Anuradha Bhagwat You can see the effects of static electricity everywhere. The effects of static electricity are seen when an insulating material such as plastic, rubber, or wool is involved. Which materials lose electrons readily depends on the inner structure of materials themselves and how tightly the electrons are bound. iPads + Water Rockets = Fun Science & Math Lesson This morning I stopped by my friend Mike Morrell’s 9th grade science class. It was water rocket launch day so I knew it would be a fun day. Mike’s students have been working on rocket designs and building their rockets for a while. The Periodic Table's Endangered Elements Click to enlarge We’re all familiar with the periodic table, but the majority of non-chemists probably aren’t familiar with the everyday uses of some of the many elements it contains. Some elements that many haven’t heard of find uses in technologies or applications we take for granted – but the supplies of these elements on Earth are not infinite. Today’s graphic, in a collaboration with the American Chemical Society’s Green Chemistry Institute, looks at some of the endangered elements in the periodic table, and why we might miss them when they’re gone. In total, the graphic shows 44 elements whose supply is at risk. For some, the risk is more serious than for others – but there are 9 elements shown in this table for which there is concern that there is a serious threat to their supply within the next 100 years, and a further 7 for which there is a rising threat due to increased use.

How batteries work - Adam Jacobson Several advancements soon followed the Voltaic pile. British chemist John Frederic Daniell replaced the salt water with a solution of copper sulfate, which would be reduced into pure copper on the surface of the copper. The copper was no longer a flat plate, but a copper pot that held the solution, a zinc rod, and a porous earthenware pot separating them. The Daniell cell could generate up to 1.1 Volts without the hydrogen gas problem, a vast improvement on Volta’s short-living pile that measured only 0.8 volts. 40 Of The Best Science Podcasts For Mobile Learning In 2013, you don’t need to find a radio to listen in on quality broadcast programming. A laptop, MP3 player, tablet, or even a smartphone will work just as well. Even better, there is a wealth of content out there that’s both educational and entertaining, including some pretty amazing shows on scientific topics that are equally interesting to the layman and the professional.