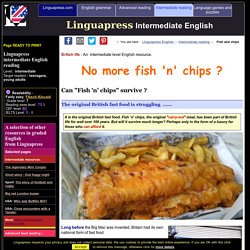 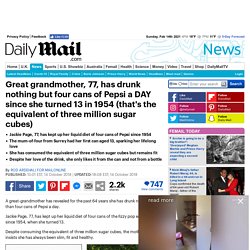 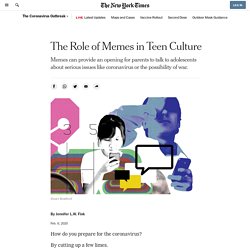 In her new book “Boys & Sex,” Peggy Orenstein writes that boys often use the word “hilarious” as “a safe haven; a default position when something is inappropriate, confusing, upsetting, depressing, unnerving, or horrifying … ‘hilarious’ offers distance, allowing them to subvert a more compassionate response that could be read as weak, overly sensitive, or otherwise unmasculine.” A response like Ms. Brown’s tearful outburst after her son’s insensitive comments can be a way to “break through that mask of bravado,” Dr. Manly said. In fact, Ms. Of course, children should never feel responsible for an adult’s behavior.

But don’t be scared to express emotion, even (or maybe especially) if your child seems stone-faced. “There are times they’re not able to cry, and I feel my eyes watering,” Dr. How do carbohydrates impact your health? - Richard J. Wood. Interested in knowing more about the glycemic index? 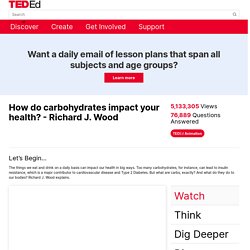 The glycemic index is a ranking system that depicts the glycemic response (change in blood glucose) caused by a food. The index was originally created to help people with Type 2 Diabetes make better food choices, but has been used in many additional settings including cardiovascular health and sports performance. The glycemic index of a food can vary depending on meal composition, cooking or processing measures, ripeness, etc. Furthermore, the glycemic index does not take in to account the amount of food chosen (i.e. a bite of white bread and an entire loaf of white bread has the same glycemic index).

As such, an additional system called the "glycemic load" was subsequently created. Metabolic syndrome is a constellation of symptoms that increase your risk of developing cardiovascular disease or Type 2 diabetes. Insulin resistance is a condition where the body makes insulin, but the tissues response to that insulin is blunted. Sugar: Hiding in plain sight - Robert Lustig. When you eat something loaded with sugar, your taste buds, your gut and your brain all take notice. 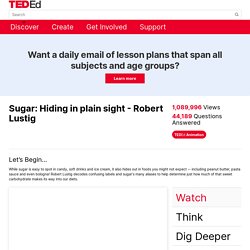 This activation of your reward system is not unlike how bodies process addictive substances such as alcohol or nicotine -- an overload of sugar spikes dopamine levels and leaves you craving more. Nicole Avena explains why sweets and treats should be enjoyed in moderation.For all the TED-Ed Lessons about food (and eating it too), check out this series: You are what you eat.Dr. Lustig assesses the health dangers of sugar and its link to Type 2 diabetes and the global obesity epidemic. He is the author of several books and many articles on childhood obesity, including the recent "Obesity Before Birth. " REPORTED SPEECH. Exercise on Embedded Questions with Explanation. Reported Speech. Grammar - Intermediate to upper intermediate. Look at these examples to see how we can tell someone what another person asked. 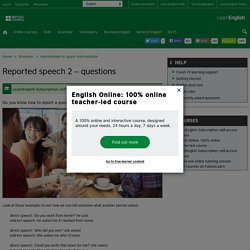 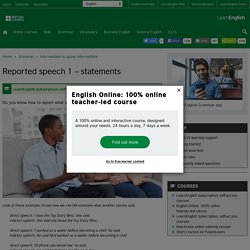