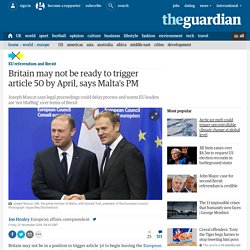 Joseph Muscat, whose country takes over the EU’s rotating presidency in January, also warned EU leaders were “not bluffing” when they insist Britain would not get enhanced single market access if it also wanted to curb immigration, adding that the European parliament could veto any deal. The supreme court will hear in early December a government appeal against a high court ruling that parliament must be consulted before article 50 can be invoked, which Theresa May has promised will happen before April. Muscat told the BBC he would “not be surprised” if the legal proceedings resulted in the divorce process being delayed, particularly since the supreme court could in theory decide to refer a final decision to the European court of justice. 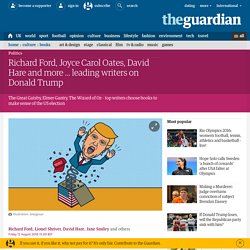 As a Mississippi kid who was glad the south had lost the war (100 years before!) And who felt that slavery was a blight on American history we would do well to try to “live beyond”, I thought Shelby’s insistence was a lot of hooey intended to prove the south’s undeserved centrality to all things American. In my naive view, the south and “southern values” were a garish anomaly, not typical of what America stood for – those values expressed in the Declaration of Independence. I maintained this view until I unexpectedly experienced the American right wing’s irrationally hostile opposition to the Obama presidency.

Court to decide authenticity of Peter Doig painting as artist denies he made it. Testimony in an unusual federal court case will continue on Tuesday as artist Peter Doig attempts to prove that he did not create a 40-year-old painting signed “Pete Doige”. 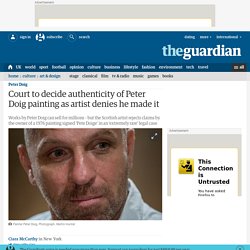 The Scottish artist denies having painted the landscape scene, apparently completed in 1976, which the painting’s owner insists is a Doig original. Robert Fletcher and art dealer Peter Bartlow filed suit in 2013 after Doig refused to authenticate the painting when the pair tried to sell it. Harcourt Chambers - Member Profile.

Alicia is a well-respected family lawyer with wide-ranging experience of all aspects of family law. 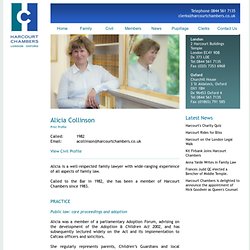 Called to the Bar in 1982, she has been a member of Harcourt Chambers since 1983. Public law: care proceedings and adoption Alicia was a member of a parliamentary Adoption Forum, advising on the development of the Adoption & Children Act 2002, and has subsequently lectured widely on the Act and its implementation to Cafcass officers and solicitors. She regularly represents parents, Children’s Guardians and local authorities, at High Court and County Court hearings, ranging from one to fifteen days, often against Leading Counsel. Euan Ferguson: 'I think,' I stuttered... 'I think I've had a stroke' Voice that made coma victim weep. What Being A Single Father Taught Me About Feminism. Clandestine HUMINT asset recruiting. The term spy refers to human agents that are recruited by case officers of a foreign intelligence agency. 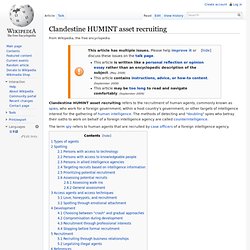 Types of agents[edit] Acquiring information may not involve collecting secret documents, but something as simple as observing the number and types of ships in a port. Even though such information might be readily visible, the laws of many countries would consider reporting it to a foreign power espionage. Other asset roles include support functions such as communications, forgery, disguise, etc. According to Victor Suvorov, a former Soviet military intelligence officer, his service had Soviet officers, under diplomatic or nonofficial cover, handling two kinds of agent: basic and supplementary.[1] Basic agents can be formed into groups with leaders, or report directly to the controller. 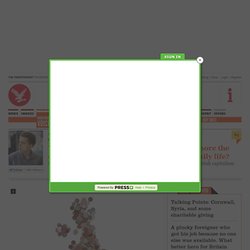 Economics professor Mariana Mazzucato’s The Entrepreneurial State shows how – to take just one example – the Apple iPhone brings together a dazzling array of state-funded innovations: like the touchscreen display, microelectronics, and the global positioning system. Was Lord Kitchener Murdered? A Jewish Conspiracy - Political Conspiracies.

In the spring of 1916 Herbert Asquith decided to send Lord Kitchener, his Secretary of State of War, to Russia in an attempt to rally the country in its fight against Germany. 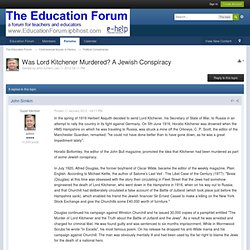 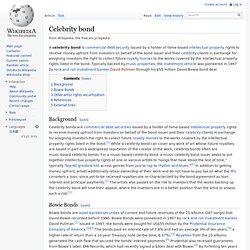 Bowie Bonds were pioneered in 1997 by rock and roll investment banker David Pullman.[1] Issued in 1997, the bonds were bought for US$55 million by the Prudential Insurance Company of America.[2][3] The bonds paid an interest rate of 7.9% and had an average life of ten years,[4] a higher rate of return than a 10-year Treasury note (at the time, 6.37%).[3] Royalties from the 25 albums generated the cash flow that secured the bonds' interest payments.[5] Prudential also received guarantees from Bowie's label, EMI Records, which had recently signed a $30m deal with Bowie.[3] By forfeiting ten years worth of royalties, David Bowie was able to receive a payment of US$55 million up front. Other artist rights securitization[edit] References[edit] External links[edit] Man accused of bludgeoning wealthy client to death 'lived the high life' A wealthy man was found lying in a pool of blood after being bludgeoned to death by his financial adviser, who conned him out of hundreds of thousands of pounds to fund a life of luxury, a court has heard. 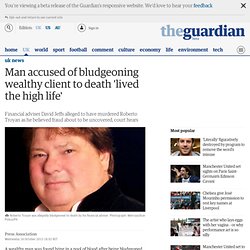 David Jeffs, 36, is accused of stealing £343,000 intended for investments from under the nose of client Roberto Troyan to live the high life, Croydon crown court was told. When Troyan's funds started to dry up, and Jeffs feared his fraud was about to be discovered, he murdered the 63-year-old during a visit to his Mayfair apartment, the prosecution claim. Troyan, who was left a vast sum of money when his civil partner died, had been beaten over the head in his kitchen so forcefully that his skull was fractured, the jury was told. Medics attending the crime scene in central London on 8 March thought Troyan had been shot, his injuries were so severe.

In praise of cynicism. If there's one thing that makes me cynical, it's optimists. 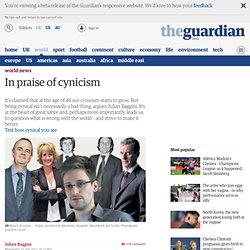 Transcript of Andrew Mitchell's meeting with police officers. 10 reasons not to trust claims national security is being threatened by leaks. Ever since they were set up more than a hundred years ago Britain's security and intelligence agencies have been accused of using the excuse of "national security" to suppress information. Whenever information has been disclosed against their will, through leaks or whistleblowers, they have claimed security has been jeopardised.

Agencies are said to have consistently used this argument to protect themselves from embarrassment and to suppress evidence of information relating to a wide range of subjects, from government waste to involvement in torture. Ministerial claims that the publication of reports based on NSA and GCHQ documentation undermined national security prompted a scathing response from United Nations experts on freedom of expression and human rights.

"The press plays a central role in the clarification of human rights abuses. It is clear that the revelations on the extensive mass surveillance initiatives implemented by some governments needs to be widely debated. " Why the return of growth doesn't prove that Balls was wrong. When the GDP figures are published tomorrow morning at 9:30am, the cry will go up from the Tories and their media allies that Ed Balls's credibility has been destroyed. They might not like Ed Miliband, but they reserve a special animus for the shadow chancellor. For them, the return of growth proves that Balls's critique of George Osborne's austerity programme was fundamentally wrong; Labour will not be taken seriously until he is thrown overboard. Decent wages or a breadline economy: it's a no-brainer.

Ed Miliband's speech at Battersea power station in London on Tuesday this week attracted a lot of attention. Not least because of the Labour leader's own choice of battleground for the 2015 election, the debate has focused on his ideas about wages: his proposal to raise minimum wages in sectors such as finance, and to provide tax breaks for firms that pay living wages. The reactions have been predictable. Many people are up in arms against the very idea that the government may "artificially" raise wages through market intervention. Many, including a former adviser to Tony Blair, solemnly warn that this will create unemployment and hurt British companies – or, to be more precise, companies that operate in Britain, as so few are owned by British citizens nowadays. A typical reaction came from John Cridland, the director general of the CBI, who said in a BBC interview that employers "pay what they can afford to pay, depending on the income they get from the consumers".

Occupy Wall Street activists buy $15m of Americans' personal debt. A group of Occupy Wall Street activists has bought almost $15m of Americans' personal debt over the last year as part of the Rolling Jubilee project to help people pay off their outstanding credit. Rolling Jubilee, set up by Occupy's Strike Debt group following the street protests that swept the world in 2011, launched on 15 November 2012.