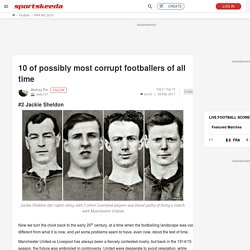 Body found in search for Briton missing since Hamburg stag weekend. The body of a Scottish man who went missing on a stag weekend in Hamburg has been found, according to a charity helping his family. 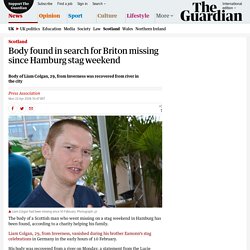 Liam Colgan, 29, from Inverness, vanished during his brother Eamonn’s stag celebrations in Germany in the early hours of 10 February. His body was recovered from a river on Monday, a statement from the Lucie Blackman Trust said. The charity, which helps the families of those missing abroad, said: “The Lucie Blackman Trust is saddened to confirm that a body found in the river Elbe, Hamburg, is that of Liam Colgan, missing after attending his brother’s stag weekend in the German city.

“Whilst formal identification is yet to be carried out, Mr Colgan’s driving licence was in the pocket of the jacket, and the clothes were those he was wearing the night he disappeared. “The trust asks that Mr Colgan’s family be given space and privacy to grieve at this difficult time.” “Our thoughts are of course with Liam’s family and friends today.” … we have a small favour to ask.

Two Jewish Berlins, Divided by the Wall – The Forward. In the fall of 1972 I moved to Berlin from Frankfurt, Germany, to begin my studies at the Free University, which was founded in 1948 in the American zone. 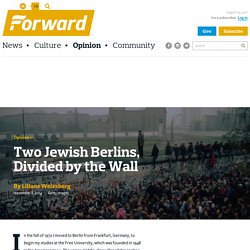 The upper-middle-class villas of this section of town had not been bombed during World War II; they had once been owned by well-to-do Jews who had perished. Space was available. Berlin’s established university was located in the city’s center in the Soviet zone, and obviously, the allies did not regard that institution as “free” — the Cold War was on. Moreover, the Eastern part of the city seemed far away. Berlin had gained a new city center around the Kurfürstendamm, and in regard to the former owners of the buildings where I studied, no questions were asked. How two sisters uncovered heartbreak in their grandfather’s envelope designs. When Brenda Fitch was two, her paternal grandfather sent her a letter with a prediction. 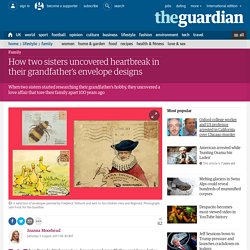 “I know,” he wrote, “that your dear Dada and Mamma are keeping a book of envelopes for you, and I have no doubt when you reach the age of 21 you will consider them interesting.” Frederick Tolhurst, Brenda’s grandfather, was an amateur artist and the envelopes that he was referring to were illustrated by him with colourful, child-friendly designs. And he was correct: later in her life, Brenda would indeed find them fascinating. The opera-loving sisters who 'stumbled' into heroism. Between 1934 and 1939, two "nervous British spinsters" were regular visitors to the opera houses of Germany and Austria. 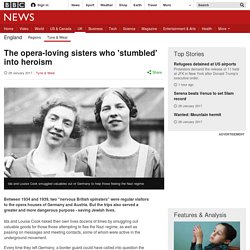 But the trips also served a greater and more dangerous purpose - saving Jewish lives. Ida and Louise Cook risked their own lives dozens of times by smuggling out valuable goods for those those attempting to flee the Nazi regime, as well as passing on messages and meeting contacts, some of whom were active in the underground movement. Every time they left Germany, a border guard could have called into question the ownership of the furs and jewellery they were draped in, putting the sisters in peril of arrest and imprisonment - and worse. They met one contact almost under the nose of several high-ranking Nazi officials, when he got in touch with them at their hotel - one of Hitler's lunchtime haunts - asking them to rush outside and jump into his taxi.

Image copyright Getty Images. This is what happens when an AI-written screenplay is made into a film. Artificial intelligence has recently been trying its hand at various human creative endeavours, from cooking to art, poetry to board games, but nothing is quite as surreal as a robot writing the script for a science fiction movie – until now. 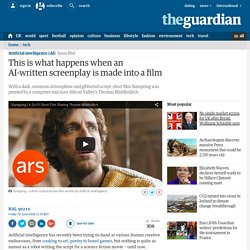 The script and movie were the product of director Oscar Sharp and Ross Goodwin, a New York University AI researcher. Prove it. Pension Freedom - Martin Lewis 5 minute briefing. The 6 April 2015 saw the most radical changes to private pensions for a generation. 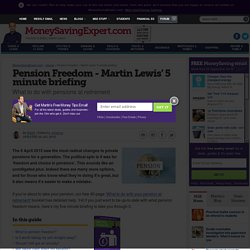 The political spin is it was for ‘freedom and choice in pensions’. This sounds like an unmitigated plus. Walter Irving Scott. Early life[edit] Born in Providence, Rhode Island on July 1, 1895 he was the son of a British engineer, Edward Augustus Scott, and his Scottish wife Jessie Barnes Smith. 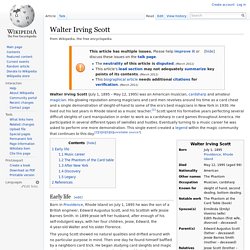 In 1899 Jessie left her husband, after enough of his self-indulgent ways, with her four children, Jesse, Edward, the 4-year-old Walter and his sister Florence. The young Scott showed no natural qualities and drifted around with no particular purpose in mind. Then one day he found himself baffled by a neighbors card trick. He began studying card sleights and magic and entered some talent contests when he was 12. Aged 17 Scott began to travel the states to find out "what the cardsharps actually do". Music career[edit] Scott gave up working with cards in 1924 to focus on his love of music. Louis Malle Questions British Cuisine in 1975. Study Plan for Intermediate Players: The Opening! Target Skill Range: Intermediate (Rated 1400-1799) Acquire the knowledge you need to approach the opening with confidence and achieve success! 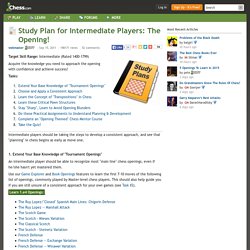 Tasks: Intermediate players should be taking the steps to develop a consistent approach, and see that "planning" in chess begins as early as move one. 1. Extend Your Base Knowledge of "Tournament Openings" 100 funny jokes by 100 comedians. Sorry, David Cameron, but your British history is not mine. The people confront the king in the Peasants' Revolt of 1381, 'when ordinary folk rose in rebellion at a poll tax. 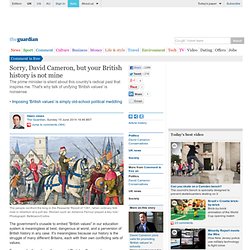