Vegetarian and vegan diets can be healthy ones depending upon how they are implemented, if they are supplemented and on the genetic make-up of those who eat them. These posts go into some of the details, so if this is you, you can be healthy.

Pressure on Annals of Internal Medicine

EAT Lancet Paper. Why Vegans Could Be at Risk of Bone Fractures. Oxford study reveals potential pitfalls A study published in November 2020 on 54,898 people living in the UK,1982 of whom were vegan, found a greater risk of total and hip fractures in vegans compared to meat eaters after an average follow-up of 17.6 years.1. 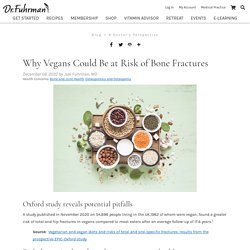 Impossible Burger Health Risks - What you need to know. Yet another company has appeared to try and capture the market share of plant-based foods that are to be substituted for unhealthy foods that are regularly consumed on the standard American Diet (SAD). 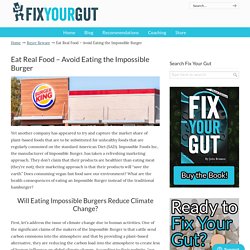 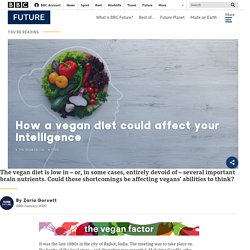 “I’m sure that if you are knowledgeable, careful, and obsessive about it – and you have all the right personality characteristics to be this way – then it is possible to have a healthy diet as a vegan,” he says. “But it is distinctly possible that you could have deficiencies.” Cofnas takes a harsher view. Though vegans can take supplements, he thinks it’s unrealistic to expect that they all will. Consequently, he finds the recent shift towards plant-based diets troubling, though he’s sympathetic to the arguments for doing so. Why the Optimal Human Diet Includes Animal Protein. In this episode, we discuss: My upcoming appearance on The Joe Rogan ExperienceWhy plant protein doesn’t measure up to animal proteinWhere protein really comes fromHow much protein athletes needProtein intake for non-athletesWhat protein quality isSix nutrients that are missing from plant protein Show notes: Chris Kresser RHR: Why the Optimal Human Diet Includes Animal Protein. 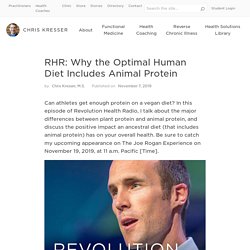 Three Ways You May be Sabotaging Your Plant-based Eating (and Not Even Know It!) Vegetarian Low-Carb Inspiration - Recipes & Meal Plans. Do Vegetarians and Vegans Live Longer than Meat Eaters? 15 High-Protein Vegetables To Help Your Body Repair Cells and Make New Ones. Study: Vegan Diet Causes More Than 500 Genes to Change in 3 Months. Impossible Burger: Is It Good or Bad for You?

Popping up on popular social media platforms and restaurant menus around the nation, the Impossible Burger boasts a taste, texture, aroma and appearance nearly identical to a regular hamburger, but with a plant-based and eco-friendly twist. 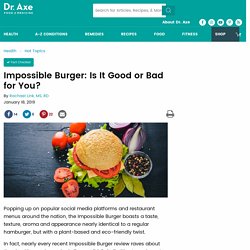 In fact, nearly every recent Impossible Burger review raves about the shocking and seemingly “impossible” similarities to real meat, earning it its unique name. In addition to delivering a delicious meat-like flavor, it also packs a punch when it comes to nutrition and uses significantly less water, land and resources than regular meat to minimize its environmental impact. Five Groups of Vegan and Vegetarian High-Protein Foods. There is no single food that every vegan or vegetarian has to eat to get needed protein. 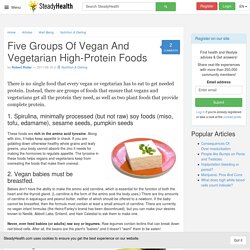 Instead, there are groups of foods that ensure that vegans and vegetarians get all the protein they need, as well as two plant foods that provide complete protein. 1. Spirulina, minimally processed (but not raw) soy foods (miso, tofu, edamame), sesame seeds, pumpkin seeds These foods are rich in the amino acid tyrosine. Along with zinc, it helps keep appetite in check. Vegan Diet Benefits, Vegan Diet Risks & How to Follow One. Vegans choose to avoid eating all animal products for a combination of reasons, which typically include better health, easier weight loss or maintenance, protection against chronic diseases, and even a positive effect on the world around them. 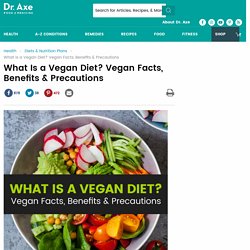 Those are just some of the benefits of a vegan diet. In contrast, each year, the average American consumes more than 200 pounds of meat and poultry, which is about three times the global average. In addition, the average adult living in the U.S. consumes 607 pounds of milk, cheese and other dairy products each year, plus around 79 pounds of fat a year (including some from low-quality animal products), a whopping 22 pounds more than consumed in the 1980s. (1) One of the biggest problems facing us today is that the mass production of factory-farmed animal products usually doesn’t take into account the welfare of either the animals involved or us, the consumers.

Following a vegan diet is one way to avoid the dangers of conventional meat and dairy. Mycoprotein: Beneficial Vegan Protein or Dangerous Allergen? By Rachael Link, MS, RD Do you know what’s hiding in your favorite meat substitutes? 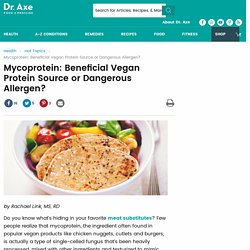 Few people realize that mycoprotein, the ingredient often found in popular vegan products like chicken nuggets, cutlets and burgers, is actually a type of single-celled fungus that’s been heavily processed, mixed with other ingredients and texturized to mimic the taste and texture of meat. Does Vegetarian Collagen Exist? I’ll start with the bad news: There are no vegetarian collagen sources. Every collagen supplement you see on the shelf came from a living organism. Though somewhere down the line someone will probably grow legitimate collagen in a lab setting, it’s not available today or for the foreseeable future. Why I Experimented With Veganism (… well, I ate more Plant Proteins…) and What Happened – Victoria Fenton Healthcare. This is a double-post, both here and on the Paleo In The UK website. 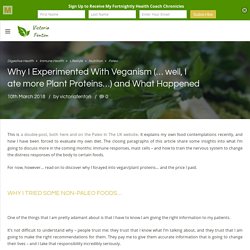 It explains my own food contemplations recently, and how I have been forced to evaluate my own diet. The closing paragraphs of this article share some insights into what I’m going to discuss more in the coming months: immune responses, mast cells – and how to train the nervous system to change the distress responses of the body to certain foods. For now, however… read on to discover why I forayed into vegan/plant proteins… and the price I paid. One of the things that I am pretty adamant about is that I have to know I am giving the right information to my patients. It’s not difficult to understand why – people trust me: they trust that I know what I’m talking about, and they trust that I am going to make the right recommendations for them. Why You Should Eat Meat: My Appearance on the Joe Rogan Experience. Problems with Song et al Animal Protein vs Plant Protein study. Here we have another study from the hydra-headed monster that is the Harvard school of public health's interpretation of the NHS and HPFS studies. 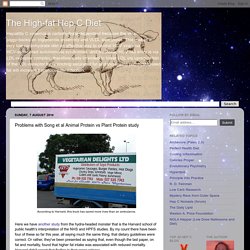 By my count there have been four of these so far this year, all saying much the same thing, that dietary guidelines were correct. Or rather, they've been presented as saying that, even though the last paper, on fat and mortality, found that higher fat intake was associated with reduced mortality. Harvard didn't report that finding in their press release. An Open Letter To Vegans Of The World. 8 Proven Reasons Why Vegan and Vegetarian Diets Easily Ruin Your Body. Why I Am No Longer Vegan. University of Graz Study Finds Vegetarians Are Unhealthier, More Mentally Disturbed Than Meat-Lovers. Does This Specific Genetic Test Help You Decide Whether to Eat Paleo or Vegetarian? Podcast with Dr. Alon Keinan. Please read the title of this blog again: this is how this research finding has been positioned in the press. As you will learn here, it’s not quite that simple. Here is our take on this important new genetic finding and how you can ue this information to make more informed dietary choices.

One of the fundamental tenets of the Paleo diet is that dietary changes associated with the introduction of agriculture and animal husbandry (ca. 10000 years ago) occurred too recently for the modern human genome to fully adapt. This is likely true but we also know, for instance, that the ability to digest lactose into adulthood (lactase persistence) is more prevalent in parts of the world where people domesticated animals and relied upon milk as a source of nutrition.

Among other factors, this is probably because there was selection pressure for the mutation that enabled people to consume milk in those areas. A (somewhat oversimplified) primer on essential fatty acids. Your Brain on Creatine. Are you a vegetarian or a vegan? Besides vitamin B12, depending upon what you eat and the supplements you take, you can find your diet somewhat low in zinc, long chain omega 3 fatty acids, and even some amino acids. One of these amino acids is called creatine, and the best source is meat. What the Health Review: 3 Misses of the Vegan Documentary. Betraying the Science on Vegan Nutrition. Top 5 Supplement Recommendations for Vegetarians. DHA, Veganism and Brain Health. Vegetarianism and Nutrient Deficiencies. Why Vegan Diets Fail - 180 Degree Health. Veganism. QUANTITATIVE MEDICINE. Pros and Cons of a Vegetarian Diet with Kristie Middleton. You're a Vegetarian, Have You Lost Your Mind? 20 Nutrients that Vegans and Vegetarians Aren't Getting Enough of.

Vegan diets are often praised for their health benefits. Myths of Vegetarianism - The Weston A. Price Foundation. 12 Mistakes to Avoid on a Vegetarian or Vegan Diet. Evolutionary Psychiatry: Here We Go Again: Vegetarian Diets and Mental Health. One of the primary messages out of public health agencies and nutrition gurus from Walter Willett to Michael Pollan is to eat more plants.

And, indeed, in many studies, vegetarian* diets are associated with better cardiovascular health, lower BMI, and better health behaviors (less likely to smoke, drink, and participate in shady Rock and Roll activities). Is vegetarianism healthy for children?: Critical Reviews in Food Science and Nutrition: Vol 0, No 0. How vegetarians bad-mouth themselves! – Rosemary Cottage Clinic Blog. Heart of the Matter: Plant-Based Diets Lead to High Homocysteine, Low Sulfur and Marginal B12 Status. The China Study. Welcome to the Official Roundup Page for all my blog posts pertaining to T. Denise Minger Refutes the China Study Once and For All. Denise Minger's Refutation of Campbell's "China Study" Generates Continued Debate.