Vegetable Oils Cause Obesity. Researchers debate the fundamental causes of the obesity epidemic, and dietary changes are the most likely reasons. 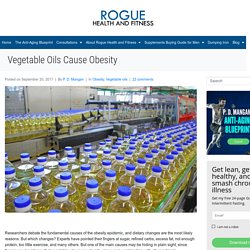 140+ Scientifically Proven Ways to Lose Weight That Don't Include exercise — MyBioHack. Whole Health Source: Peripheral vs. Ectopic Fat. I went to an interesting presentation the other day by Dr. 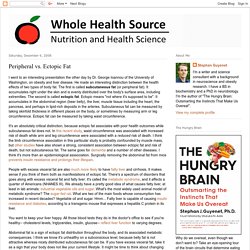 George Ioannou of the University of Washington, on obesity and liver disease. He made an interesting distinction between the health effects of two types of body fat. The first is called subcutaneous fat (or peripheral fat). It accumulates right under the skin and is evenly distributed over the body's surface area, including extremities. Water Weight: Does It Change When Changing Diets? Does It Matter? Brown Fat: Losing Weight Through Thermogenesis. During World War I, it was discovered that many of the chemicals for new explosives had toxic or even lethal effects on the workers in the munitions factories. 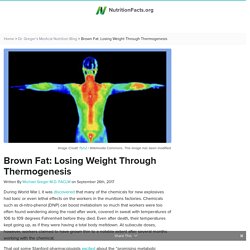 Chemicals such as di-nitro-phenol (DNP) can boost metabolism so much that workers were too often found wandering along the road after work, covered in sweat with temperatures of 106 to 109 degrees Fahrenheit before they died. Even after death, their temperatures kept going up, as if they were having a total body meltdown. At subacute doses, however, workers claimed to have grown thin to a notable extent after several months working with the chemical. That got some Stanford pharmacologists excited about the “promising metabolic applications” of DNP. Our resting metabolic rate jumps up 30% after one dose of DNP, and therefore, it becomes an actual fat-burning drug.

It did work, but the therapeutic index—the difference between the effective dose and the deadly dose—was razor thin. Boosting Brown Fat Through Diet. Until about ten years ago, brown adipose tissue (BAT) was considered to be biologically active only in babies and small children where it generates heat by burning fat. 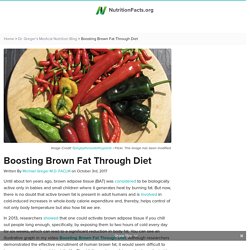 But now, there is no doubt that active brown fat is present in adult humans and is involved in cold-induced increases in whole-body calorie expenditure and, thereby, helps control of not only body temperature but also how fat we are. In 2013, researchers showed that one could activate brown adipose tissue if you chill out people long enough, specifically, by exposing them to two hours of cold every day for six weeks, which can lead to a significant reduction in body fat. You can see an illustrative graph in my video Boosting Brown Fat Through Diet. Although researchers demonstrated the effective recruitment of human brown fat, it would seem difficult to increase exposure to cold in daily life. How to Get Rid of Visceral Fat. How Excess Body Fat Causes Chronic Fatigue, And The Science Of Fat Loss - The Energy Blueprint. 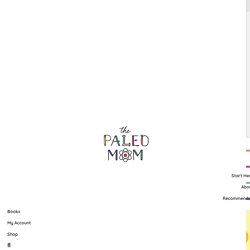 Actually, there is… and it’s called portion control! Okay, that doesn’t sound very glamorous and you might associate the concept of portion control with some pretty negative things, like deprivation, calorie counting, and feeling hungry. New Scientific Study: Calories Matter. Do low-carb diets have a “metabolic advantage” for weight loss? 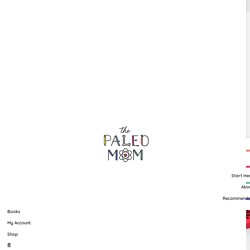 That’s the million-dollar question! For years, some prominent health figures have proposed that low-carbohydrate and ketogenic diets help us burn more body fat even when we eat the same number of calories (or more) as we do on higher-carbohydrate diets. This belief comes partly from the carbohydrate-insulin hypothesis of obesity, which proposes that dietary carbohydrates drive up insulin levels, which in turn leads to greater fat storage. Take away the carbohydrates (and lower the insulin levels), and we’re able to metabolize fat and increase our energy expenditure—so the theory goes! 8 Ways Nutrient Deficiencies Cause Weight Loss Resistance. “Dr. 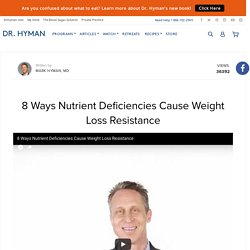 Hyman, I’ve eliminated toxic foods, I exercise every day, and overall I live a healthy lifestyle, yet I haven’t been able to get anywhere near my goal weight,” writes this week’s house call. “What gives?” I understand how frustrating this can become, especially when you feel like you’ve tried everything. You made a conscious decision to live a healthier lifestyle. You’ve cut out toxic triggers, ditched sugar and you’re eating all the right types of foods. Over the years, I’ve had many patients complain about this problem. One big obstacle becomes nutritional imbalances. Studies show these deficiencies are more widespread than you might imagine. Simply put, Americans have been overfed and undernourished for a very long time. Obesity and its connection to micronutrient deficiency – the evidence is becoming stronger. Obesity is a significant problem in the modern world, affecting over 78 million adults in the United States alone! 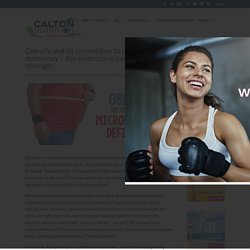 But what if obesity could be prevented? In our first book, Naked Calories, we hypothesized that science would find micronutrient deficiency at the root of the overweight/obesity epidemic. So we wanted to highlight a recent study that is finding just that. 10 Nutrients that Can Help You Burn Fat. Vitamin D Deficiency Is The Cause of Common Obesity. Low Vitamin D Linked to Obesity, Low HDL, and Increased Cardiovascular Risk. Vitamin D Status Linked to Dieting Success. 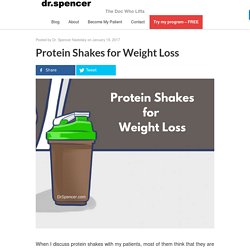 They believe that drinking them will add BULK. The truth is, protein shakes can be one of the most powerful tools you use for fat loss! The common belief of protein shakes is that meat head bodybuilders drink them and since they are big and muscular, that is what is going to happen to everyone who drinks them. While they are good for building muscle (if you aren’t getting enough protein in your diet), they are equally good for losing massive amounts of fat. Instead of ADDING a shake or two in addition to your daily meals, you actually REPLACE a meal (or two) with a shake. By doing this, you automatically lower your calorie intake while likely increasing your protein intake in one of the most convenient ways possible. In fact, studies show that drinking meal replacement shakes are one of the best predictors of weight loss success. Here are some examples I use with my patients. Lunch. Is High Protein Actually Bad During Weight Loss? (Interview with Stephan Guyenet, Ph.D.) 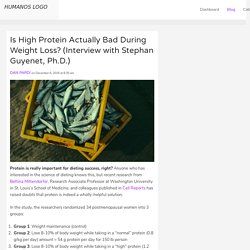 Why Dietary Fat Is Fattening, and When It's Not. On February 24, 2015 at 11:50 am Recently, I wrote an article entitled Reducing stress in the hypothalamus – is this the best way to decrease body fat? In that article, I discussed how inflammation of the brain’s body-fat regulator – or ‘fat thermostat’ – is of critical importance for weight management. In this article, I discuss how certain dietary patterns affect inflammation in the fat thermostat, as well as short-and-longer term outcomes of different diet types. At the end of the article, I consider how to reflect this study against broad dietary choices we make, and I also link to a recent radio show where I answer audience questions about health and weight control with Robb Wolf and Stephan Guyenet, PhD. Remember from the first article that if the fat thermostat becomes insensitive to signals it relies on to keep the quantity of body fat stable, then the result is that fat mass gets ratcheted up to a new, higher stable point.

A study by David McNay and John Speakman explored this. Certain Dietary Fats Disrupt the Coordination of Metabolism, Others Don't. On April 8, 2016 at 7:44 pm This is my second article on food and the circadian system. The science of body timing rhythms is complicated. But, like diet and exercise, it’s worth investing some mental effort to understand the fundamental aspects of it because not only is it crucial to health and wellbeing, but also because it is a topic on which you can take action!

Circadian Rhythms The circadian rhythm is a complex system that helps our body coordinate physiology and behavior across a 24-hour period of a day. We can adjust our body timing without causing health problems (e.g., slow change of the seasons). Fuel Preference Changes across the Day In my previous article entitled When Is the Best Time to Eat, we discussed research on how enzymes that determine the rate of energy generation from glucose and fats wax and waned across the day.

Metabolic Control To maintain a healthy metabolism, our body must precisely regulate levels of circulating energy substances – like fats and sugars. What should I eat for weight loss? The Easiest Thing You Can Do for Weight Loss and Longevity. I had a patient not too long ago who struggled to lose weight. A quick look at her food journal revealed why. To save calories, she skipped breakfast and simply sipped on coffee or one of those “skinny lattes” that actually contain a good bit of sugar.

She’s not alone. “I hate breakfast,” many patients candidly reply. 3 Weight Loss Hacks that Cut Cravings and Keep You Deeply Nourished – Real Food Forager. In my practice of clinical nutrition, over the years, I’ve seen many people who are more concerned with losing weight then improving their health. If you don’t focus on deeply nourishing foods, all your weight loss goals will get fouled up with temptation and cravings.

What is Temptation? Temptation is something that pulls you away from your goals. Legume Lunch - Dr. Spencer Nadolsky. Many of my patients have leftovers from dinner for their next day’s lunch. If that doesn’t happen though, they struggle choosing a healthy option. Double your Veggies and Halve your Starch - Dr. Spencer Nadolsky. 27 High-Fiber Foods to Fight Cravings. 6 No-Sacrifice Grocery Swaps for Weight Loss. We’ve said it before: Eating lean isn’t about deprivation, it’s about choosing smart alternatives. The great news is that some of those alternatives are better tasting and more filling, in addition to being better for you.

(And some seemingly superior foods, like skim milk, are in fact not so much.) Why Walnuts May Help You Stay Lean. 6 Metabolism Death Foods. There is nothing worse than starting an exercise program to burn fat, making some good diet changes, but still not seeing the results you want to see.