Bipolar Disorder. OCD. PTSD. Schizophrenia. Gluten and Mood Disorders. It's Not Mental. Food for the Brain. The Violence-Inducing Effects of Psychiatric Medication. New Link Between Inflammation and Mental Illness Found. Researchers set out to determine how chronic inflammation affects the brain and found a mechanism that directly links inflammation to mental illness Approximately three-quarters of those plagued by systemic lupus erythematosus endure neuropsychiatric symptoms. 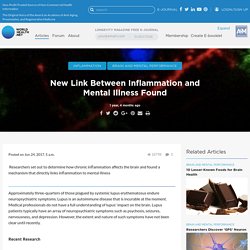 Lupus is an autoimmune disease that is incurable at the moment. Medical professionals do not have a full understanding of lupus' impact on the brain. Lupus patients typically have an array of neuropsychiatric symptoms such as psychosis, seizures, nervousness, and depression. However, the extent and nature of such symptoms have not been clear until recently. Recent Research Research fellow Allison Bialas, PhD, worked with Michael Carroll, PhD at Boston's Children's Hospital to determine if changes in lupus patients' immune systems are directly responsible for the symptoms of mental illness outlined above. Could Gluten Intolerance Symptoms Include Psychosis? New Link Between Inflammation and Mental Illness Found. "Is It Her Hormones?" A Case of Psychiatry Missing the Mark. The Whacky, Wild and Misleading World Of Neurotransmitter Testing - Primal Body Primal Mind. The Chemical Imbalance Myth. Throughout the checkered history of psychotropic drugs, one theory has been perpetuated: Many people believe means that the risks still outweigh the benefits of these psychoactive drugs, at least when it comes to depression. 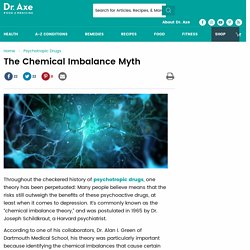 It’s commonly known as the “chemical imbalance theory,” and was postulated in 1965 by Dr. Joseph Schildkraut, a Harvard psychiatrist. According to one of his collaborators, Dr. Alan I. Green of Dartmouth Medical School, his theory was particularly important because identifying the chemical imbalances that cause certain psychiatric disorders would allow doctors to “identify different subgroups of patients with similar disorders through the study of biochemical processes.” (1) The original hypothesis was that depression was correlated with low norepinephrine and serotonin levels. Evolutionary Psychiatry: Borderline Personality Disorder and Glutamate. 5 Emotional Freedom Technique or EFT Tapping Benefits. Know anyone who uses EFT tapping to help fight depression or anxiety? 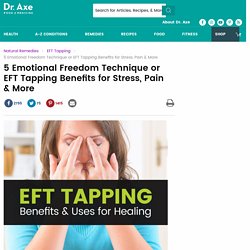 Wondering what “Emotional Freedom Technique” (or EFT) is all about, and how it works to manage tension in the body and worry in the mind? EFT tapping therapy was first introduced in the 1990s by a man named Gary Craig, who considered his approach to be an effective combination of mind-body medicine and acupressure techniques. The underlying principle of EFT is that all emotions and thoughts are forms of energy; this energy, whether positive or negative, has very real physical manifestations that affect all functions of the body.

6 Natural Alternatives to Psychiatric Drugs. Do you or a loved one take any so-called psychotropic drugs? 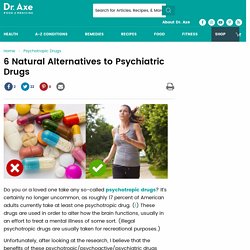 It’s certainly no longer uncommon, as roughly 17 percent of American adults currently take at least one psychotropic drug. (1) These drugs are used in order to alter how the brain functions, usually in an effort to treat a mental illness of some sort. (Illegal psychotropic drugs are usually taken for recreational purposes.) What is Morgellons Disease? Is it a physical or psychological condition? Last year, the U.S. 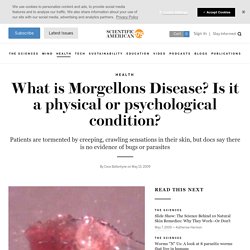 Centers for Disease Control and Prevention (CDC) launched a study of a curious and controversial condition known as Morgellons disease, which is characterized by creeping, crawling and stinging sensations under the skin. The project, whose goal is to identify possible risk factors and causes, was prompted by pressure from afflicted people, along with the advocacy groups and Congressmen that represent them, according to CDC spokesperson Lola Russell. Many in the medical community question whether Morgellons is an infectious disease or a psychiatric disorder. Natural Treatment Plan for Obsessive Compulsive Disorder. While the phrase, “don’t be so OCD,” gets thrown around in everyday conversation, many forget that it’s a serious disorder that affects many more than one would think. 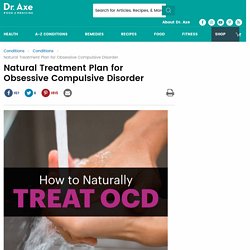 Approximately 2–3 percent of the adult population in the U.S has obsessive compulsive disorder (OCD), an anxiety disorder that is characterized by unwanted fears, obsessions and beliefs that drive compulsive behaviors. (1) Disclosure of the major causes of mental illness—mitochondrial deterioration in brain neurons via opportunistic infection. Evolutionary Psychiatry: Acne and Suicide. There have been many reports on acne, depression, and suicide over the years, mostly because a primary treatment for severe acne, isotretinoin (accutane), is known to increase the risk of depression and suicide. 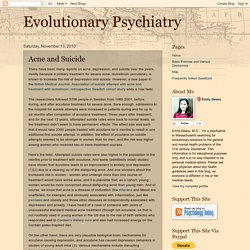 However, a new paper in the British Medical Journal, Association of suicide attemps with acne and treatment with isotretinoin: retrospective Swedish cohort study adds a new twist. The researchers followed 5756 people in Sweden from 1980-2001, before, during, and after accutane treatment for severe acne. Sure enough, admissions to the hospital for suicide attempts were increased in patients during and for up to six months after completion of accutane treatment. 10 Takeaways from Dr. Rangan Chatterjee’s Interview for Broken Brain. I often sing the praises of Functional Medicine, and I’m thrilled to see other doctors implement this way of thinking. 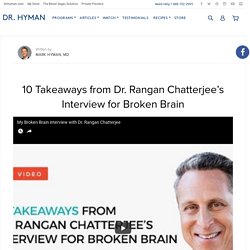 I’ve personally seen it transform the bodies and yes, brains, of thousands of patients. Unlike conventional medicine, Functional Medicine personalizes treatment based on a patient’s unique needs. Evolutionary Psychiatry: Is Some Psychiatric Disease a Manifestation of Lyme Disease? Hello there! 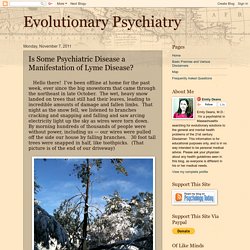 I’ve been offline at home for the past week, ever since the big snowstorm that came through the northeast in late October. Evolutionary Psychiatry: Is Postpartum Psychosis an Autoimmune Disease? Here's an article for the "everything is connected" file. 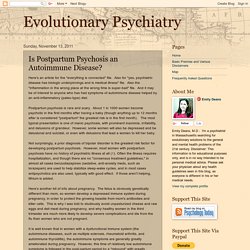 Also for "yes, psychiatric disease has biologic underpinnings and is medical illness" file. Also the "inflammation in the wrong place at the wrong time is super-bad" file. And it may be of interest to anyone who has had symptoms of autoimmune disease helped by an anti-inflammatory (paleo-type) diet.

Evolutionary Psychiatry: Thyroid and Psychiatric Illness. The thyroid is one of those glands that is hooked into everything. Mood, cognition, metabolism, bones, heart, cholesterol… all can be affected by perturbations among the thyroid hormones. 4 Natural Lifestyle Hacks To Fix Behavioral Issues And Mental Illness In Children (And Manage Your Energy As A Parent) with Dr. Nicole Beurkens, PhD - The Energy Blueprint. Here’s How to Heal Our Broken Brains with Nutrients. What leads to a broken brain? The Underlying Mechanisms of Brain Allergies - Tara Whitford, B.A.

The term “brain allergy” came into popular use several years ago to describe the phenomena of psychiatric symptoms related to substances in one’s diet and environment. This paper will focus on the role of nutrition in brain allergies. Evolutionary Psychiatry: B12 Deficiency and Psychosis, A Case Study. I'm a little few and far between here lately.

Besides the day job and the children, between my weekly class, natural disasters, and presenting (almost every week, it seems), all my spare time for looking up papers and blogging has been sucked away. I'm eager to engage on another bigger project instead of doing these posts on single papers, and in that vein I'm hopeful to pursue OCD and then a lot of work on eating disorders. If you are a stranger who has emailed me or commented on a specific clinical issue, I'm sorry, but I can't help you right now. If you have emailed me to follow up about some other issue, give me a week or two to get back to you, please. Evolutionary Psychiatry: More on Wheat and Serious Mental Illness. Evolutionary Psychiatry: Toxo and Suicide in Women. What To Do If You Have Seasonal Affective Disorder (aka The Winter Blues)