More Than 400 News Outlets Partner With A Project Seeking Media To Beef Up Climate Coverage Amid Pandemic. From The Daily Caller Chris White Tech Reporter April 16, 2020 8:41 PM ET A project co-founded by the Columbia Journalism Review is asking hundreds of news outlets to focus their reporting on climate change on Earth Day as journalists focus primarily on coronavirus coverage.The journalist heading the effort believes the media should be devoting the same level of attention to global warming as they do to a virus that has killed more than 100,000 people worldwide. 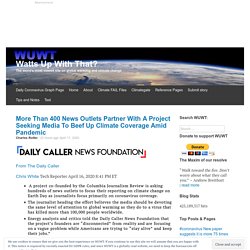 Energy analysts and critics told the Daily Caller News Foundation that the project’s founders are “disconnected” from reality and are focusing on a vague problem while Americans are trying to “stay alive” and keep their jobs.” Hundreds of media outlets, including Reuters, are partnering with a project seeking to devote a week of coverage to climate change amid a pandemic that has killed more than 140,00 people worldwide. Covering Climate Now’s partners published a deluge of climate-related news in September 2019 ahead of the U.N. Enviros Rally Around A Podcast Designed To Out Supposed Big Oil Propagandists. From The Daily Caller Chris White Tech Reporter January 30, 2020 3:39 PM ET. 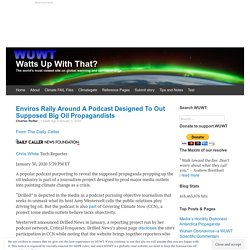 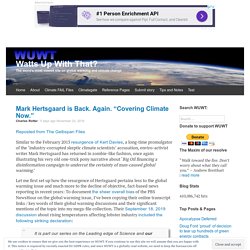 Let me first set up how the resurgence of Hertsgaard pertains less to the global warming issue and much more to the decline of objective, fact-based news reporting in recent years: To document the sheer overall bias of the PBS NewsHour on the global warming issue, I’ve been copying their online transcript links / key words of their global warming discussions and their significant mentions of the topic into my mega-file collection. Their September 18, 2019 discussion about rising temperatures affecting lobster industry included the following striking declaration: Inside The Media Conspiracy To Hype Greta Thunberg And The UN Climate Conference. * More than 200 media outlets and journalists partnered together with activists to coordinate and hype climate change news before the 2019 U.N. climate summit. 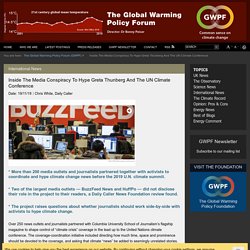 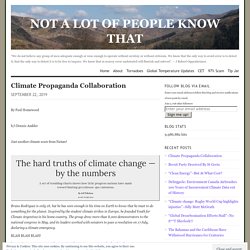 Bruno Rodriguez is only 18, but he has seen enough in his time on Earth to know that he must to do something for the planet. Inspired by the student climate strikes in Europe, he founded Youth for Climate Argentina in his home country. The group drew more than 8,000 demonstrators to the national congress in May, and its leaders worked with senators to pass a resolution on 17 July, declaring a climate emergency. Bur right at the bottom of the article, we see this: So, what is this Covering Climate Now? There isn’t much that focuses the mind like a deadline. That’s why Nature has joined Covering Climate Now, a collaboration between the world’s media organizations. If you’re wondering why we have been bombarded with climate scare stories in the last week, it is the result of deliberate conspiracy. Mind you – we seem to be bombarded every week! Like this: Like Loading... 3 weeks to go til Climate Propaganda Week starts. Did you get the memo? 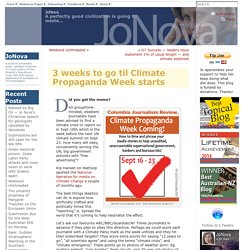 Which journalists are “just following orders”? All groupthink-minded, obedient journalists have been advised to find a climate crisis to report on in Sept 16th which is the week before the next UN climate summit on Sept 23. How many will obey, conveniently serving the UN, big government activists with “free advertising”? Kip Hansen on WattsUp spotted the National Narrative for media on Climate Change a couple of months ago. The best things skeptics can do is expose how artificially crafted and politically timed this “reporting” is. Let’s ask our favourite ABC/BBC/Guardian/NY Times journalists in advance if they plan to obey this directive. Climate Catastrophe News Cabal Ramps Up. Guest Essay by Kip Hansen. 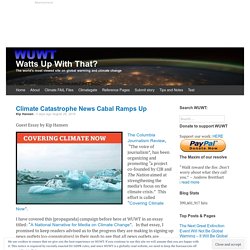 A National Narrative for Media on Climate Change. Guest Opinion by Kip Hansen Those of you who closely watch the media — newspapers, broadcast & streaming news, national magazines, national public radio — may have noticed that all the news about climate change is beginning to sound the same — regardless of outlet (there are a few sensible exceptions). 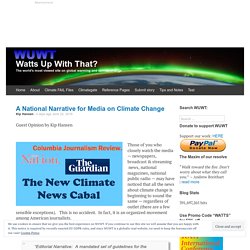 This is no accident. In fact, it is an organized movement among American journalists. I have written here before about the Editorial Narratives at the New York Times. Here’s the working definition I proposed for Editorial Narrative: “Editorial Narrative: A mandated set of guidelines for the overriding storyline for any news item concerning a specified topic, including required statements, conclusions and intentional slanting towards a particular preferred viewpoint. In that essay, I quoted Michael Cieply when, in November 2016, he told the world about the NY Times’ Editorial Narratives: