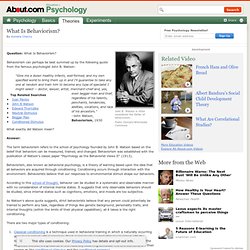 Behaviorism can perhaps be best summed up by the following quote from the famous psychologist John B. Watson: "Give me a dozen healthy infants, well-formed, and my own specified world to bring them up in and I'll guarantee to take any one at random and train him to become any type of specialist I might select -- doctor, lawyer, artist, merchant-chief and, yes, even beggar-man and thief, regardless of his talents, penchants, tendencies, abilities, vocations, and race of his ancestors. " --John Watson, Behaviorism, 1930 What exactly did Watson mean? GSI Teaching & Resource Center. Behaviorist teaching methods have proven most successful in areas where there is a “correct” response or easily memorized material. 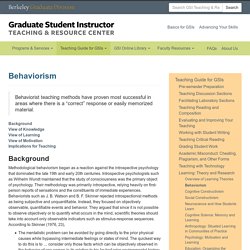 BackgroundView of KnowledgeView of LearningView of MotivationImplications for Teaching Background Methodological behaviorism began as a reaction against the introspective psychology that dominated the late 19th and early 20th centuries. Skinner 1953 Behaviorism. Moxley 2004 The Philosophy of Behavior Analysis. Moore 1999 Conceptual Foundations of Radical Behaviorism. Ledoux 2003 An Introduction to the Philosophy Called Radical Behaviorism .pdf. Instruction in Functional Assessment pdf. Hayes & Brownstein 1986 Mentalism, Behavior Behavior Relations, and a Behavior Analytic View of the Purposes of Science. 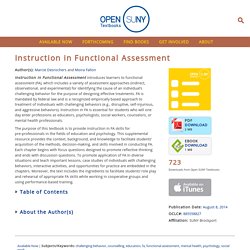 Research on the behavioral principles that have been shown to account for the occurrence of challenging behaviors is summarized. The risk factors contributing to individuals’ challenging behaviors and the context in which they occur are explored to lay the groundwork for the need for effective assessment and treatment methods. Chapter 2: The Methodology of Functional Assessment: Process and Products This chapter defines functional assessment and describes why this approach is useful.

Chapter 3: Treatment Implications Based on the Functional Assessment Consideration is given to the relevant factors involved in making treatment selections based on current research and function of the individual’s challenging behaviors. Talking About Behavior. Tab06. Do you really understand selection by consequences? By Todd A. 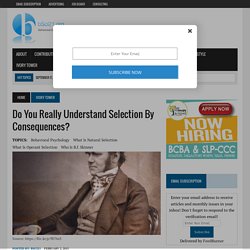 Ward, PhD, BCBA-D Founding Editor, bSci21.org B. F. Skinner is best known for the development of operant conditioning — the process by which the consequences of our behavior affect the future probability of its recurrence given particular antecedent conditions. In other words, Skinner thought of those behaviors which are reinforced and recur more often in the future to be “selected” by those consequences. Kids Get Control Over Bedtime With The Bedtime Pass. When I first heard about the New York Times bestseller called Go The F— to Sleep, my only wish was that I had written it, because I sure thought it a thousand times when my kids were little. 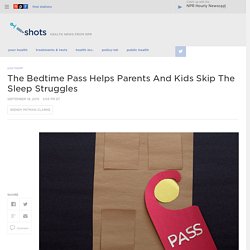 And clearly, so have millions of other parents who face that time of day with equal parts dread and exhaustion: bedtime. But there is hope — and it comes in the form of a solution that is so simple, and thus far so successful, you will be smacking your forehead wondering, "Why didn't I think of that? " (Sort of like me and that book.) It's called "the bedtime pass," and it works like this: Every night, parents give their child a five-by-seven card that is the bedtime pass. They explain to their child that the pass is good for one excused departure from the bedroom per night, whether that's to use the bathroom, get one more hug, report a scary dream, whatever. That's it. Using Behavioral Science Insights to Better Serve the American People. A growing body of evidence demonstrates that behavioral science insights -- research findings from fields such as behavioral economics and psychology about how people make decisions and act on them -- can be used to design government policies to better serve the American people. 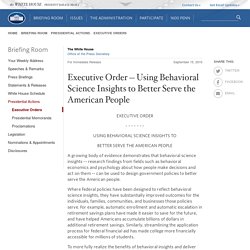 Where Federal policies have been designed to reflect behavioral science insights, they have substantially improved outcomes for the individuals, families, communities, and businesses those policies serve. For example, automatic enrollment and automatic escalation in retirement savings plans have made it easier to save for the future, and have helped Americans accumulate billions of dollars in additional retirement savings. Similarly, streamlining the application process for Federal financial aid has made college more financially accessible for millions of students. 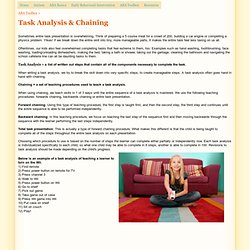 Think of preparing a 5 course meal for a crowd of 200, building a car engine or completing a physics problem. Yikes! If we break down the entire skill into tiny, more manageable parts, it makes the entire task feel less taxing on us all. Oftentimes, our kids also feel overwhelmed completing tasks that feel extreme to them, too. Examples such as hand washing, toothbrushing, face washing, loading/unloading dishwashers, making the bed, taking a bath or shower, taking out the garbage, cleaning the bathroom and navigating the school cafeteria line can all be daunting tasks to them. Task Analysis = a list of written out steps that contain all of the components necessary to complete the task.