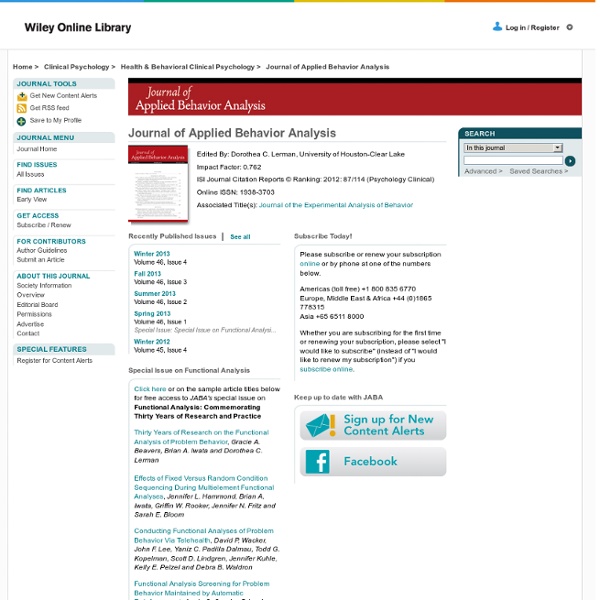 Task Analysis & Chaining - Kansas City Behavior Analysts Sometimes entire task presentation is overwhelming. Think of preparing a 5 course meal for a crowd of 200, building a car engine or completing a physics problem. Yikes! If we break down the entire skill into tiny, more manageable parts, it makes the entire task feel less taxing on us all. Oftentimes, our kids also feel overwhelmed completing tasks that feel extreme to them, too. Examples such as hand washing, toothbrushing, face washing, loading/unloading dishwashers, making the bed, taking a bath or shower, taking out the garbage, cleaning the bathroom and navigating the school cafeteria line can all be daunting tasks to them.

The iPad as RTI Intervention Toolkit While waiting for the iPad to arrive in my reading intervention classroom, I’ve had a lot of time to think and plan how I will use the device. Ground Rules I don’t want hundreds of apps. I’m looking for a few favorites. I don’t want more drill and kill. The reading intervention programs I teach do their fair share of drilling and killing (to great success) so I don’t need more of the same. Functional Communication Training Overview of Functional Communication Training (FCT) Functional communication training (FCT) emerged from the literature on functional behavioral assessment (FBA) as a systematic practice to replace inappropriate behavior or subtle communicative acts with more appropriate and effective communicative behaviors or skills. FCT is always implemented after an FBA has been conducted to identify the function of an interfering behavior.

Using Behavioral Science Insights to Better Serve the American People A growing body of evidence demonstrates that behavioral science insights -- research findings from fields such as behavioral economics and psychology about how people make decisions and act on them -- can be used to design government policies to better serve the American people. Where Federal policies have been designed to reflect behavioral science insights, they have substantially improved outcomes for the individuals, families, communities, and businesses those policies serve. For example, automatic enrollment and automatic escalation in retirement savings plans have made it easier to save for the future, and have helped Americans accumulate billions of dollars in additional retirement savings. Similarly, streamlining the application process for Federal financial aid has made college more financially accessible for millions of students. NOW, THEREFORE, by the authority vested in me as President by the Constitution and the laws of the United States, I hereby direct the following:

Facts, Autism Spectrum Disorders - NCBDDD Autism spectrum disorder (ASD) is a developmental disability( that can cause significant social, communication and behavioral challenges. There is often nothing about how people with ASD look that sets them apart from other people, but people with ASD may communicate, interact, behave, and learn in ways that are different from most other people. The learning, thinking, and problem-solving abilities of people with ASD can range from gifted to severely challenged. Some people with ASD need a lot of help in their daily lives; others need less. A diagnosis of ASD now includes several conditions that used to be diagnosed separately: autistic disorder, pervasive developmental disorder not otherwise specified (PDD-NOS), and Asperger syndrome. These conditions are now all called autism spectrum disorder.

Kids Get Control Over Bedtime With The Bedtime Pass When I first heard about the New York Times bestseller called Go The F— to Sleep, my only wish was that I had written it, because I sure thought it a thousand times when my kids were little. And clearly, so have millions of other parents who face that time of day with equal parts dread and exhaustion: bedtime. But there is hope — and it comes in the form of a solution that is so simple, and thus far so successful, you will be smacking your forehead wondering, "Why didn't I think of that?" (Sort of like me and that book.) It's called "the bedtime pass," and it works like this: Every night, parents give their child a five-by-seven card that is the bedtime pass.

Instruction in Functional Assessment Chapter 1: Challenging Behaviors of Individuals with Developmental Disabilities This chapter briefly describes the characteristics of individuals with developmental disabilities and the challenging behaviors frequently displayed by this population. Research on the behavioral principles that have been shown to account for the occurrence of challenging behaviors is summarized. The risk factors contributing to individuals’ challenging behaviors and the context in which they occur are explored to lay the groundwork for the need for effective assessment and treatment methods. GSI Teaching & Resource Center Behaviorist teaching methods have proven most successful in areas where there is a “correct” response or easily memorized material. BackgroundView of KnowledgeView of LearningView of MotivationImplications for Teaching Background Methodological behaviorism began as a reaction against the introspective psychology that dominated the late 19th and early 20th centuries. Introspective psychologists such as Wilhelm Wundt maintained that the study of consciousness was the primary object of psychology.