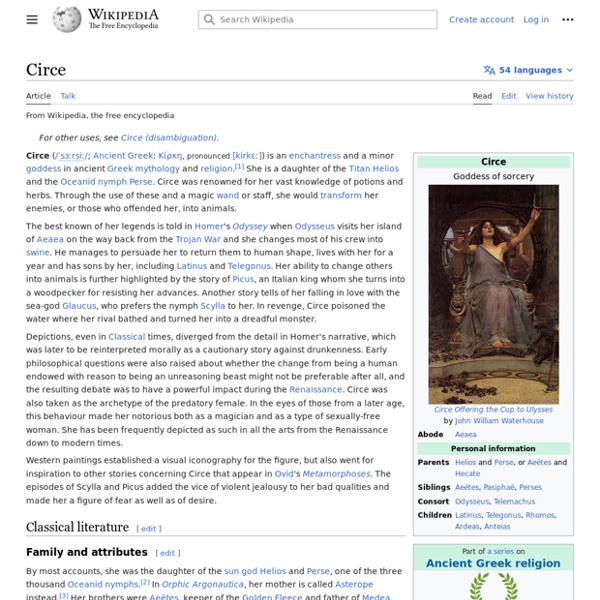 Depictions, even in Classical times, wandered away from the detail in Homer's narrative, which was later to be reinterpreted morally as a cautionary story against drunkenness. Early philosophical questions were also raised whether the change from a reasoning being to a beast was not preferable after all, and this paradox was to have a powerful impact during the Renaissance. Circe was also taken as the archetype of the predatory female. In the eyes of those from a later age, this behaviour made her notorious both as a magician and as a type of the sexually free woman. As such she has been frequently depicted in all the arts from the Renaissance down to modern times. Western paintings established a visual iconography for the figure, but also went for inspiration to other stories concerning Circe that appear in Ovid's Metamorphoses. Classical literature[edit] Homer's Odyssey[edit] Other texts[edit] Ovid's 1st-century Metamorphoses collects more transformation stories in its 14th book.

Shirt of Nessus In Greek mythology, the Shirt of Nessus, Tunic of Nessus, Nessus-robe, or Nessus' shirt was the poisoned shirt that killed Heracles. It was once a popular reference in literature. In folkloristics, it is considered an instance of the "poison dress" motif.[1] Mythology[edit] Metaphorically, it represents "a source of misfortune from which there is no escape; a fatal present; anything that wounds the susceptibilities"[3] or a "destructive or expiatory force or influence".[4] Simulacrum Representation or imitation of a person or thing A simulacrum (plural: simulacra from Latin: simulacrum, which means "likeness, similarity") is a representation or imitation of a person or thing.[1] The word was first recorded in the English language in the late 16th century, used to describe a representation, such as a statue or a painting, especially of a god. By the late 19th century, it had gathered a secondary association of inferiority: an image without the substance or qualities of the original.[2] Literary critic Fredric Jameson offers photorealism as an example of artistic simulacrum, where a painting is sometimes created by copying a photograph that is itself a copy of the real.[3] Other art forms that play with simulacra include trompe-l'œil,[4] pop art, Italian neorealism, and French New Wave.[3] Philosophy[edit]

Minos Mythological king of Crete The Minoan civilization of Crete has been named after him by the archaeologist Sir Arthur Evans. Etymology[edit] "Minos" is often interpreted as the Cretan word for "king",[1] or, by a euhemerist interpretation, the name of a particular king that was subsequently used as a title. There is a name in Minoan Linear A mi-nu-te that may be related to Minos. According to La Marle's reading of Linear A,[2] which has been heavily criticised as arbitrary,[3] we should read mwi-nu ro-ja (Minos the king) on a Linear A tablet.

Deianira Ancient Greek mythical character Deianira, Deïanira, or Deianeira[1] (/ˌdeɪ.əˈnaɪrə/;[2] Ancient Greek: Δηϊάνειρα, Dēiáneira, or Δῃάνειρα, Dēáneira, [dɛːiáneːra]), also known as Dejanira,[3] was a figure in Greek mythology whose name translated as "man-destroyer"[4] or "destroyer of her husband".[5][6] She was the wife of Heracles and, in late Classical accounts, his unwitting murderer, killing him with the poisoned Shirt of Nessus. She is the main character in Sophocles' play Women of Trachis. Mythology[edit] Family and marriage[edit] In Sophocles' account of Deianira's marriage, she was courted by the river god Achelous but saved from having to marry him by Heracles, who defeated Achelous in a wrestling contest for her hand in marriage.[8] In another version of her tale, Deianira is instead the daughter of Dexamenus, king of Olenus.

Khlysts Khlysts or Khlysty (Russian: Хлысты) was an underground sect, which existed from 1645 to the late 20th century. It split off the Russian Orthodox Church and belonged to the Spiritual Christians (духовные христиане) tendency. Ecstatic ritual of Khlysts ("radeniye") Definition[edit] 'Khlyst', the name commonly applied to them, is a distortion of the name they used. Strait of Messina The Strait of Messina (Italian: Stretto di Messina), is a narrow strait between the eastern tip of Sicily (Punta del Faro) and the western tip of Calabria (Punta Pezzo) in the south of Italy. It connects the Tyrrhenian Sea to the north with the Ionian Sea to the south, within the central Mediterranean. At its narrowest point, between Torre Faro and Villa San Giovanni, it is 3.1 km (1.9 mi) wide. At the town of Messina it is 5.1 km (3.2 mi) wide.

Deucalion Deucalion from "Promptuarii Iconum Insigniorum" Etymology[edit] According to folk etymology, Deucalion's name comes from δεῦκος, deukos, a variant of γλεῦκος, gleucos, i.e. "sweet new wine, must, sweetness"[2][3] and from ἁλιεύς, haliéus, i.e. Tantalus Greek mythological figure, son of Zeus Karagöl ("The black lake") in Mount Yamanlar, İzmir, Turkey, associated with the accounts surrounding Tantalus and named after him as Lake Tantalus Tantalus (Ancient Greek: Τάνταλος Tántalos) was a Greek mythological figure, most famous for his eternal punishment in Tartarus. He was also called Atys.

Megara Place in Greece Megara (; Greek: Μέγαρα, pronounced [ˈmeɣara]) is a historic town and a municipality in West Attica, Greece. It lies in the northern section of the Isthmus of Corinth opposite the island of Salamis, which belonged to Megara in archaic times, before being taken by Athens. Megara was one of the four districts of Attica, embodied in the four mythic sons of King Pandion II, of whom Nisos was the ruler of Megara. Megara was also a trade port, its people using their ships and wealth as a way to gain leverage on armies of neighboring poleis. Megara specialized in the exportation of wool and other animal products including livestock such as horses.

Jupiter Fifth planet from the Sun in the Solar System Formation and migration Astronomers have discovered nearly 500 planetary systems with multiple planets. Regularly these systems include a few planets with masses several times greater than Earth's (super-Earths), orbiting closer to their star than Mercury is to the Sun, and sometimes also Jupiter-mass gas giants close to their star.

autotelic English[edit] Etymology[edit] From Ancient Greek αὐτός (autós, “self”) +‎ τέλος (télos, “result; end”). Adjective[edit] Scylla In Greek mythology, Scylla[2] ( SIL-ə; Greek: Σκύλλα, pronounced [skýl̚la], Skylla) was a legendary monster that lived on one side of a narrow channel of water, opposite her counterpart Charybdis. The two sides of the strait were within an arrow's range of each other—so close that sailors attempting to avoid Charybdis would pass dangerously close to Scylla and vice versa. Scylla made her first appearance in Homer's Odyssey, where Odysseus and his crew encounter her and Charybdis on their travels.

Leto Greek mythological figure and mother of Apollo and Artemis The island of Kos is claimed to be her birthplace. However, Diodorus, in 2.47 states clearly that Leto was born in Hyperborea and not in Kos.[2] In the Olympian scheme, Zeus is the father of her twins,[3] Apollo and Artemis, which Leto conceived after her hidden beauty accidentally caught the eye of Zeus. Classical Greek myths record little about Leto other than her pregnancy and search for a place where she could give birth to Apollo and Artemis, since Hera in her jealousy caused all lands to shun her. She eventually found an island that was not attached to the ocean floor, therefore it was not considered land and she could give birth.[4] This is her only active mythic role: once Apollo and Artemis are grown, Leto withdraws, to remain a dim[5] and benevolent matronly figure upon Olympus, her part already played.

Know thyself Ruins of forecourt of the Temple of Apollo at Delphi, where know thyself was once said to be inscribed Allegorical painting from the 17th century with text Nosce te ipsum "The unexamined life is not worth living." In Latin the phrase, "know thyself," is given as nosce te ipsum[2] or temet nosce.[3]