What Happens to Social Media After a Twitter Revolution? Two years after the Arab Spring, questions still remain as to how much social media actually helped fuel and drive the uprisings that arose in Tunisia and swept across the region. 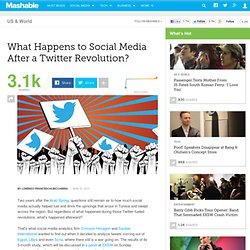 But regardless of what happened during those Twitter-fueled revolutions, what's happened afterward? That's what social media analytics firm Crimson Hexagon and Sanitas International wanted to find out when it decided to analyze tweets coming out of Egypt, Libya and even Syria, where there still is a war going on. The results of its 3-month study, which will be discussed in a panel at SXSW on Sunday, underscore the changes these countries are undergoing. "Nobody has really talked about what happens when people put their flags away and go home," Christopher Harvin, co-founder and partner at Sanitas International, told Mashable. Crimson Hexagon turned to Twitter and crafted specific keywords to analyze the tweets. The Internet Freedom Fallacy and the Arab Digital activism. Introduction This article focuses on grassroots digital activism in the Arab world and the risks of what seems to be an inevitable collusion with U.S foreign policy and interests. 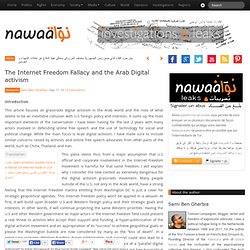 It sums up the most important elements of the conversation I have been having for the last 2 years with many actors involved in defending online free speech and the use of technology for social and political change. While the main focus is Arab digital activism, I have made sure to include similar concerns raised by activists and online free speech advocates from other parts of the world, such as China, Thailand, and Iran. This piece stems thus from a major assumption that U.S official and corporate involvement in the Internet Freedom movement is harmful for that same freedom.

I will explain why I consider the new context as extremely dangerous for the digital activism grassroots movement. Digital activists as new actors for change A new context Furthermore, big American web companies such as Google, Yahoo! From Arab Spring to global revolution. Two years on from the fall of Hosni Mubarak, the new Egyptian president is from the Muslim Brotherhood; on the streets of Cairo, the same kind of people who died in droves in 2011 are still getting killed. 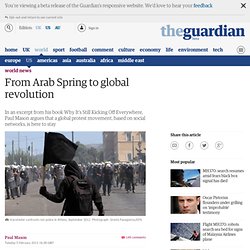 On the streets of Athens, the neo-Nazi party Golden Dawn is staging anti-migrant pogroms. In Russia, Pussy Riot are in jail and the leaders of the democracy movement facing criminal indictments. The war in Syria is killing 200 people a day. It's an easy step from all this to the conclusion that 2011, the year it all kicked off, was a flash in the pan. But wrong. Who are we? What is La Quadrature? 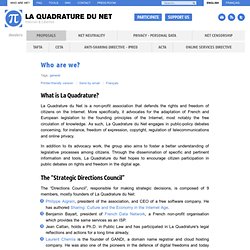 La Quadrature du Net is a non-profit association that defends the rights and freedom of citizens on the Internet. More specifically, it advocates for the adaptation of French and European legislation to the founding principles of the Internet, most notably the free circulation of knowledge. As such, La Quadrature du Net engages in public-policy debates concerning, for instance, freedom of expression, copyright, regulation of telecommunications and online privacy. In addition to its advocacy work, the group also aims to foster a better understanding of legislative processes among citizens. Magazine 52-53 : A Twitter revolution? What role has so-called social networking media played in the recent uprisings in North Africa and the Middle East and in new social movements in the West such as Occupy? 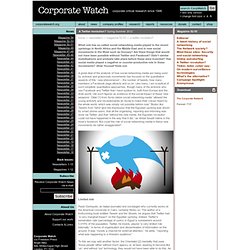 Are there things that would not have been possible without Twitter and Facebook? Didn't similar mobilisations and protests take place before these were invented? Has social media played a negative or counter-productive role in these movements? Shiar Youssef finds out. The new politics of the internet: Everything is connected.

The Dynamics of Protest Recruitment through an Online Network : Scientific Reports. The role that SNSs play in helping protests grow is uncontested by most media reports of recent events. 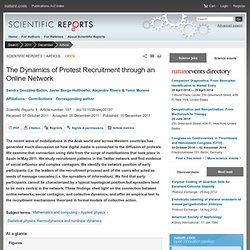 However, there is not much evidence of how exactly these online platforms can help disseminate calls for action and organize a collective movement. The Waves and Tides of Online Protests. Syria-Cyber-Wars-06-01-2012-proof2.pdf (application/pdf Object) Yousri Marzouki: Revolutionizing Revolutions: Virtual Collective Consciousness and the Arab Spring.

Discussions about the influence of social media often remind those on the impact of TV in the 1980s: Everyone has an opinion, some have statistics, and a few others are trying to understand the psychological and sociological mechanisms that lie beneath. The incredible connectivity amongst people that is provided by social media, combined with the speed at which information is exchanged and its potential global reach, have significantly empowered people. One way to have an estimate of this empowerment is to look at how users managed to "hijack" some social media platforms from their initial use. Twitter and Facebook users provide a spontaneous snapshot of their individual states of minds but, unintentionally, they also turn them into an incredible tool for collective estimates of behavioral dynamics (see, for example, a recent study on happiness) and crowdsourcing.

How the Arab World Uses Facebook and Twitter [INFOGRAPHICS] Social media has been often touted for the role it played in the popular uprisings that have spread across the Arab world since December 2010. 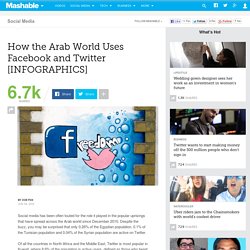 The Lessons of 2011: Three Theses on Organisation. Moving beyond the conceptual polarisation of tight-knit vanguardist parties and loose-tie virtual networks, Rodrigo Nunes sifts the residue of last year’s wave of revolts to produce a more nuanced picture of organisational dynamics in the age of Web 2.0 2011 was an exceptional year, one which could – hopefully – come to be remembered in the same breath as 1968 and 1848. 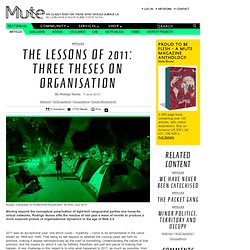 That being so will depend on whether the coming years will fulfil its promise, making it appear retrospectively as the start of something. Understanding the nature of that promise, and the means by which it can be fulfilled, therefore, are part and parcel of making that happen. A key challenge in this regard is to strip what happened in 2011, as much as possible, from false representations, both negative and positive, created by media coverage and the sometimes misleading reflections of protesters. 1.

It also says something about the crisis of representation, and how it will be a long time until it is solved. 2. 3. Defending Human Rights Worldwide. Spain: The “Indignados” of the 15M. This post is part of our special coverage Europe in Crisis. 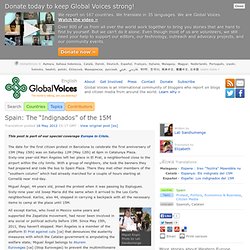 The date for the first citizen protest in Barcelona to celebrate the first anniversary of 15M (May 15th) was on Saturday 12M (May 12th) at 6pm in Catalunya Plaza. Sixty-one year-old Mari Ángeles left her place in El Prat, a neighborhood close to the airport within the city limits. With a group of neighbors, she took the banners they had prepared and rode the bus to Spain Plaza. There they met other members of the “southern column” which had already marched for a couple of hours starting at Cornellà near mid-day. Miguel Ángel, 44 years old, joined the protest when it was passing by Esplugues. Miguel Ángel. All except Karlos, who lived in Mexico some years and supported the Zapatista movement, had never been involved in any social or political activity before 15M.

Karlos has found an escape valve. Josep Maria. There's no need to ask Josep Maria what he's thinking: the banners that cover his body are very eloquent. Mari Ángeles. Iran, Facebook, and the Limits of Online Activism - By Cameron Abadi. A group of Iran's green movement activists had a grand and detailed vision for what was supposed to happen on Feb. 11. 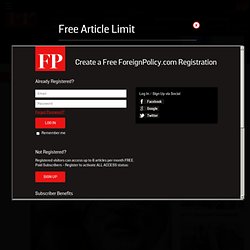 They called it a "Trojan Horse" strategy: Backers of opposition leader Mir-Hossein Mousavi, camouflaged in unassuming attire, would attend the official regime-backed rally commemorating the 31st anniversary of the Islamic Revolution. Then, at a pre-arranged time, they would assemble in front of the cameras of the foreign news media, reveal themselves as enthusiasts of the green movement, and denounce the brutality of the government for all the world to see. As we all know, however, there was no great reveal at the official rally: The plan didn't work, and Feb. 11 will be remembered by Iran's activists not as a triumph, but as a disappointment. Parag Khanna. Huffintgton Post | February 14, 2011 What others want for themselves is more important than what we want for them — always. Raise Your Voice Edition. The Egyptian Revolution is in intensive care – can it be saved?

How To Film Protests: Video Tip Series for Activists at Occupy Wall Street, in Syria and Beyond. The thousands of human rights-related videos being created and shared – from raw documentation of human rights violations in Syria to the Occupy protests and the range of police abuse and misconduct therein – illuminate the role that citizen video is playing to not only inform us but also to motivate us to take action. Now more than ever we need to ensure that the footage that we capture as activists incorporates essential information like the exact date, time and location so it may best be used by the media, as evidence, and for advocacy. Additionally, we need to pay special attention to the unique safety and security risks that we face as filmmakers and activists, as well as risks to those we capture in our footage. For example, in Syria we’ve seen the general practice of filming protesters from behind to ensure they are not identifiable when footage is played back at a slower rate.

Watch and Use Our “How-To Film Protests” Video Series. "Truth-O-Meter" Encourages Accountability in Serbia. The idea came to Vuka Crnjanski when she heard a government official say of a group illegally charging tolls on Serbia's highways: "It's OK to steal a little. This group just went too far. " "Such a statement should have gotten the minister in serious trouble," said Crnjanski, who had worked with NDI as a political party and civil society trainer and was formerly senior figure in Serbia's Liberal Democratic Party. "However, there was virtually no reaction to the statement from any political parties, government officials, NGOs or the media. " She was longing for accountability, and she wasn't alone. People Power 2.0. The force of laughter: Graffiti on a wall in Tripoli represents the Libyan leader, Colonel Qaddafi, as a fleeing rat.

After weeks of skirmishes in the Nafusa Mountains southwest of Tripoli, Sifaw Twawa and his brigade of freedom fighters are at a standstill. It’s a mid-April night in 2011, and Twawa’s men are frightened. Lightly armed and hidden only by trees, they are a stone’s throw from one of four Grad 122-millimeter multiple-rocket launchers laying down a barrage on Yefren, their besieged hometown.

Things I like - An Online Advocacy Code of Ethics. Drawing by Numbers. Data & Design How-to's Note 1: Where is your evidence? Print this page 100s of photographs of Indian women's clothing on hangers...Text messages recording street based violence...A collection of plastic objects dug out from the carcass of an albatross chick... ... all have something in common.They are all types of evidence that have become the basis of unusual and arresting visual advocacy campaigns.

Mobile Phones and Social Activism - An Ethan Zuckerman White Paper. Posted by KatrinVerclas on May 09, 2007 Ethan Zuckerman has written a solid overview of mobile phones in international activism.