8 Principles of Productive Gamification - Vander Ark on Innovation. Engaging Students with Game-Based Learning. Can Playing Video Games Help With Dyslexia? By Linda Poon, NPR Most parents prefer that their children pick up a book rather than a game controller. 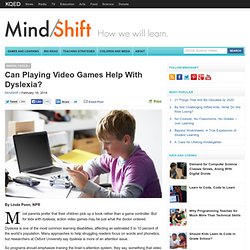 But for kids with dyslexia, action video games may be just what the doctor ordered. Dyslexia is one of the most common learning disabilities, affecting an estimated 5 to 10 percent of the world’s population. Many approaches to help struggling readers focus on words and phonetics, but researchers at Oxford University say dyslexia is more of an attention issue. So programs should emphasize training the brain’s attention system, they say, something that video games do. Center for Game Science.

Video games that teach science. ‹ Previous Next › Game: Cell Command In Cell Command, students embark on a series of exciting missions aboard a microscopic "cell ship. 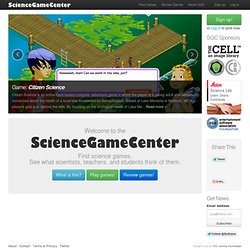 " At the outset, students operate a single station (e.g., the "ribosome station"), but eventually command all the ship's functions (e.g., duplication, membrane, mitochondria, golgi complex) simul... Transforming the Way We Learn: Four New Ways Kids Can Learn with Minecraft. Have your kids been swept up by the Minecraft craze? 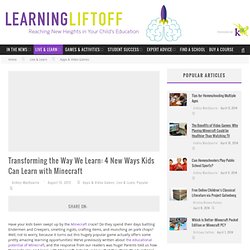 Do they spend their days battling Endermen and Creepers, smelting ingots, crafting items, and munching on pork chops? Well, not to worry, because it turns out this hugely popular game actually offers some pretty amazing learning opportunities! We’ve previously written about the educational potential of Minecraft, and the response from our readers was huge!

Parents told us how their kids play and learn with Minecraft, kids let us know that they think it’s educational too, and teachers shared the ways they’ve used the game with their students. Virtual Worlds/Digital Media and its Impact on Education. The following discussion is based on the video and research of Dr. 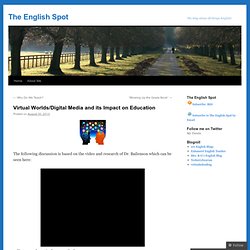 Bailenson which can be seen here: Affects on the Mind or Psychology: Center for Game Science. Can a Video Game Teach Compassion and Grit? While studying at Harvard, an academic once told Trip Hawkins to "stop wasting his time monkeying around with games. 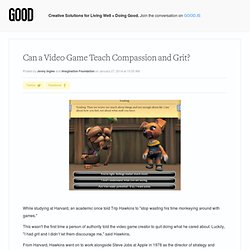 " This wasn't the first time a person of authority told the video game creator to quit doing what he cared about. Luckily, "I had grit and I didn’t let them discourage me," said Hawkins. From Harvard, Hawkins went on to work alongside Steve Jobs at Apple in 1978 as the director of strategy and marketing. After four years there, he started Electronic Arts, the company behind the insanely successful game series, Madden NFL. Because of his innovative work as the leader of Electronic Arts and the mobile game company Digital Chocolate, Hawkins is now known as one of the industry's most influential entrepreneurs—and he doesn't plan on stopping anytime soon.

Game-based blended learning & classroom response system. What’s the Difference Between Games and Gamification? Perhaps the best way to think about games in education is not to automatically call everything that looks like fun a “learning game.” 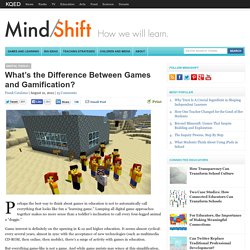 Lumping all digital game approaches together makes no more sense than a toddler’s inclination to call every four-legged animal a “doggie.” Game interest is definitely on the upswing in K-12 and higher education. It seems almost cyclical: every several years, almost in sync with the acceptance of new technologies (such as multimedia CD-ROM, then online, then mobile), there’s a surge of activity with games in education. What is eLearning Gamification? You know you have become an eLearning nerd when watching a movie all you think about is gamification and instructional design. 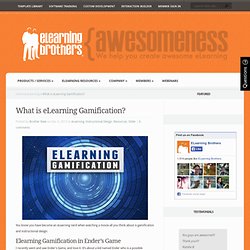 Elearning Gamification in Ender’s Game I recently went and saw Ender’s Game, and love it. It’s about a kid named Ender who is a possible candidate to save the world from an impending alien invasion. They train him for a special mission at a school in space. Scott Nicholson: Meaningful Gamification: Motivating through Play instead of Manipulating through Re. Game-Based Learning: Resource Roundup. How Virtual Games Can Help Struggling Students Learn. It seems like kids do everything online these days - and school is no exception.

More and more, educators are taking advantage of digital advances to supplement their teaching in the classroom, and are seeing encouraging results. This is especially the case for certain subgroups of students that typically struggle academically, such as English language learners and special education students. "The classroom you went to school in is almost the exact same classroom you'd walk into today, but the level of engagement our kids get outside of the classroom has changed dramatically," says Jessica Lindl, general manager of the digital gaming company GlassLab and a spokesperson for the game SimCityEDU. "Teachers are almost the entertainers trying to find whatever tool they can to try to engage their kids. " Lindl says the SimCityEDU game helps engage kids by helping them improve basic cognitive functions and critical thinking.

Made With Play: Game-Based Learning Resources. Resources by Topic: 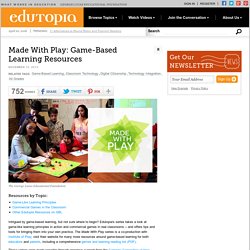 Can People Learn Empathy From Playing Video Games? Facebook Highlights 5 Growing Gaming Genres in its Ecosystem. Gaming on Facebook is continuing to evolve as the platform attracts new creators and players. 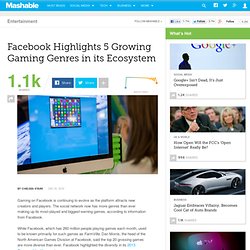 The social network now has more genres than ever making up its most-played and biggest-earning games, according to information from Facebook. While Facebook, which has 260 million people playing games each month, used to be known primarily for such games as FarmVille, Dan Morris, the head of the North American Games Division at Facebook, said the top 20 grossing games are more diverse than ever. Facebook highlighted the diversity in its 2013 Games of the Year review. "Seeing the maturation of the Facebook as a platform is really exciting," Morris said. Reframing Failure as Iteration Allows Students to Thrive. Boy: A Rube Goldberg machine is complicated for a simple task. Girl: Boss Level is a week where we work with our home base to complete a project by the end of the week. And we also don't have homework or any other of our usual classes. Teacher: You walk into a Boss Level classroom, you're not seeing really a classroom. Heroic learning, come play!

Engaging Students with Game-Based Learning. SimCity. Build the city of your dreams and watch as the choices you make shape your city and change the lives of the Sims within it. Every decision, big or small, right or wrong, has real consequences for your Sims. Invest in heavy industry and your economy will soar—but at the expense of your Sims’ health as pollution spreads. Implement green technology and improve your Sims’ lives but risk higher taxes and unemployment. In SimCity, you’re the Mayor and how you run your city is entirely up to you! For the first time, SimCity will feature Multi-city play where you can go solo, invite friends or join with neighbors to build multiple cities in your region!

SimCity for Mac is coming to Origin on August 29! Sid Meier's Civilization V: Brave New World. Game-Based Learning in Practice. In early September, my sixth grade social studies students began playing the SimCityEDU beta. Around the same time, my seventh graders began playing a non-digital debate game -- complete with teams, a point system and a leaderboard. All of my students are rewarded for their growth and accomplishments with a digital badge system. Mari Games. Student Game Showcase Website from Mari Games Launched. MARI GAMES announces the launch of their competition game center to showcase student game submissions from the Thinking Challenge. MARI GAMES, the innovative gaming competition series, is pleased to announce the launch of the MARI game center located at www.marigames.org.

All of the game submissions from the competition are fraction based and hosted in the center. The simple layout of the site enables users to move seamlessly from game to game while presenting original games to teach players of all ages about fractions. Bright, vibrant colors and graphics were incorporated to create the feel of a digital arcade. “We are excited at the launch of the MARI game center,” said Steve Koczara, Vice President of Strategic Development at Carney Labs. As the MARI GAMES series continues, the games from the first competition will continue to be available in the center as a way to inspire and challenge developers and players alike. How To Gamify Your Classroom In 6 Easy Steps. What To Know About Google Play For Education.

Yesterday at Google I/O (the company’s annual developer conference), Google released a major new education program called Google Play for Education that organizes and manages the way teachers share apps, books, and other learning content with their classes. The new store is scheduled to launch this fall and it aims to simplify content searching for schools, and to give teachers and students access to the same tools that are now native to the Google Play experience. While much of the technology news that is presented at these large companies’ conferences may seem unimportant until the products are actually released – and in many cases, completely irrelevant to classrooms – this is one of the most education-relevant announcements that has been made in recent memory. How Games Help Students Embrace Failure. Using Game Design to Further Your Education and Career. I Give Up! I’m Finally Going to Gamify My FYC Class.

And I’m kind of excited about it. Transforming Education with #Gamification: The Past, Present and Future (#GBL) Gamifying Student Engagement. In her TED talk, "Gaming Can Make a Better World," author and researcher Jane McGonigal posits that in game worlds people are "motivated to do something that matters, inspired to collaborate, to cooperate.

" Ten reasons why game based learning works in education. 6 Video Games You Can Teach With Tomorrow. Realistically, a “with it” teacher can teach almost anything using almost anything. I’ve been taught trigonometry using a paper clip, and expository structure using paint. Tech is great, but nowhere close to necessary. But if the underlying learning process is well-thought out, tech can provide powerful common ground for teachers and learners. Exploiting two computer-based RPGs. In this article I’d like to look at how we could use two computer based RPGs (Role playing games) as the basis for language development.

The two RPGs that I’m suggesting you use are both very similar and very different. How I Turned My Classroom into a ‘Living Video Game’—and Saw Achievement Soar. New Kickstarter 'World of Classcraft' Lets Students Unlock Real-World Powers. The EdGamer Channel. April 12, 2014 4:57 pm. Game Playing in the Classroom: Common Concerns. Octalysis: Complete Gamification Framework. (This is the Gamification Framework that I am most known for.

5 Brilliant 'Design Your Own Game' Websites for Students. Game Playing in the Classroom: The Value of Games in my Class. Gamestar Mechanic: Gamification Made Easy. The Gamification of Education? Should Computer Games Be Used for Classroom Instruction? How I turned my classroom into a ‘living video game’—and saw achievement soar. About PLAYMAKERSInstitute of Play. Free Tools to Incorporate Game-Based Learning. How mainstream video games are being used as teaching tools. Gaming as School Assessment? 5B become iPad game developers! › Davyhulme Primary SchoolDavyhulme Primary School. Apps to turn your class into iPad game developers! 5 Excellent Resources for Sploder Game CreatorElectronic Brains. Effects of Video Games on our Brains ? Wiki.

10 Video Games To Get Started With Game-Based Learning. Educational gaming gaining steam. Outlook - kpete46. Everything You’ll Ever Need To Know About Gamification. Mining Minecraft, Part 1: Little gamers' digital play through a teacher's eyes. Beyond Strategy and Winning, How Games Teach Kids Empathy. What teachers really think about game based learning. ClassBadges Is A Free Way To Gamify Your Classroom. The Gamification of Education Infographic #gamification #edtech.