What is stress for young teens

In this discussion, we will set into context that young teens are of age 12-14. We will discuss on what is stress and how does it affect this age group and how to overcome it. 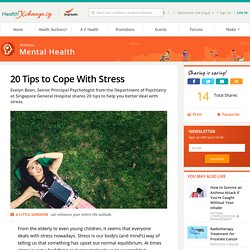 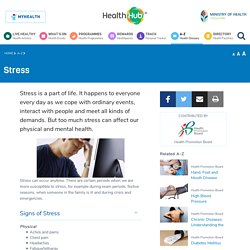 "Suspicion: "Why are they so nice to me? " Stress: Why does it happen and how can we manage it? Stress is a natural feeling of not being able to cope with specific demands and events. However, stress can become a chronic condition if a person does not take steps to manage it. The Effects of Long-term Stress on Adolescents. Let's start off by stating what is stress. 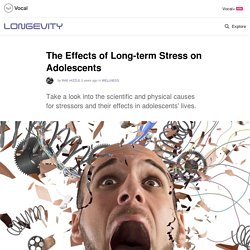 Stress is a physical, chemical, or emotional factor that causes bodily or mental tension. Stress is your body's way of responding to any kind of demand. It can be caused by both good and bad experiences. When people feel stressed by something going on around them, their bodies react by releasing chemicals into the blood. Stress is always bad? What Is Peer Pressure and Does It Lead to Addiction? Peers are people who are part of the same social group, so the term "peer pressure" means the influence that peers can have on each other. 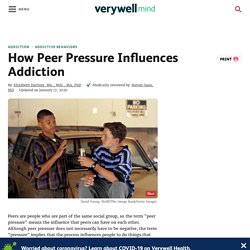 Although peer pressure does not necessarily have to be negative, the term "pressure" implies that the process influences people to do things that may be resistant to, or might not otherwise choose to do. So usually the term "peer pressure" is used when people are talking about behaviors that are not considered socially acceptable or desirable, such as experimentation with alcohol or drugs. Good Stress Vs. Bad Stress. Extreme stress. 2018 school shootings: A list of incidents that resulted in casualties. Two people were injured when a gunman opened fire at Noblesville West Middle School in Noblesville, Indiana. 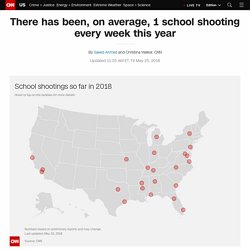 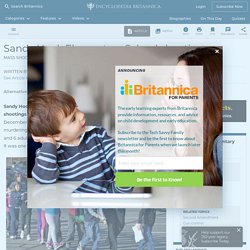 After murdering his mother at their home, Adam Lanza fatally shot 20 children and 6 adults at Sandy Hook Elementary School before taking his own life. It was one of the deadliest school shootings in U.S. history. The murder of Adam Lanza’s mother The attack began when 20-year-old Adam Lanza killed his mother, Nancy Lanza, in the home that the two shared in Newtown. She was shot four times with a .22-calibre rifle. The shootings at Sandy Hook Adam Lanza gathered the AR-15, two semiautomatic pistols, and a shotgun, as well as several hundred rounds of ammunition, and drove his mother’s car to Sandy Hook Elementary School, a public school in Newtown for kindergarten through fourth grade. 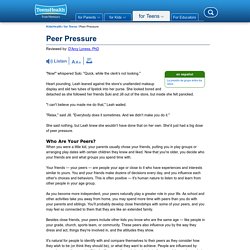 " whispered Suki. "Quick, while the clerk's not looking. " Heart pounding, Leah leaned against the store's unattended makeup display and slid two tubes of lipstick into her purse. She looked bored and detached as she followed her friends Suki and Jill out of the store, but inside she felt panicked. "I can't believe you made me do that," Leah wailed. "Relax," said Jill. She said nothing, but Leah knew she wouldn't have done that on her own. Who Are Your Peers? When you were a little kid, your parents usually chose your friends, putting you in play groups or arranging play dates with certain children they knew and liked.

Your friends — your peers — are people your age or close to it who have experiences and interests similar to yours. As you become more independent, your peers naturally play a greater role in your life. Stress (for Teens) - Nemours KidsHealth. Feeling like there are too many pressures and demands on you? 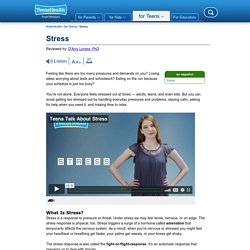 Losing sleep worrying about tests and schoolwork? Eating on the run because your schedule is just too busy? You're not alone. Psychology Today Singapore. Teens are under more stress today than ever before. 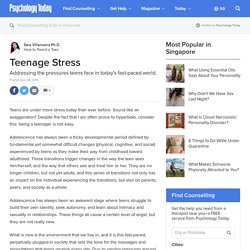 Sound like an exaggeration? Despite the fact that I am often prone to hyperbole, consider this: being a teenager is not easy. Adolescence has always been a tricky developmental period defined by fundamental yet somewhat difficult changes (physical, cognitive, and social) experienced by teens as they make their way from childhood toward adulthood. These transitions trigger changes in the way the teen sees him/herself, and the way that others see and treat him or her. What is stress. What Is Stress? Firstly, let’s debunk one myth: stress is not necessarily a ‘bad’ thing. 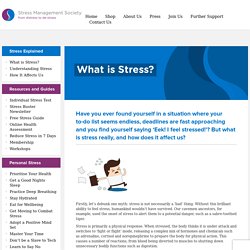 Without this brilliant ability to feel stress, humankind wouldn’t have survived. Our cavemen ancestors, for example, used the onset of stress to alert them to a potential danger, such as a sabre-toothed tiger. Stress is primarily a physical response. When stressed, the body thinks it is under attack and switches to ‘fight or flight’ mode, releasing a complex mix of hormones and chemicals such as adrenaline, cortisol and norepinephrine to prepare the body for physical action. This causes a number of reactions, from blood being diverted to muscles to shutting down unnecessary bodily functions such as digestion.

The Basics of Stress. Stress is a situation that triggers a particular biological response. When you perceive a threat or a major challenge, chemicals and hormones surge throughout your body. Stress triggers your fight-or-flight response in order to fight the stressor or run away from it. Setting the discussion age to 12-14 years old. Young Teens (12-14 years old) CDC’s Adolescent and School Mental Health Learn how connection is key to good adolescent mental health. CDC’s Parent Information (Teens 12— 19) This site has information to help you learn how to guide your teen to be safe and become a healthy and productive adult. CDC’s Healthy Weight Information. Tips for parents – Ideas to help children maintain a healthy weight. CDC’s Youth Physical Activity Guidelines This site has information on how to help children be active and play.