Your Looks and Your Inbox. This week we will confront an unfortunate truth of online dating: no matter how much time you spend polishing your profile, honing your IM banter, and perfecting your message introductions, it’s your picture that matters most. 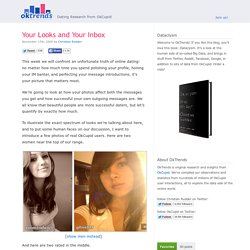 We’re going to look at how your photos affect both the messages you get and how successful your own outgoing messages are. Scientology Glossary - QR. Question(ing) and answer(ing); not going A to B, but rather wasting time, querying orders instead of blindly obeying like you are meant to. 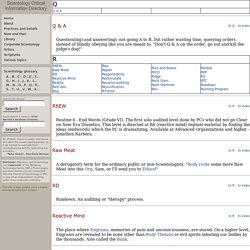 "Don't Q & A on the order; go out and kill the judge's dog! " The Scandal of Scientology. The Hell Portal Where NASA's Rocket King Divined Cosmic Rockets With L. Ron. Depending on whom you ask, I’m about to be sucked into a Hell portal that allegedly sits in caverns somewhere around NASA’s Jet Propulsion Lab. 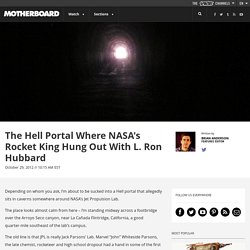 The place looks almost calm from here – I’m standing midway across a footbridge over the Arroyo Seco canyon, near La Cañada Flintridge, California, a good quarter-mile southeast of the lab’s campus. The old line is that is really Jack Parsons’ Lab. Marvel “John” Whiteside Parsons, the late chemist, rocketeer and high school dropout had a hand in some of the first rocket tests on what would later become the grounds of the , NASA’s famous rocket incubator. It was the dawn of World War II when Parsons, who’d also co-founded the missile manufacturing firm Aerojet around the same time as JPL’s inception, took to the Ordo Templi Orientis. The was a Thelema-based, fraternal-religious sex-magick order founded by Aleister Crowley, the British mystic variously known as the Great Beast 666 and the “most evil man who ever lived.” Operation Clambake present: Hubbard Audio Collection.

BTs Listen to how L.Ron Hubbard audits out a Body Thetan. 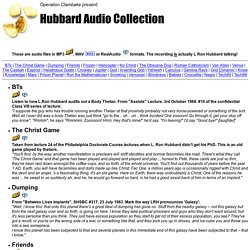 From "Assists" Lecture. 3rd October 1968. #10 of the confidential Class VIII series of lecture: "I suppose the guy who has trouble running another Thetan at that proximity probably not very horse-powered or something of the sort. Well all I ever did was a body Thetan was just think "go to the .. uh .. uh .. think Incident One zoooom! Go through it, get your stop off you know", "Rmmm", he says "Rmmmm. Zooooom! Hrrm. Xenu. Not to be confused with Xena. 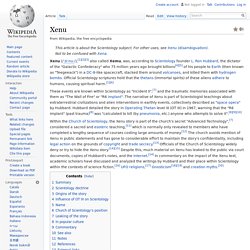 Xenu (/ˈziːnuː/),[1][2][3] also called Xemu, was, according to Scientology founder L. Ron Hubbard, the dictator of the "Galactic Confederacy" who 75 million years ago brought billions[4][5] of his people to Earth (then known as "Teegeeack") in a DC-8-like spacecraft, stacked them around volcanoes, and killed them with hydrogen bombs. Official Scientology scriptures hold that the thetans (immortal spirits) of these aliens adhere to humans, causing spiritual harm.[1][6] Summary[edit] A DC-8 aircraft in 2004. David Miscavige. Commodore's Messenger Organization. The Commodore's Messenger Organization (CMO) is a sub-unit of the Sea Org, a paramilitary[1] wing of the Church of Scientology, comprising the church's most dedicated members.[2] Its members communicate and enforce policies of the Religious Technology Center.[3][4] Formation[edit] First Commodore's Messengers were appointed by L. 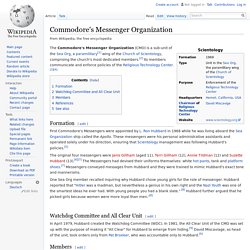 Ron Hubbard in 1968 while he was living aboard the Sea Organization ship called the Apollo. These messengers were his personal administrative assistants and operated solely under his direction, ensuring that Scientology management was following Hubbard’s policies.[5] The original four messengers were Janis Gillham (aged 11), Terri Gillham (12), Annie Tildman (12) and Suzette Hubbard (13).[6][7] The Messengers had devised their uniforms themselves: white hot pants, tank and platform shoes.[7] Messengers conveyed messages from Hubbard and they were trained to mimic Hubbard's exact tone and mannerisms.

Watchdog Committee and All Clear Unit[edit] Members[edit] Read Why Shelly Miscavige, Once Scientology’s Queen, Was Dethroned by Her Husband David. After the wife of Scientology leader David Miscavige disappeared from public view, in 2007, those who asked questions were stonewalled, or worse. 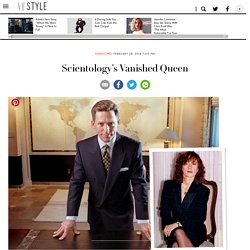 Now interviews with former insiders provide a grim picture of Shelly Miscavige’s youth, marriage, and fall from grace—and an assessment of her fate. Say what you will about L. Ron Hubbard, the notorious founder of Scientology. Despite his many flaws, or perhaps because of them, he was a true Hollywood visionary, a shady pioneer in the dark arts of packaging, branding, and synergy. In the 1950s, following a string of personal and professional failures, he spun his half-baked science-fiction fantasies into a best-selling self-help manifesto called Dianetics: The Modern Science of Mental Health.

By 1969, Hubbard had established a permanent beachhead in Hollywood. Mike Rinder. Michael "Mike" John Rinder (/ˈrɪndər/; born April 10, 1955) is an Australian former senior executive of the Church of Scientology International (CSI) and the Sea Organization based in the United States.[3] Scientology career[edit] Early years[edit] Rinder is an Australian national who joined the Sea Org on the ship Apollo at 18. 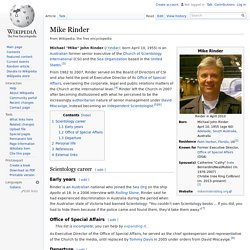 In a 2006 interview with Rolling Stone, Rinder said he had experienced discrimination in Australia during the period when the Australian state of Victoria had banned Scientology: "You couldn't own Scientology books ... If you did, you had to hide them because if the police came and found them, they'd take them away Office of Special Affairs[edit] Departure[edit] In October 2009, Rinder and Marty Rathbun revealed to the St. Scientology Glossary - F. Was an outright control mechanism, invented cut down rebel raids on invader installations. 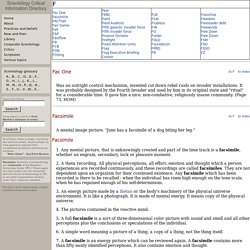 It was probably designed by the Fourth Invader and used by him in its original state and "ritual" for a considerable time.