Of Mice and Men- Websites

Dust Bowl During the Great Depression - American Memory Timeline- Classroom Presentation. Between 1930 and 1940, the southwestern Great Plains region of the United States suffered a severe drought.

Once a semi-arid grassland, the treeless plains became home to thousands of settlers when, in 1862, Congress passed the Homestead Act. 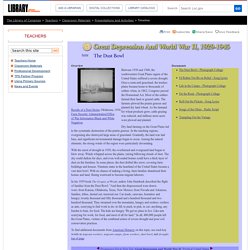 Most of the settlers farmed their land or grazed cattle. 100 Years after WWI: The Lasting Impacts of the Great War. In this photo, circa 1918, the Students’ Army Training Corps marches in formation by the Hall of Languages.

Many of the causes of the Great Depression can be traced back to World War I. In this article, Kathleen Haley interviewed David H. Bennett to find out how the war primed the world for economic chaos. – ked10340

This is one in a collection of photos from Syracuse University Archives that show WWI activity on campus. 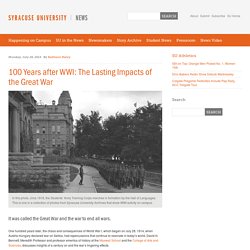 It was called the Great War and the war to end all wars. One hundred years later, the chaos and consequences of World War I, which began on July 28, 1914, when Austria-Hungary declared war on Serbia, had repercussions that continue to resonate in today’s world. The Dust Bowl - Primary Source Set. Skip navigation Library of Congress Teachers Suggestions enabled.

This Library of Congress collection features the photography of Dorothea Lange. Her work has become the face of the Great Depression. Teaching guides, student ebooks, and other primary sources are also on this site. – ked10340 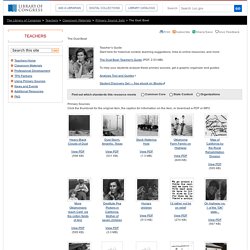 The New Deal - Primary Source Set. The Neglect of Mental Illness Exacts a Huge Toll, Human and Economic. Mental health care is one of the biggest unmet needs of our time.

This article explores the impact mental illness can have on the economy. Additionally, it should be noted that the stress of living in long-term poverty can lead to anxiety, depression, and other mental illness. – ked10340

Nearly one in two people in the U.S. will suffer from depression, anxiety disorders or another mental health ailment at some point in their life, and about one in 17 Americans currently has a serious mental illness. 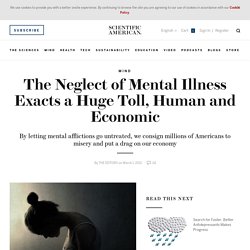 Young people are especially prone to these troubles. Yet millions of people living with these conditions do not receive the care they require. In recent years the health system and state and federal governments have taken steps to right that wrong. Progress has been slow, and budget cuts and legal wrangling have now put many of these measures at risk. Depression Era: 1930s: Repatriation for Mexican & Filipino Farm Workers. Mexican and Mexican American migrant farm workers expected conditions like those pictured above as they sought farm work in California and other states in the early 1900s.

Much of the novel takes place on a farm near the Salinas Valley in California. George and Lennie find work as farm hands. Many of the men on the ranch are migrant workers. America has a long history of dependence on migrant labor. The site below features Mexican and Filipino farm workers in California. – ked10340

At that time, the Mexican Revolution and the series of Mexican civil wars that followed pushed many Mexicans to flee to the United States. 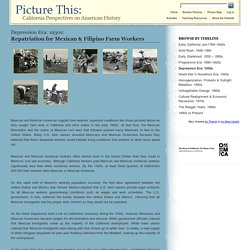 Many U.S. farm owners recruited Mexicans and Mexican Americans because they believed that these desperate workers would tolerate living conditions that workers of other races would not. The Great Depression - Facts & Summary. Among the programs and institutions of the New Deal that aided in recovery from the Great Depression were the Tennessee Valley Authority (TVA), which built dams and hydroelectric projects to control flooding and provide electric power to the impoverished Tennessee Valley region of the South, and the Works Project Administration (WPA), a permanent jobs program that employed 8.5 million people from 1935 to 1943.

The History Channel created this brief video introduction to the Great Depression that highlights the resilience of Americans. – ked10340

After showing early signs of recovery beginning in the spring of 1933, the economy continued to improve throughout the next three years, during which real GDP (adjusted for inflation) grew at an average rate of 9 percent per year. 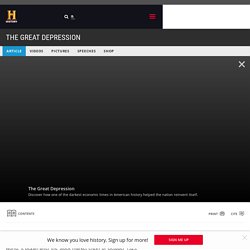 A sharp recession hit in 1937, caused in part by the Federal Reserve’s decision to increase its requirements for money in reserve. Though the economy began improving again in 1938, this second severe contraction reversed many of the gains in production and employment and prolonged the effects of the Great Depression through the end of the decade. Collection Connections - The Great Depression - Themed Resources. Teachers Historical context and ideas for integrating individual digital collections of primary sources into instruction.

The Library of Congress has the ultimate collection of primary source photos and documents from the Great Depression. This collection includes teaching resources, summaries, photographs, WPA posters, and folk music recordings. – ked10340 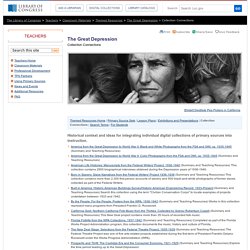 He had two older sisters, Esther and Beth, and a younger sister, Mary. 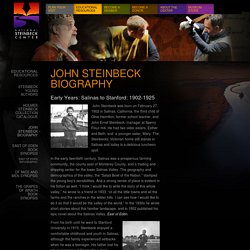 The Steinbecks’ Victorian home still stands in Salinas and today is a delicious luncheon spot. In the early twentieth century, Salinas was a prosperous farming community, the county seat of Monterey County, and a trading and shipping center for the lower Salinas Valley. The geography and demographics of the valley, the “Salad Bowl of the Nation,” stamped the young boy’s sensibilities. WGBH American Experience . Surviving the Dust Bowl . The Drought. Farms turned into dusty deserts.

The Dust Bowl was one of many factors that led to the Great Depression. Farming techniques and drought worked together to create dust storms across the country. The website below provides more details. – ked10340

The drought hit first in the eastern part of the country in 1930. 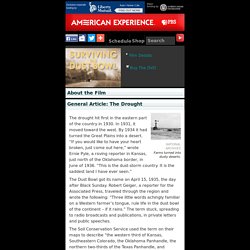 Most Americans lived in poverty during the Great Depression. That meant that they had to make many tough choices everyday. Could you last one month with only $1,000? Find out by playing the SPENT poverty simulation. – ked10340