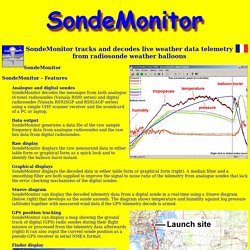 Data output SondeMonitor generates a data file of the raw sample frequency data from analogue radiosondes and the raw hex data from digital radiosondes. Raw display SondeMonitor displays the raw measurand data in either table form or graphical form as a quick look and to identify the balloon burst instant. Graphical displays SondeMonitor displays the decoded data in either table form or graphical form (right). SondeMonitor can display a map showing the ground track of digital (GPS) radio sondes during their flight mission or processed from the telemetry data afterwards (right) It can also ouput the current sonde position as a pseudo-GPS receiver in serial NMEA format.

CWOP SIGN-UP. Real time observations from your home weather station can be of great interest to the many people across the country who share your interest in the weather. 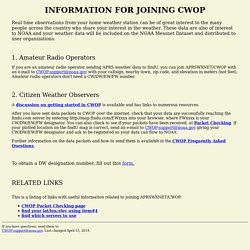 These data are also of interest to NOAA and your weather data will be included on the NOAA Mesonet Dataset and distributed to user organizations.1. Amateur Radio Operators If you are an amateur radio operator sending APRS weather data to findU, you can join APRSWXNET/CWOP with an e-mail to CWOP-support@noaa.gov with your callsign, nearby town, zip code, and elevation in meters (not feet). Amateur radio operators don't need a CW/DW/EW/FW number.2. Anemometer Fix. 25 October 17 my wind speed sensor failed after 9 years service, the symptom being that the wind speed is always at zero after checking the connection to the ISS is tight and the cable to the anemometer is not damaged. 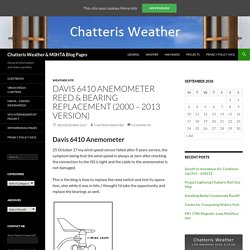 This is the blog is how to replace the reed switch and test its operation, also while it was in bits, I thought I’d take the opportunity and replace the bearings as well. Information Sources. How to Replace a Davis Anemometer Reed Switch. The Wave Glider. WX Station. Weather Station - External This Page Information:- This is where the weather data is gathered through a series of instruments, this data is collected in the Integrated Sensor Suite (ISS) before being sent to the Vantage Pro2 console using a 4 core cable connected via an RJ11 plug into the ISS. 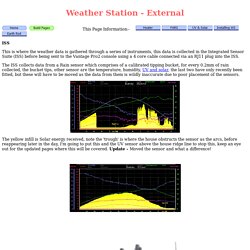 The ISS collects data from a Rain sensor which comprises of a calibrated tipping bucket, for every 0.2mm of rain collected, the bucket tips, other sensor are the temperature, humidity, UV and solar, the last two have only recently been fitted, but these will have to be moved as the data from them is wildly inaccurate due to poor placement of the sensors. DIY WX Station. Lightning & Thunderstorms - USA, Canada, United States of America. Replacement Parts - Davis WX Stations. WeeWX: open source weather software.

It's science, but it works like magic.: Davis Weatherlink Software Not Required!!!! Better start this post off with an admission. 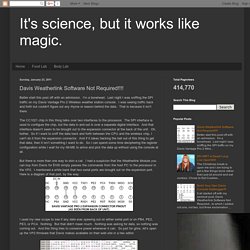 I'm a bonehead. Last night I was sniffing the SPI traffic on my Davis Vantage Pro 2 Wireless weather station console. I was seeing traffic back and forth but couldn't figure out any rhyme or reason behind the data. That is because it isn't there. The CC1021 chip in this thing talks over two interfaces to the processor. But there is more than one way to skin a cat. I used my new scope to see if any data was spewing out on either serial port or on PB4, PE2, PE3, or PC4. This, of course, is an easy problem to solve, as most people who have played with an Arduino could tell you. Next, I had to wire it up to one of the serial ports exposed on the expansion connector, but which one? So that covers the hardware. You are now in complete control of this thing. Try a few other simple commands. This is the raw data coming from the outdoor unit, and it shows up every two seconds. 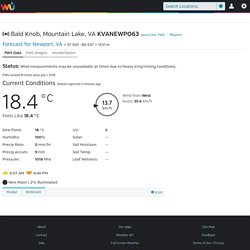 We will review the data in question. You are about to report this weather station for bad data. Please select the information that is incorrect. Forecast for Newport, VA > 37.350 -80.537 > 1331 m Status:Wind measurements may be unavailable at times due to heavy icing/riming conditions. PWS viewed 91 times since July 1, 2016 Current Conditions Station reported 2 minutes ago This station may be reporting incorrect data.Learn more This PWS is not reporting Feels Like 18.4 °C Wind from West Gusts 35.6 km/h New Moon | 2% Illuminated report this ad why ads? A global map of wind, weather, and ocean conditions. Lightning Explorer. Real-Time Lightning Map. KC4FNE - Shack. Meteorological Station. VT Mesonet. Online Weather Brief. WeatherSpark.