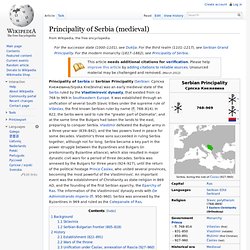 It was established through an unification of several South Slavic tribes under the supreme rule of Višeslav, the first known Serbian ruler by name (fl. 768–814). In 822, the Serbs were said to rule the "greater part of Dalmatia", and at the same time the Bulgars had taken the lands to the east, preparing to conquer Serbia. Vlastimir defeated the Bulgar army in a three-year-war (839–842), and the two powers lived in peace for some decades.

Vlastimir's three sons succeeded in ruling Serbia together, although not for long; Serbia became a key part in the power struggle between the Byzantines and Bulgars (in predominantly Byzantine alliance), which also resulted in major dynastic civil wars for a period of three decades. Ottoman Serbia. Ottoman advancements The territory of what is now the Republic of Serbia was part of the Ottoman Empire throughout the Early Modern period. 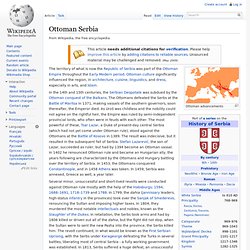 Ottoman culture significantly influenced the region, in architecture, cuisine, linguistics, and dress, especially in arts, and Islam. In the 14th and 15th centuries, the Serbian Despotate was subdued by the Ottoman conquest of the Balkans. The Ottomans defeated the Serbs at the Battle of Maritsa in 1371, making vassals of the southern governors, soon thereafter, the Emperor died. As Uroš was childless and the nobility could not agree on the rightful heir, the Empire was ruled by semi-independent provincial lords, who often were in feuds with each other.