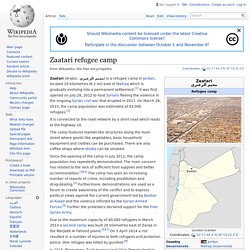 On March 26, 2015, the camp population was estimated at 83,000 refugees.[2] It is connected to the road network by a short road which leads to the highway 10. The camp features market-like structures along the main street where goods like vegetables, basic household equipment and clothes can be purchased. There are also coffee shops where shisha can be smoked. Mercy Corps Syria Adolescents Assessment No One Hears Us. Mercy Corps Syrian Adolesents Their Tomorrow Begins Today Sept 2014 (Brief) 1. Syrian Refugees Find A Home In The U.S. Refugee Children in Crisis. Most Shocking Second a Day Video. WHAT’S IN MY BAG? — Uprooted IRC. What refugees bring when they run for their lives This year, nearly 100,000 men, women and children from war-torn countries in the Middle East, North Africa and South Asia have fled their homes and traveled by rubber dinghies across the Aegean Sea to Lesbos, Greece. 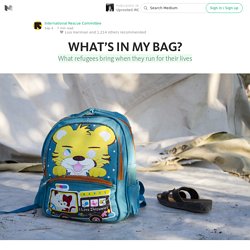 Refugees travel light, for their trek is as dangerous as it is arduous. They are detained, shot at, hungry. Smugglers routinely exploit them, promising safety for a price, only to squeeze them like sardines into tiny boats. Most have no option but to shed whatever meager belongings they may have salvaged from their journeys. Few arrive at their destinations with anything but the necessities of life. “You will feel that you are a human. Ground Zero Syria (Part 10) - Za'atari Refugee Camp. 3 Million Reasons Why Your Heart Will Break In One Video. Refugee Business Boom & The Life Jackets That Might Not Save Them. Over 1,000 babies delivered at UNFPA Zaatari camp clinic. MAFRAQ — The UNFPA on Monday celebrated the birth of baby number 1,000 at its clinic in the Zaatari Refugee Camp, which currently houses over 85,000 Syrians. 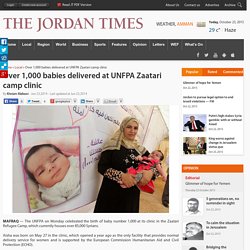 Aisha was born on May 27 in the clinic, which opened a year ago as the only facility that provides normal delivery service for women and is supported by the European Commission Humanitarian Aid and Civil Protection (ECHO). “I arrived in Jordan when I was eight months pregnant,” Nehad Zubi said, noting that she decided to leave her hometown in Daraa and come to Jordan seeking a safe delivery of her baby. “With the unrest back home there are no hospitals or clinics that provide delivery services,” the 32-year-old said, adding that there is only a field hospital in Daraa and “they only provide healthcare for the wounded”. Rabaa Abdel Mawla, a fellow refugee, said she advised Zubi to come and deliver her baby in the Zaatari camp in Mafraq, some 80km northeast of Amman. A Day in the Life: Za'atari - Episode 1: Welcome to Za'atari. A Day in the Life: Za'atari - Episode 2: Theft or privatization?

Herakut Teams Up With Refugee Kids in Jordan. The graffiti duo, Herakut just returned from North Jordan where they spent three weeks collaborating with Syrian refugee kids- painting murals in different cities and containers throughout the refugee camp Zaatari… Check out these inspiring photos, and don’t forget to visit Herakuts travel blog for more info on their world tour. 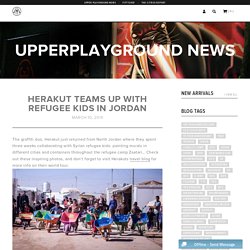 #AptART, #ACTED, #UNICEF, #ECHO Herakut Teams Up With Refugee Kids in Jordan is a post from: The Citrus Report | Art, Culture, News, Graffiti, Music, Street Art, Clothing, Politics, Reviews. After Spring - Taekwondo Trailer. ‘To be or not to be’ — Zaatari children bring their interpretation of Shakespeare to Amman. AMMAN –– Rawan Hatem has always dreamt of becoming a famous artist and has been longing to appear on TV. 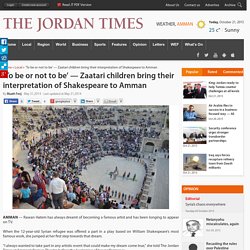 When the 12-year-old Syrian refugee was offered a part in a play based on William Shakespeare’s most famous work, she jumped at her first step towards that dream. “I always wanted to take part in any artistic event that could make my dream come true,” she told The Jordan Times at Amman’s Roman Theatre before the beginning of her performance. Hatem was one of 60 children from the Zaatari Refugee Camp who participated in an interpretation of Shakespeare’s “Hamlet” and “King Lear” that was performed in the capital on Friday. Dubbed “Shakespeare in Zaatari”, the 45-minute performance was organised by the Qatari Red Crescent (QRC) in cooperation with Suriyoon (Syrians), according to a QRC statement.

It was first held in the Zaatari camp, around 90km northeast of Amman, in April, QRC Chief of Mission Atef Dalgamouni said. 09upperplayground-citrusreport-akut-syrian_murals « The Citrus Report. Bidna Capoeira: Play. Express. Be Free. In Pictures: 'When we garden, we feel happy' In the midst of an expanse of dry land, thousands of Syrian refugees have been living in Zaatari Camp, Jordan, opened two years ago. 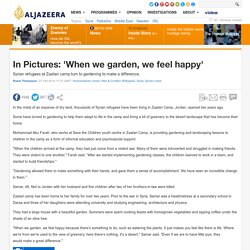 Some have turned to gardening to help them adapt to life in the camp and bring a bit of greenery to the desert landscape that has become their home. Mohammad Abu Farah, who works at Save the Children youth centre in Zaatari Camp, is providing gardening and landscaping lessons to children in the camp as a form of informal education and psychosocial support. "When the children arrived at the camp, they had just come from a violent war.

Many of them were introverted and struggled in making friends. They were violent to one another," Farah said. "Gardening allowed them to make something with their hands, and gave them a sense of accomplishment. Samar, 48, fled to Jordan with her husband and five children after two of her brothers-in-law were killed. Digital Portal Lets U.N. Visitors Step Inside Zaatari Refugee Camp. The Portals project has connected U.S. cities to Afghanistan, Iran and Honduras. 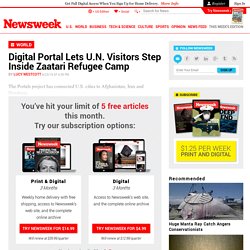 You’ve hit your limit of 5 free articles this month.Try our subscription options: Weekly home delivery with free shipping, access to Newsweek’s web site, and the complete online archive. How Can Technology Improve the Worst Refugee Crisis of Our Time? By Olimar Maisonet-Guzman, Program Coordinator Last year, the United Nations Refugee Agency reported that the number of refugees, asylum seekers, and internally displaced persons worldwide exceeded 50 million, the most since World War II. 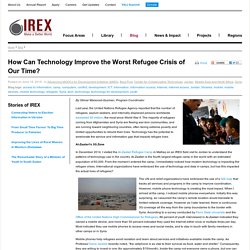 The majority of refugees coming from Afghanistan and Syria are fleeing war-torn communities, and are running toward neighboring countries, often facing extreme poverty and limited opportunities to rebuild their lives. Technology has the potential to ameliorate the service and information gap that impacts refugee lives. Logging on in Zaatari: Part I. How Syrian refugees at the Zaatari camp manage to get online The Zaatari refugee camp in Mafraq, Jordan Mike Pizzi is on a Fulbright research grant to Jordan, where he is studying Internet access and social media use in refugee communities. 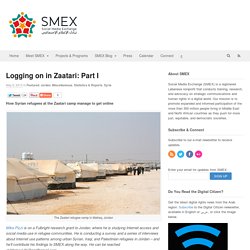 He is conducting a survey and a series of interviews about Internet use patterns among urban Syrian, Iraqi, and Palestinian refugees in Jordan – and he’ll contribute his findings to SMEX along the way. Logging on in Zaatari: Part II. What Syrian refugees in Zaatari are doing online A group of young men in Zaatari pose for a picture they requested Mike Pizzi is on a Fulbright research grant to Jordan, where he is studying Internet access and social media use in refugee communities. 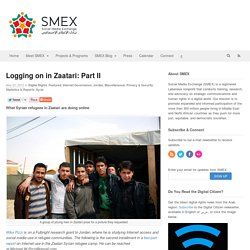 The following is the second installment in a two-part report on Internet use in the Zaatari Syrian refugee camp. He can be reached at Michael.W.Pizzi@gmail.com. In April, I returned to the falafel stands and cell phone kiosks of Zaatari’s makeshift market to ask Internet users what they were doing online. Previous studies on ICT (information and communications technology) use in this context have tended to assume that refugees will adopt new communication technologies when they facilitate more affordable or better quality communication with family around the world, and to some degree this holds true among Syrians in Jordan. Becoming A Refugee Through Your Smartphone. Vrse.works. Vrse.works presents “Clouds Over Sidra”, a virtual reality film for the United Nations in partnership with Samsung. The film was commissioned as part of the UN’s advocacy at the World Economic Forum in Davos to state and business leaders and offers a unique perspective into the lives of the world’s most vulnerable people.

“Clouds Over Sidra” follows a twelve year old in the Za’atari camp in Jordan – home to 84,000 Syrian refugees. It follows her to school, to her makeshift tent and even to the football pitch. “At the UN, we consistently strive to bring citizens’ perspectives into the decision making process anyway possible” said Gabo Arora, Senior advisor at the UN. “By leveraging breakthrough technologies, such as virtual reality, we can create solidarity with those who are normally excluded and overlooked, amplifying their voices and explaining their situations.”

“Getting a sense of ‘presence’ from Virtual Reality is an incredibly powerful experience. Jordan: Malala Visits Za'atari Refugee Camp. Syrian teenagers work with top iPhone photographer to produce their own portrait of life in a refugee camp. Save the Children has launched a unique online gallery of images captured by Syrian refugee teenagers on mobile phones. The BBC launch is online now, under the following slideshow: The iPhone photography project – facilitated by Michael Christopher Brown, a member of world-class Magnum Photos and renowned for his work using iPhones - paints a new and unique portrait of life in Za’atari refugee camp, Jordan. The teenagers, working alongside Save the Children, have created a dedicated Tumblr feed for the project, which will continue to be updated over the next year to give a snapshot of life in the camp. Brown spent a week at Za’atari in August, running workshops to teach the children - both girls and boys aged 14 to 18 – how to capture and process images on an iPhone.

The teenagers selected had already been working with Save the Children, using photography to regain confidence, self-esteem and hope by allowing them to share their stories. Capoeira Under Conflict. Please note: the following page reflects a past CoR Network campaign and may be out of date. Tracing its roots to the plantations of sixteenth-century Brazil, where slaves combined martial arts, song, and dance to create a new artform in defiance of their masters, capoeira has always served as an expression of resistance.

We at the Cultures of Resistance Network have long been inspired by this artform, which has gained international popularity since the 1970s and continues to carry the spirit of creative resistance in its many incarnations around the globe. This spirit has largely been carried by capoeira mestres (masters) who pass down their own interpretations of capoeira philosophy and practice to generations of students through capoeira academies, where students eventually become mestres themselves. In this way, capoeira revolves around a kind of mentorship that deepens the physical and political education it provides. Connecting Classrooms: British school teachers visit Zaatari refugee camp in Jordan.

Photos by Peter Biro/IRC. Working with Young People who are Refugees. Syrian war: the boy who dreams of rebuilding Aleppo. Jordan: Syrian refugee teacher opens camp school. Street art. Educator in FLS. Sugata Mitra: Build a School in the Cloud. Melissa Fleming: How to help refugees rebuild their world. TeacherTuesday - Bangladesh: Learning on water with solar powered technology. The theme for #TeacherTuesday this week of technology and access to learning is dear to my heart and my work from the past 20 years. Also, having lived in Bangladesh for four years, 2003-2007, I have great empathy with the teacher this week as I have seen and interacted with and lived with the wonderful people of Bangladesh who have a resilience, an amazing intellect and joy for life.