Wool and the Gang Pom Pom Key Ring. Lady and Pom poms. Pinterest. Lula Louise: Mini DIY Tutorial – Tassel Jewelry 3 Ways. When you get started on something, do you ever find that you just can't stop doing more and more? 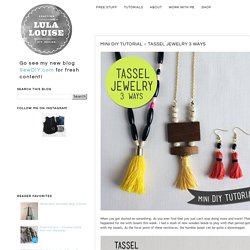 That's what happened for me with tassels this week. I had a stash of new wooden beads to play with that paired quite well with my tassels. As the focal point of these necklaces, the humble tassel can be quite a showstopper. For the first tassel necklace, I used a variety of oval shaped wooden beads in black, cream and hot pink. This is a long necklace that extends to the waist. Lula Louise: Mini DIY Tutorial – Tassel Jewelry 3 Ways. Lula Louise: DIY Tutorial – How to Make a Tassel. When you think of tassels you probably think of winter ski caps or heavy window coverings. 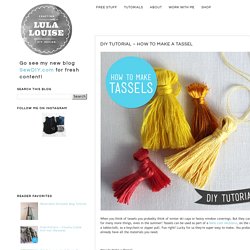 But they can be used for many more things, even in the summer! Tassels can be used as part of a boho cool necklace, on the corners of a tablecloth, as a keychain or zipper pull. Fun right? Lucky for us they're super easy to make. You probably already have all the materials you need. Lula Louise: DIY Tutorial – How to Make a Tassel. How to make animal pom-poms - Mr Printables Blog. After making those flower pompoms, I couldn’t help making more. Maybe it’s called procrastination. I have hundreds of other things on my to-do list, but then this week I thought, well, hey let’s just make more pompoms! Among many other ideas, I went for having a go at animal pompoms. It’s just that kids love animals most and that’s what matters here on Mr P! They are a little more difficult to make if you’ve never tried making pompoms, so in that case, start with the flower pompoms here then you’ll be able to easily move on to more complex designs.

Basically the method is the same. Start with the nose and mouth in the middle, wrap around the surrounding face color on top of this, a little wrapping floating in the middle for the eyes then finishing with more face color. Making Flower Pom-poms with a DIY Pom-pom maker - Mr Printables Blog. I’ve always loved those fancy Japanese pompoms on Pinterest, the ones that have flower or polka dot patterns on them – they would make lovely handmade gifts for kids! 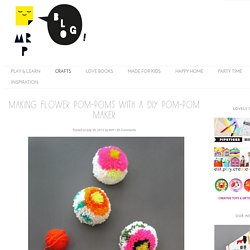 The links always seem to end up at Japanese sites that look like stores and I couldn’t find a tutorial anywhere. I decided to give it a go because once I’d figured out how it works, I’d be able to make pompom flowers, animals, planets … anything out of pompoms! How to Make Pom Poms Five Times Faster Than Everyone Else. Sick of the cardboard circle method? 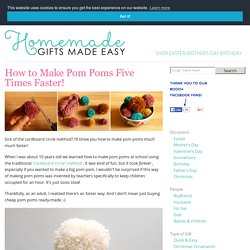 DIY Pompom Maker for Kids! - Glamour4You. Pom pom keychain. DIY Shaggy Dog Is The Easiest Pet Ever. Not a week goes by without my 8-year-old daughter bringing up the “can I PLEASE have a dog” conversation. 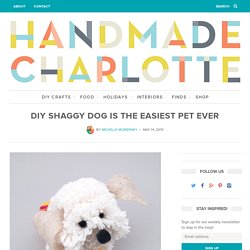 She would be a wonderful dog-mother and would absolutely love to have a little guy to love on and take care of, but sadly our work/life balance just won’t allow for it right now. In the meantime, we’ll just have to make our own four-legged friend! MollyMooCrafts Cute Pom Pom Craft - How to make a pom pom bee. MollyMooCrafts Introducing Weaving To Kids. Crafts for kids and their parents Pom Poms - school bag charms & keyrings. Pom Poms – Backpack Charms Little Miss is ‘back to school’ in the morning, the final part of the prep was getting her hair cut today so we’re officially ready….. that is until I get home and can’t find her tie or something, always happens!! 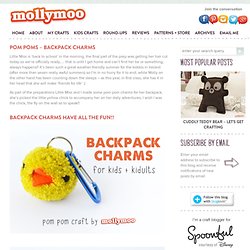 It’s been such a great weather-friendly summer for the kiddos in Ireland (after more than seven really awful summers) so I’m in no hurry for it to end, while Molly on the other hand has been counting down the sleeps – as this year, in first class, she has it in her head that she will make ‘friends for life’ :) As part of the preparations Little Miss and I made some pom pom charms for her backpack, she’s picked the little yellow chick to accompany her on her daily adventures, I wish I was the chick, the fly on the wall so to speak!! - Backpack Charms have all the fun!! Materials Needed: pom pom maker (the bought kind or the traditional cardboard discs), wool, scissors, felt, felt glue- How to make pom poms, by Molly :) Next glue on the eyes. Pom pom and pipe cleaner dolls. This week I made the girls some little pom pom and pipe cleaner dolls. 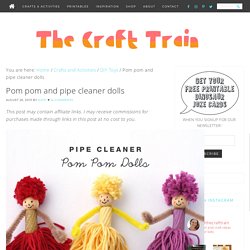 They were a hit! You could turn them into fairies with the addition of a pair of paper or felt wings glued to the back but I thought they were cute enough as plain dolls and left them as is. The girls quickly named them Fireball, Sunshine and Lily, can you guess which is which? * Disclosure: I was provided with a gift card to use at Spotlight in exchange for writing this post but all thoughts, opinions and ideas are my own. Yarn crafts for kids. Follow these tips and you’ll be able to do amazing toys from the usual yarn! 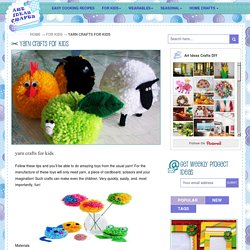 For the manufacture of these toys will only need yarn, a piece of cardboard, scissors and your imagination! Such crafts can make even the children. Very quickly, easily, and, most importantly, fun! Materials For the pom poms: Scissors Two plastic covers (eg, yogurt) or a cardboard cut out 2 circles with holes in the center any color yarn Flower: The dense fabric of length 7 inch (stalk) A thin wire Flowers, chick, cat and a frog made of pom poms Instructions.