- StumbleUpon. - StumbleUpon. 16 Most Magical Places To Visit on Earth. The earth is amazing and in it are some of the coolest and most magical locations and landmarks imaginable. 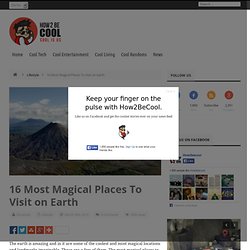 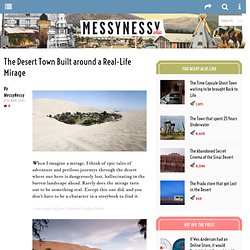 Rarely does the mirage turn out to be something real. Except this one did, and you don’t have to be a character in a storybook to find it. Lead image (c) Juan Fernando Escobar Ochoa (c) Kamil Kaba (c) Matias Recondo.

These 22 Far Away Perspectives Of Famous Places Will Change The Way You See Them Forever. Many of us only know the world’s most famous landmarks through images that show them in all their beautiful, historical glory. 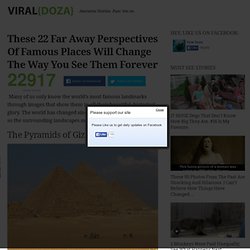 The world has changed since these structures were built, so the surrounding landscapes might not be what you’d expect. The Pyramids of Giza The Acropolis The Arc de Triomphe Source: 500px.com. TIMELAPSE MEDIA: filmy reklamowe, promocyjne, korporacyjne w technice timelapse. - StumbleUpon. 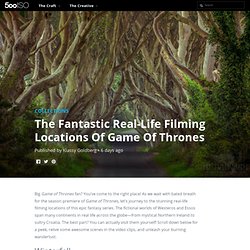 You’ve come to the right place! As we wait with bated breath for the season premiere of Game of Thrones, let’s journey to the stunning real-life filming locations of this epic fantasy series. The fictional worlds of Westeros and Essos span many continents in real life across the globe—from mystical Northern Ireland to sultry Croatia. The best part? You can actually visit them yourself! Winterfell Doune Castle in Scotland Castle Ward in Northern Ireland Tollymore Forest in Northern Ireland Where the Starks first meet the direwolves as puppies. Audley’s Castle and Woods in Northern Ireland.

Earth album alpha - a slicker google maps + flickr mash-up. Cities. Cartagena, Colombia: make Hay where the sun shines. Cartagena would be, in other words, a beautiful place to walk around even if you had nowhere to go. 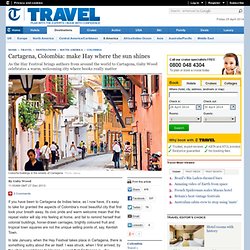 But ever since the Hay Festival set up an outpost there in 2006, inaugurated with a historic appearance by Gabriel García Márquez, local author and guiding spirit, world-class literary events have been staged there every year. Indeed, the events themselves are exceptional in tone: it’s hard to describe the peculiar combination of glamour and democracy that Cartagena engenders, but it seems to transform its visiting speakers. By the time they have had breakfast together in an open courtyard in the Hotel Sofitel Santa Clara – where members of the public mill about holding several books at a time – it’s a certainty that, when their turn comes to speak to hundreds if not thousands of strangers, they pull off something convivial and electric: relaxed, yet dazzling all the same. I have heard Philip Glass play to rapt audiences in the baroque and gilded Teatro Adolfo Mejia. 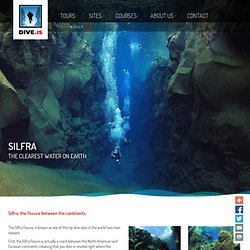 21 Roads to Drive Before you Die. There’s nothing like a road trip to really experience a country. 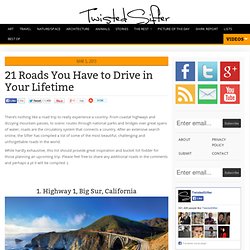 From coastal highways and dizzying mountain passes, to scenic routes through national parks and bridges over great spans of water; roads are the circulatory system that connects a country. After an extensive search online, the Sifter has compiled a list of some of the most beautiful, challenging and unforgettable roads in the world. While hardly exhaustive, this list should provide great inspiration and bucket list fodder for those planning an upcoming trip. Please feel free to share any additional roads in the comments and perhaps a pt II will be compiled :) 1. Travel theme: Still. When I think of this theme I remember my visit to Prince Edward Island, Canada. 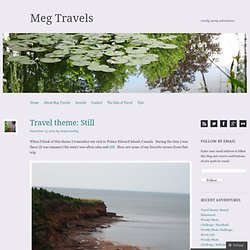 During the time I was there (it was summer) the water was often calm and still. Here are some of my favorite scenes from that trip. Calm at sunset. Szkocja. Suffolk in winter. Along its shores, at Southwold, Aldeburgh, Orford and Woodbridge, you are never far from a good meal and an open fire. 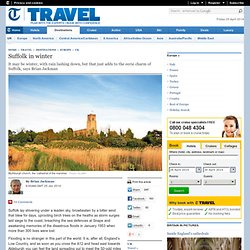 In short, it’s the perfect destination for a midwinter break. And that is exactly what I enjoyed – in spite of arriving in the midst of one of the wettest winters on record. It says a lot for this unique corner of rural England that even on the rainiest days I found so much to see and do. At Minsmere, the RSPB’s flagship reserve, I sat in a hide and watched marsh harriers revelling in the wind, drifting and sideslipping over acres of reeds. Farther off stood a herd of konik ponies, chunky little beasts brought in from Poland to graze the marshes. A bearded tit. Evan Travels. - StumbleUpon. Male is the capital and most populous city in the Republic of Maldives. It is geographically located at the southern edge of North Malé Atoll (Kaafu Atoll).

Administratively, it is a city-class constituency and is governed by the Malé City Council. Traditionally it was the King’s Island, from where the ancient Maldive Royal dynasties ruled and where the palace was located. Crystal River - The most beautiful river on earth. Cano Cristales - Crystal River. 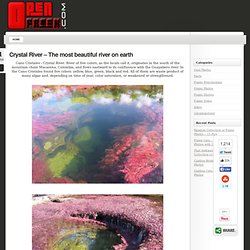 River of five colors, as the locals call it, originates in the south of the mountain chain Macarena, Colombia, and flows eastward to its confluence with the Guayabero river. In the Cano Cristales found five colors: yellow, blue, green, black and red. All of them are waste product of many algae and, depending on time of year, color saturation, or weakened or strengthened. Share on Tumblr. - StumbleUpon. The World's Six Most Beautiful Lakes. World’s Beautiful Lakes: Five-Flower Lake, China The pristine water of Wuhua Hai, or Five-Flower Lake, is the pride of Jiuzhaigon National Park in China. The shallow lake glistens different shades of turquoise and its floor is littered with fallen ancient tree trunks. Wuhua Hai is one in the legendary 108 haizi, or multicolored lakes, in the national park that according to legend, were created after an ancient Goddess dropped a mirror that her lover had given her, smashing it into 108 pieces.

The amazing colors make it one of the world’s most beautiful lakes: Plitvice Lakes, Croatia In any given day, the Plitvice Lakes in Croatia can emit hues ranging from green and grey to blue and azure. Hanging Lake - JS Nature Photos. Mystical, Magical & Magnificent Monasteries in Meteora (20 Pics) The caves in Meteora, Greece, had inhabitants for fifty millennia, but due to raids, “hermit monks” moved to the safety of sandstone rock pinnacles in the 9th century and began building monasteries.

More monks and nuns came, building more monasteries perched high upon the cliffs. Wikipedia reports, “Access to the monasteries was originally (and deliberately) difficult, requiring either long ladders lashed together or large nets used to haul up both goods and people. - StumbleUpon. - StumbleUpon. 50 places you can't reach without climbing [pics] A celebration of the high places of the world, in photographs. A FEW YEARS AGO, I was in southwestern Bolivia and had the opportunity to climb the 19,400ft Licancabur (as seen in photo #5 below). Acclimated as I was by having lived at 8500ft for the previous three months and sleeping at 14,000ft the night before, it was the most challenging hike of my life.

After passing the halfway point — when our guide informed us that if we didn’t have a headache yet, we were probably good to go — it was baby step…baby step…rest…repeat. Too beautiful to be real? 16 surreal landscapes found on Earth. These bizarre locations may seem like a series of elaborate movie sets, but they are real destinations that you might want to see for yourself. Photo: Greg Mote/Flickr The Wave, Arizona, U.S. Photo: Shutterstock Travertines, Pamukkale, Turkey Photo: Shutterstock Photo: Shutterstock. 27 Breathtaking places to visit in your lifetime... Top 25 Incredibly Colorful Places of the World. 10 Most Unbelievable Places in the World. There are ten most unbelievable places in the world that you definitely must visit before you die. 1.

Up in the Air (10 Photos) © George Steinmetz. 22 Amazing Places that are Hard to Believe Actually Exist. “With all the beauty that our Earth has to offer, it’s a real pity that not all of us have enough time or possibilities to go and see it. Inside 'the world's most romantic garden' Nerdy Day Trips. Add Your Day Trip Once you're happy with your pin position, you can save it to the map for everyone to see. Channel in time. The castle of Mont Orgueil. Why I shun the Champs Elysees. 12 October 2013Last updated at 21:20 ET By Hugh Schofield BBC News, Paris.