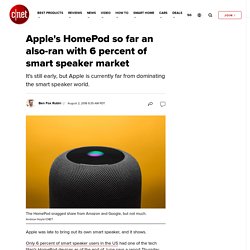 Only 6 percent of smart speaker users in the US had one of the tech titan's HomePod devices as of the end of June says a report Thursday from market researcher Consumer Intelligence Research Partners. In comparison, Amazon stayed No. 1, with 70 percent, and Google remained second, with 24 percent. The number of devices in use in the states hit 50 million. Top 10 Countries Leading the Artificial Intelligence Race. The current ravishing trends of Artificial Intelligence is hailing all the industries across different countries. 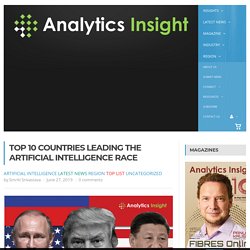 AI has the power to recognise faces, run autonomous cars, deliver better online outcomes and strengthen business in various industries. Not too much of surprise, the developed, developing and under-developed countries all are focusing on AI adoption for better futuristic opportunities and development. While AI technology is flourishing within and beyond the circumference of the world, some major AI powers are working hard on winning the race. Here is a list of top 10 countries leading the AI rush all across the globe. China China has always held ambitions significantly high for becoming AI Superpower of the world. Moreover, the country has published a number of research papers on deep learning which is comparatively more than other leading countries. United States of America The United States of America is giving a tough competition to China in terms of becoming AI superpower.

AI Index 2018 Annual Report. Artificial Intelligence: Definition, Types, Examples, Technologies. AI shouldn’t stop at reaching the human level it must go beyond the capabilities of humans for it to reach its peak potential. 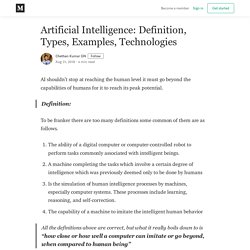 Definition: To be franker there are too many definitions some common of them are as follows. The ability of a digital computer or computer-controlled robot to perform tasks commonly associated with intelligent beings.A machine completing the tasks which involve a certain degree of intelligence which was previously deemed only to be done by humansIs the simulation of human intelligence processes by machines, especially computer systems. These processes include learning, reasoning, and self-correction.The capability of a machine to imitate the intelligent human behavior. How AI is helping fashion designers forecast trends. Accenture. What the post-digital era will look like Today, digital technology is a strategic priority for every business. 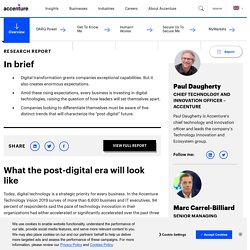 In the Accenture Technology Vision 2019 survey of more than 6,600 business and IT executives, 94 percent of respondents said the pace of technology innovation in their organizations had either accelerated or significantly accelerated over the past three years. Given their collective prioritization of digital technology, every company will eventually converge on the same turning point—one where digital-era technology, which began as a differentiating advantage, is something expected from every business. In other words: The digital playing field will eventually even out.

So, what will this new, “post-digital” world look like? Companies already face a new level of expectations from consumers, employees and business partners. Baidu Research. Artificial Intelligence – What it is and why it matters. The term artificial intelligence was coined in 1956, but AI has become more popular today thanks to increased data volumes, advanced algorithms, and improvements in computing power and storage. 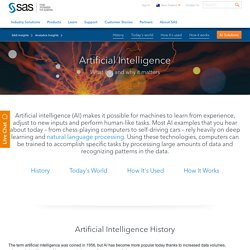 Early AI research in the 1950s explored topics like problem solving and symbolic methods. In the 1960s, the US Department of Defense took interest in this type of work and began training computers to mimic basic human reasoning. For example, the Defense Advanced Research Projects Agency (DARPA) completed street mapping projects in the 1970s. What is AI? What does artificial intelligence do? - CBBC Newsround. Getty Images Artificial intelligence - or AI for short - is technology that enables a computer to think or act in a more 'human' way. 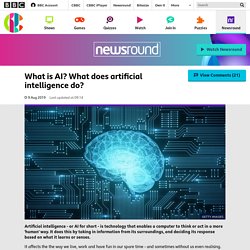 It does this by taking in information from its surroundings, and deciding its response based on what it learns or senses. It affects the the way we live, work and have fun in our spare time - and sometimes without us even realising. AI is becoming a bigger part of our lives, as the technology behind it becomes more and more advanced. Machines are improving their ability to 'learn' from mistakes and change how they approach a task the next time they try it.

Some researchers are even trying to teach robots about feelings and emotions. Smart Home Devices & Home Automation Systems. An error occurred while cancelling your delivery. 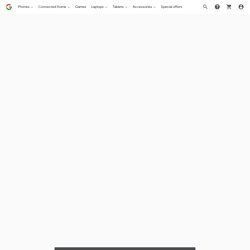 Please try again later. An error occurred while processing your purchase. Please try again later. John Paul - Concierge services, client acquisition and loyalty programs. Leading Emotional Intelligence and Voice Analysis. The Washington Post's robot reporter has published 850 articles in the past year. It’s been a year since The Washington Post started using its homegrown artificial intelligence technology, Heliograf, to spit out around 300 short reports and alerts on the Rio Olympics. 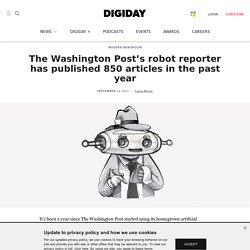 Since then, it’s used Heliograf to cover congressional and gubernatorial races on Election Day and D.C. -area high school football games, producing stories like this one and tweets like this: The Associated Press has used robots to automate earnings coverage, while USA Today has used video software to create short videos. Amazon Devices Event – September 2019. Amazon’s new $200 Echo Look camera will judge your outfits. Amazon today announced a new device for the Echo family: the Echo Look, a “style assistant” camera that helps catalog your outfits and rates your look based on “machine learning algorithms with advice from fashion specialists.” 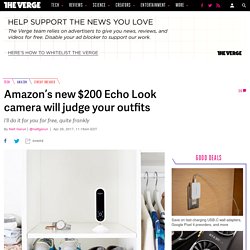 Imagine it as a smart mirror of sorts — you can talk to the Echo Look to take full-length photos or short videos to check out your outfit from seldom-seen angles. The Echo Look first leaked as a “security camera” back in March, and the photo matches exactly with what Amazon has announced today.