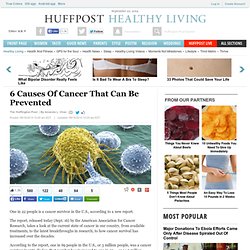 The report, released today (Sept. 16) by the American Association for Cancer Research, takes a look at the current state of cancer in our country, from available treatments, to the latest breakthroughs in research, to how cancer survival has increased over the decades. According to the report, one in 69 people in the U.S., or 3 million people, was a cancer survivor in 1971. Today, that number has increased to one in 22 -- or 14.5 million cancer survivors. The five-year survival rate has also increased over the last 30 or so years, with 49 percent of cancer patients surviving for five years between 1975 and 1977. That number increased to 68 percent in 2003 to 2009. The report also detailed how certain lifestyle choices contribute to, or even cause, cancer. For more on known preventable causes of cancer, check out AACR's graphic below: 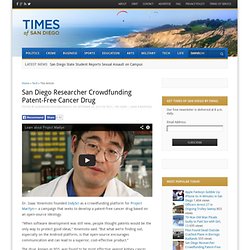 Isaac Yonemoto founded IndySci as a crowdfunding platform for Project Marilyn— a campaign that seeks to develop a patent-free cancer drug based on an open-source ideology. “When software development was still new, people thought patents would be the only way to protect good ideas,” Yonemoto said. “But what we’re finding out, especially on the Android platform, is that open-source encourages communication and can lead to a superior, cost-effective product.” The drug, known as 9DS, was found to be most effective against kidney cancer, melanoma, and triple negative breast cancer in an NCI-60 study, which pits potential cancer drugs against 60 different kinds of cancer cells.

The American Cancer Society notes that while melanoma constitutes just 2 percent of skin cancer cases, it causes a majority of skin cancer deaths. The goal of the crowdfunding campaign is to finance an initial xenograft study— that is, studying the drug in mice. Indysci.org. What is Project Marilyn? 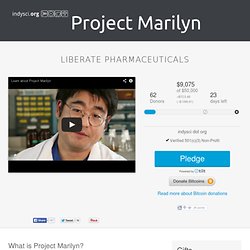 Project Marilyn is a campaign to develop a patent-free anticancer drug. The campaign will fund a xenograft experiment, which is the next step in developing the promising anti-cancer compound "9DS". This experiment needs to be completed before 9DS can move on to clinical trials. Because all funds(see faq) will go towards preclinical anticancer drug lab work, this is your best opportunity to directly contribute to anticancer research.

Why make drugs without patents? When Salk and Sabin cured polio, they didn't patent the vaccine. it's time to develop a patent-free anticancer drug for the 21st century. Like the pharmaceutical industry today, the software industry was historically dominated by big companies and proprietary code bases. "Open source drug discovery and genetic engineering. The Plan The drug candidate 9DS was developed at the University of Maryland. The official scientific prospectus approved by the indysci board is available for examination. Budget Early Donors.