Born a crime trevor noah. Listen to Born a Crime Audiobook Streaming Online Free. [Total: 94 Average: 3.5/5] Stories from a South African Childhood Trevor Noah the writer and narrator of “born a crime” has described everything in the book related to his life and his career in the comedy world. 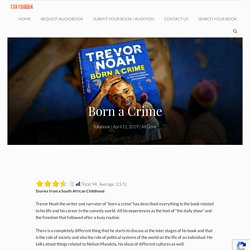 All his experiences as the host of “the daily show” and the freedom that followed after a busy routine. There is a completely different thing that he starts to discuss at the later stages of his book and that is the role of society and also the role of political systems of the world on the life of an individual. He talks about things related to Nelson Mandela, his ideas of different cultures as well. All humans are the same according to him but some think that they are superior to the rest because of their culture, language, and identity but that is completely absurd according to Noah because it is against the dignity of the human race.

He brings all his past memories to life in this book and tells them quite clearly without any shyness. Server backup Paused...

Trevor Chats with His Grandma About Apartheid and Tours Her Home, “MTV Cribs”-Style. The Dangers of a Single Story. Trevor Noah: Born a Crime - Oprah’s SuperSoul Conversations. In his interview with Oprah at the famed Apollo Theater in New York City, Trevor Noah, the late-night comedy host and best-selling author of "Born a Crime," discusses his childhood in South Africa, his mother who risked her life to raise him, and his unlikely path to becoming the host of "The Daily Show. 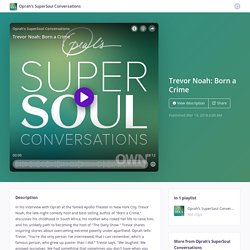 " Trevor shares inspiring stories about overcoming extreme poverty under apartheid. Oprah tells Trevor, "You're the only person I've interviewed, that I can remember, who's a famous person, who grew up poorer than I did. " Trevor says, "We laughed. We enjoyed ourselves. We had something that sometimes you don't have when you have too much, and that's the ability to focus on the human beings around you. " Prh born a crime teachers guide. Prh born a crime reading guide.

9780525582168 7148. Growing Up in South Africa - Between the Scenes. Trevor Noah, "Born a Crime" (with Cory Booker) Trevor Noah's Lesson To Young Readers: It's Freeing To Define Yourself On Your Own Terms. Trevor Noah thinks we should all be young readers. 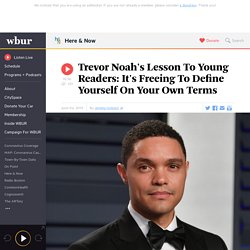 The comedian and "Daily Show" host's new book "It's Trevor Noah: Born a Crime: Stories from a South African Childhood" — a young adult adaptation of his 2016 autobiography — isn't watered down for younger bookworms. Get the editor's can't miss stories of the week, and tips for navigating life – and weekends – during the coronavirus outbreak. Sign up now. Noah says besides tweaking some of the language and simplifying some of the stories told in the original, his memoir for young adults is largely the same.

"All I changed in the book was just how I described certain concepts, but I didn't try to talk down to younger readers because I didn't like being talked down to when I was young," he tells Here & Now's Jeremy Hobson. Growing Up in South Africa - Between the Scenes. Trevor Noah interview for Guardian Live – full video. 19.01.09: Personal Essays and Storytelling: Trevor Noah, Nelson Mandela, and Nadine Gordimer. Discussion Guide for "Born a Crime" by Trevor Noah. The CRC Office of Race Relations wants to support congregations and communities as they seek to live into God's call to find unity in their diversity. 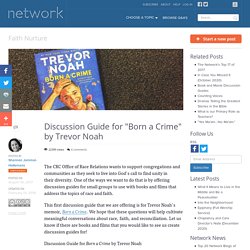 One of the ways we want to do that is by offering discussion guides for small groups to use with books and films that address the topics of race and faith. This first discussion guide that we are offering is for Trevor Noah's memoir, Born a Crime. We hope that these questions will help cultivate meaningful conversations about race, faith, and reconciliation. Let us know if there are books and films that you would like to see us create discussion guides for! Discussion Guide for Born a Crime by Trevor Noah 1. 2. 3. 4. 5. 6. 7. 8. This Semester's Book: Born a Crime - 2020 Fall Campus Book Discussion: Born a Crime - FCC Research Guides at Frederick Community College. Born a Crime final. Resources for Working with “Born a Crime” Anti-Racist Resource Guide. FYF Born a Crime Guide. Witness to Apartheid: A Teaching Guide - Zinn Education Project. This Witness to Apartheid teaching guide was developed for the 1986 Academy Award nominated documentary film of the same name, directed by Sharon I. 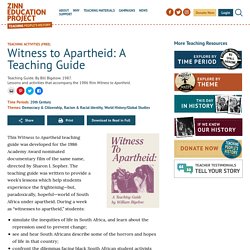 Sopher. The teaching guide was written to provide a week’s lessons which help students experience the frightening—but, paradoxically, hopeful—world of South Africa under apartheid. During a week as “witnesses to apartheid,” students: simulate the inequities of life in South Africa, and learn about the repression used to prevent change;see and hear South Africans describe some of the horrors and hopes of life in that country;confront the dilemmas facing black South African student activists through role play; andcommunicate directly to their peers in South Africa.