A whopping 92% of working Singaporeans are stressed – and women are prioritising families over themselves, study finds 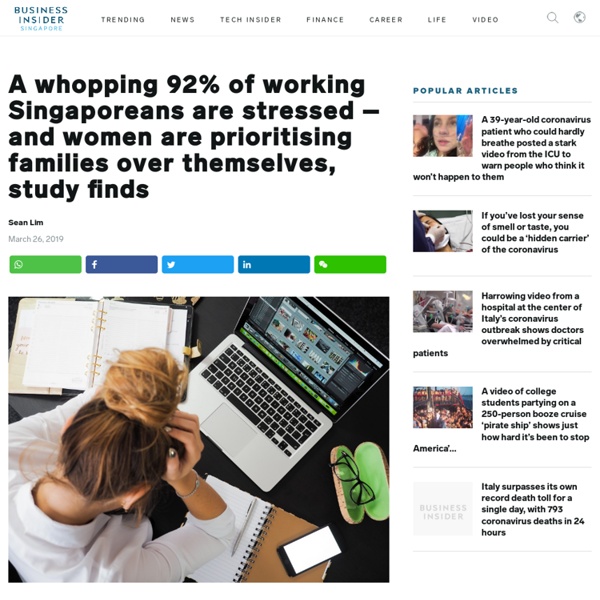 Pexels If you’re feeling stressed at work, you’re not alone. A vast majority of working Singaporeans are under stress, and women in particular feel that it’s less manageable, a survey has found. In the 2019 Cigna 360 Well-Being Survey, a whopping 92 per cent of working Singaporeans report feeling stressed, higher than the global average of 84 per cent. Of this, 13 per cent say their stress is unmanageable, which is on par with the global average, according to the study which surveyed a total of 13,200 online interviews in 23 markets, including 502 residents in Singapore. And stress doesn’t go undetected in the workplace. Read also: 6 in 10 Singaporeans admit that they don’t leave work on time just to ‘show face’ Noticing colleagues’ stress in turn makes respondents more self-aware, it seems. 30 per cent of respondents feel more conscious about managing their own stress upon seeing others stressed at work. Women prioritise families over themselves Lack of support at work Unprepared for old age

Related:  Stress and Working Adults • PSY108 - Stress • Stress: What are they & how are we affected by it? • fakhrusydestiny • Let's Chase the Stress Away!

60% of Singaporean staff experience above average stress levels Are Singaporean employers doing enough when it comes to health and well-being programmes? It seems not. According to new research from Willis Towers Watson, local employers are still missing the mark, with many employees feeling that their needs are not being met. When it comes to work-related health issues, Willis Towers Watson’s earlier 2017 Benefits Trends Survey found that almost half (44%) of local employers identified stress as the number one health issue. In the same vein, 60% of employees admitted to having above average or high levels of stress. Despite this, the survey revealed only 27% of employers are actually taking action to reduce work-related stress.

Singapore spends $3.1 billion on stress-related illnesses annually: Study, Health News SINGAPORE - A study has found that Singapore spends about US$2.3 billion (S$3.1 billion), or 18 per cent, of its total healthcare expenditure on stress-related illnesses annually. This put the nation's proportion of expenditure on stress-related illnesses second-highest out of the nine regions studied in the report, coming just 0.8 per cent behind Australia's 18.8 per cent. The other seven regions were Hong Kong, South Korea, Taiwan, Thailand, United Arab Emirates, the United Kingdom and the United States. The report, which was produced by healthcare consultancy firm Asia Care Group on behalf of health insurance and services company Cigna, was published on Thursday (Nov 21). Globally, 84 per cent of people surveyed in past studies admitted to feeling stressed, said Cigna's regional chief executive officer Julian Mengual, while 64 per cent reported that they operated in an "always on" environment.

160,000 Singaporeans hospitalised from stress every year, with over 14 million stress-related doctor visits: report, Business Insider - Business Insider Singapore One in every three GP visits here is linked to stress-related conditions, a healthcare report has found. Pixabay Feeling stressed right now? You’re not alone – Singapore forks out billions of dollars a year to treat stress-related medical problems, a new global report on stress in eight countries has found. The report, published in November by health insurance firm Cigna, looked at the costs of treating stress in Singapore, the US, UK, Australia, Taiwan, Thailand, Hong Kong, the UAE, and South Korea.

Rates of Employee Burnout in Singapore Among the Highest in the World A survey released by Cigna in March 2019, shows that Singaporeans are among the most stressed at work globally, with almost one in eight considering their stress unmanageable. In Singapore, work is a leading cause of rising stress levels, especially with the ‘always on’ corporate culture, particularly among women, the study suggests. Another study revealed that on average, Singaporeans work 23% longer than the average 48 hours work week. What is corporate burnout, and why employers should put more attention and resources to their employee benefits in Singapore to prevent and fight the work-related stress among their employees? What is, and what causes employee burnout? In May 2019, the WHO officially started to recognize burnout as an occupational phenomenon which may require care.

Japan is facing a 'death by overwork' problem — here's what it's all about, Business Insider - Business Insider Singapore Japan's work culture is so intense, people in the 1970s invented a word that translates to "death by overwork.""Karoshi," as it's known, involves employees committing suicide or suffering from heart failure and stroke because of long work hours.The Japanese federal government has taken steps to reduce karoshi cases, but experts fear the measures don't go far enough. Ever since the late 1970s, Japan has had a word to refer to people dying from spending too much time in the office: karoshi. The literal translation is "death by overwork." The latest employee death determined to be karoshi was 31-year-old journalist Miwa Sado. She reportedly logged 159 hours of overtime in one month at the news network NHK, before dying of heart failure in July 2013.

TODAYonline: Sleep-deprived Singaporean workers among most stressed globally: Survey Read more at SINGAPORE — Singaporeans are not only sleep deprived, but they are also among the most stressed at work globally, according to a survey by health service company Cigna released on Tuesday (Mar 26). Nearly 92 per cent of Singaporeans surveyed were stressed from work, which was higher than the global average of 84 per cent. Of this group, 13 per cent said that the stress they faced was unmanageable. Singaporeans’ physical wellness index also dipped by 4.4 percentage points from last year, which the survey attributed to an increase in sleepless nights. Of the 23 markets surveyed, Singapore had the fifth lowest wellness index, which was measured across five key indices — family, financial, physical, social and work. Singapore fell by a place from last year as its wellness index went down by 1.7 points to 57.8.

stress – APA Dictionary of Psychology n. 1. the physiological or psychological response to internal or external stressors. Stress involves changes affecting nearly every system of the body, influencing how people feel and behave. For example, it may be manifested by palpitations, sweating, dry mouth, shortness of breath, fidgeting, accelerated speech, augmentation of negative emotions (if already being experienced), and longer duration of stress fatigue.

Singapore ranks 32 out of 40 in new index on work-life balance, Business News SINGAPORE - Singapore is in the bottom quarter of 40 cities when it comes to work-life balance, according to a new study released on Wednesday (Aug 7). It comes in 32nd place, though it is ranked higher than the other three Asian cities considered - Hong Kong, Tokyo and Kuala Lumpur. This is in part due to the large amount of time that people here dedicate to their jobs. Singapore was ranked second highest for work intensity, which considers factors such as vacation days taken, paid maternal and parental leave, and the share of full-time employees working more than 48 hours per working week. Top of the list for overall work-life balance were Helsinki, Munich and Oslo, while the bottom three were Kuala Lumpur, Tokyo and Buenos Aires. The 40 cities were selected to include those known for attracting professionals and families for their work opportunities and diverse lifestyle offerings, said keyless access technology company Kisi, which published the study.

Karoshi: How overwork in Japan killed Miwa Sado, and hundreds like her - Insider Miwa Sado, 31, died after working more than 150 hours in overtime in a month.Her death has been classified as "karoshi" — death by overwork.Her parents recently spoke out in the hope of preventing more deaths.Experts attribute karoshi to Japan's toxic work culture and rigid labor market.The government is trying to halt the trend, but has yet to get very far. On July 25, 2013, Miwa Sado was found dead in her Tokyo apartment, clutching her mobile phone. Sado, a reporter for Japan's national broadcaster NHK, had died from congestive heart failure — meaning her heart had grown so weak it couldn't pump enough blood round her body. She was 31. NHK revealed Sado's death for the first time earlier this month, noting that the journalist's parents initially wanted to keep the death private.