Social Media Cheat Sheet (for brands) Trump's Twitter debate lead was 'swelled by bots' Image copyright Getty Images More than four times as many tweets were made by pro-Donald Trump bots in and around the first US presidential debate as the number made by those backing Hillary Clinton, a study found. 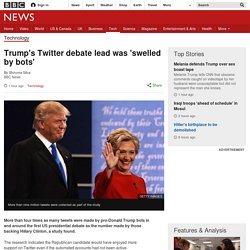 The research indicates the Republican candidate would have enjoyed more support on Twitter even if the automated accounts had not been active. But it highlights that the software has the capacity to "manipulate public opinion" and "muddy political issues". The report has yet to be peer-reviewed. Facebook, Twitter, And Breaking News’ Special Relationship - BuzzFeed News. Osborne warns of 'dangerous cocktail' of economic risks. Image copyright Getty Images The UK faces a "cocktail" of serious threats from a slowing global economy as 2016 begins, Chancellor George Osborne will warn. 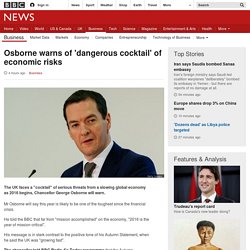 Mr Osborne will say this year is likely to be one of the toughest since the financial crisis. He told the BBC that far from "mission accomplished" on the economy, "2016 is the year of mission critical". His message is in stark contrast to the positive tone of his Autumn Statement, when he said the UK was "growing fast". People's racist Facebook comments are ending up on billboards near their homes. Racist commenters beware: Your words might show up in your own backyard. 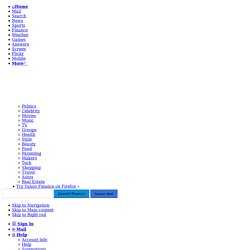 A new campaign in Brazil is plastering billboards with racist Facebook comments. Lack of Twitter geotags can’t stop researchers from getting location. The Lifecycle Of A Trend. As part of its ongoing Youth Culture Insights Series, Fuse Marketing is taking a look at how a trend is discovered, marketed, popularized, how it eventually reaches its demise. 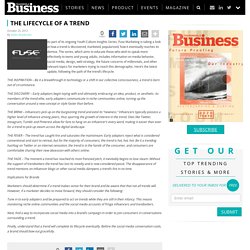 The series, which aims to educate those who wish to speak more effectively to teens and young adults, includes information on media behavior, social media, design, web strategy, the future concerns of millennials, and other relevant topics for marketers trying to reach this demographic. The Science Of Why You Should Spend Your Money On Experiences, Not Things. Most people are in the pursuit of happiness. 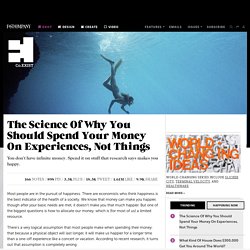 There are economists who think happiness is the best indicator of the health of a society. We know that money can make you happier, though after your basic needs are met, it doesn't make you that much happier. Viewpoint: Who are the people in the dark corners? - BBC News. There are many types of people who have been demonised in the age of social media - computer users who take refuge in anonymity to post extreme or offensive views. 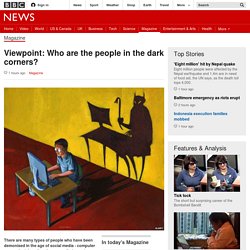 Jamie Bartlett wanted to talk to the people behind the masks. My heart was pounding as I waited for Paul to arrive at the train station where we'd agreed to meet. I'd been communicating with him for some time, all via the internet. Paul was a vitriolic, aggressive neo-Nazi who spent his life online producing and sharing White Pride propaganda. Trollbusters: This algorithm can predict if you're going to get banned. The way commenters write can be used to detect if they'll end up getting banned, according to US researchers working on troll-busting algorithms. 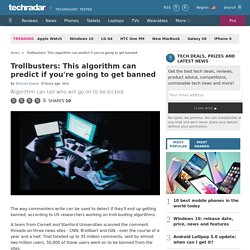 A team from Cornell and Stanford Universities scanned the comment threads on three news sites - CNN, Breitbart and IGN - over the course of a year and a half. That totalled up to 35 million comments, sent by almost two million users. 50,000 of those users went on to be banned from the sites. The researchers found that those banned users wrote in a different way to others. Their comments were generally harder to read and used fewer words that indicated positive emotion.

R.I.P. Blogging, Killed By Screenshorts. Late last year, Mat Honan wrote for Buzzfeed about “screenshorts”, a rising phenomenon on Twitter where people share their favorite quote of an article in a screenshot to avoid Twitter’s character count. 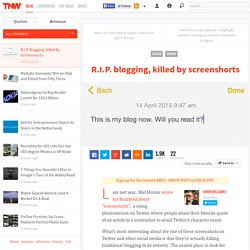 What’s most interesting about the rise of these screenshots on Twitter and other social media is that they’re actually killing traditional blogging in its entirety. The easiest place to look for this phenomenon is celebrities. Almost every celebrity under 40 that you can possibly think of has probably made a screenshort blog post. Researching this for just an hour reveals a staggering amount of famous people making incredibly formal statements… as a screenshot of the iOS notes app. Why is a Chinese takeaway box taking over election talk? - BBC News. People wanting to follow the general election campaign on Twitter have been using the hashtags #GE2015 and #GE15 but as these have become popular, they've attracted the attention of spam advertisers. 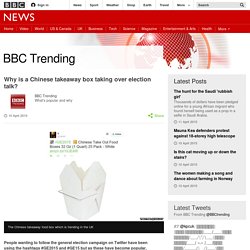 On Thursday, this image of a Chinese takeaway food box was the fourth most tweeted image under #GE2015. Behind the online comments: the psychology of internet trolls. Readers’ comments are an important, yet often overlooked, type of user-generated content. 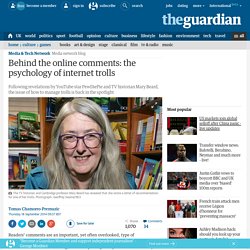 Twitter advertisers can now target ads based on the apps a user has installed. Antisocial networks: how to avoid Facebook 'friends' and irritate people. Think that Facebook, Twitter, Instagram and their ilk are out of control, and you would like to regain some of the privacy you once enjoyed? Help may be at hand in the form of "antisocial networking" – a clutch of new apps and websites designed to hide you from the seemingly irresistible march of technological intrusion.

Proudly billing itself as "the antisocial network", Cloak works by turning social media against itself, mining real-time geographical location data from Facebook, Twitter, Instagram and Foursquare accounts to warn you if your "friends" are nearby.