Cognitive bias cheat sheet – Better Humans. Great, how am I supposed to remember all of this? 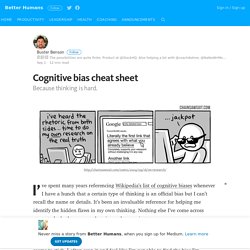 You don’t have to. But you can start by remembering these four giant problems our brains have evolved to deal with over the last few million years (and maybe bookmark this page if you want to occasionally reference it for the exact bias you’re looking for): Information overload sucks, so we aggressively filter. Noise becomes signal.Lack of meaning is confusing, so we fill in the gaps.

Signal becomes a story.Need to act fast lest we lose our chance, so we jump to conclusions. On Flipboard. 5 Common Mental Errors That Sway You From Making Good Decisions – Medium. I like to think of myself as a rational person, but I’m not one. 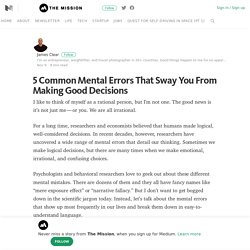 The good news is it’s not just me — or you. We are all irrational. For a long time, researchers and economists believed that humans made logical, well-considered decisions. In recent decades, however, researchers have uncovered a wide range of mental errors that derail our thinking. Sometimes we make logical decisions, but there are many times when we make emotional, irrational, and confusing choices. Psychologists and behavioral researchers love to geek out about these different mental mistakes.

Here are five common mental errors that sway you from making good decisions. Harvard researchers have mapped the five child-rearing techniques you need to raise kind kids. What makes highly creative people different from the rest of us? 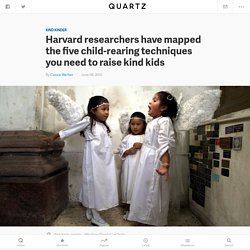 In the 1960s, psychologist and creativity researcher Frank X. Barron set about finding out. Barron conducted a series of experiments on some of his generation’s most renowned thinkers in an attempt to isolate the unique spark of creative genius. In a historic study, Barron invited a group of high-profile creators—including writers Truman Capote, William Carlos Williams, and Frank O’Connor, along with leading architects, scientists, entrepreneurs, and mathematicians—to spend several days living in a former frat house on the University of California at Berkeley campus. Carnegie Mellon made a special pair of glasses that lets you steal a digital identity — Quartz. In the final tense days before Americans go to the polls to pick the nation’s next president, it’s natural to assume that a loss for Donald Trump would deliver a nasty blow to the party that picked him as its nominee. 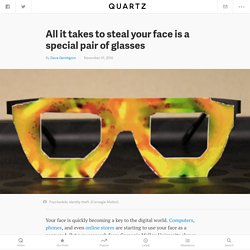 The Republican Party is already in crisis, with infighting over Trump and the party’s future; losing the presidency again, it stands to reason, would continue their downward spiral and could even lead to the party’s destruction. But nothing could be further from the truth. Win or lose the presidency, there’s almost no chance of the party actually dissolving, as the video above shows. Even a landslide loss for the party in the Nov. 8 elections would not seriously hurt the GOP—and might even be good for it. That’s because, contrary to what seems obvious, national elections aren’t actually a good reflection of a political party’s trajectory.

In other words, if Republicans lose big in this election, it doesn’t mean the country hates the GOP and what it stands for. How To Hack Your Brain For Creative Ideas Before You Even Get Out Of Bed. Eat. 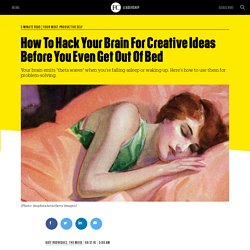 Sleep. Solve problems. Repeat. You probably spend a large part of your waking hours tackling challenges, especially when you’re at work. This six-minute short film plunges you into an augmented reality hellscape. Netflix Knows Which Pictures You'll Click On. It's still one of the great mysteries of the Internet: with the millions of images that bombard us on the web every day, what makes us click on one instead of another? 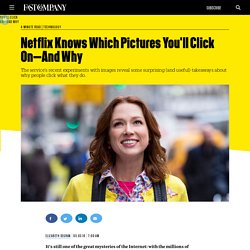 Are some pictures universally appealing, or is art always a matter of personal opinion? Netflix has been pondering these profound questions for years. After all, images are critical to getting you to binge: A small, compelling thumbnail could mean the difference between getting you to spend the entire weekend watching House of Cards or losing interest and bouncing over to Hulu. A powerful picture is an incredibly efficient tool: The human brain can process an image in just a few milliseconds, so the right picture can spark someone's interest and convince a viewer it's worth exploring a new show in a single glance. Which is why, in 2014, Netflix began gathering consumer research specifically about the images on its service.

How VR and real-time data are changing shopping. Real-time technology is revamping the world of bricks-and-mortar retail. 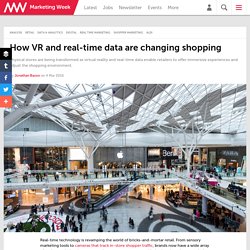 From sensory marketing tools to cameras that track in-store shopper traffic, brands now have a wide array of options to help adapt store environments to consumers’ behaviour in order to maximise sales. A new report by shopping centre operator Westfield claims that customers increasingly expect retailers to use technology to intervene in the shopping experience. It finds that 41% of UK shoppers are interested in using virtual reality (VR) headsets to experience products or services, while around a third would like stores to offer experiences that appeal to senses such as sound, smell and taste, in addition to sight and touch. Scientists have uncovered exactly what makes a photo memorable. My photo of a beautiful sunrise wasn’t memorable, but a ridiculous image of Silly Putty shaped like a poop emoji scored high. 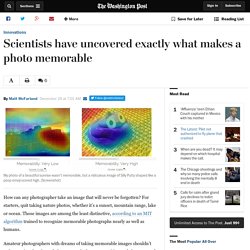 (Screenshot) How can any photographer take an image that will never be forgotten? Invisible portraits by Blommers & Schumm. Invisible portraits by Blommers & Schumm. Your Future Music Playlist Could Know How You Feel. Researchers at the University of Cambridge have linked musical taste to thinking style, with possible implications for how future algorithms might better tailor music recommendations. 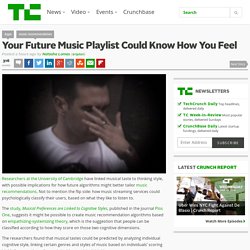 Not to mention the flip side: how music streaming services could psychologically classify their users, based on what they like to listen to. The study, Musical Preferences are Linked to Cognitive Styles, published in the journal Plos One, suggests it might be possible to create music recommendation algorithms based on empathizing-systemizing theory, which is the suggestion that people can be classified according to how they score on those two cognitive dimensions. The researchers found that musical tastes could be predicted by analyzing individual cognitive style, linking certain genres and styles of music based on individuals’ scoring highly for empathy or for analytical (systemizing) thinking.