Biology 30 - Evolution Project. Evolution vs Natural Selection. Teaching evolution. Evolution of Cancer article. Video: How do we stop invasive species? (ScienceAlert) Pepper Moths - Home. Diseases - Manual - Activity 3, page 1. At a Glance Focus: Students investigate the growth of bacteria in the presence of antibiotics and use the results to explain a case of antibiotic-resistant tuberculosis, presented in an Internet-based interview. 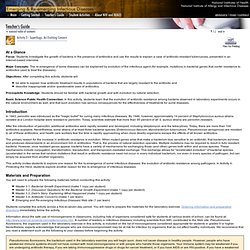 Major Concepts: The re-emergence of some diseases can be explained by evolution of the infectious agent (for example, mutations in bacterial genes that confer resistance to antibiotics used to treat the diseases). Objectives: After completing this activity, students will be able to explain how antibiotic treatment results in populations of bacteria that are largely resistant to the antibiotic and describe inappropriate and/or questionable uses of antibiotics. 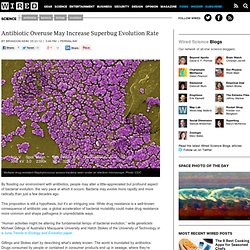 Photo: CDC By flooding our environment with antibiotics, people may alter a little-appreciated but profound aspect of bacterial evolution: the very pace at which it occurs. Bacteria may evolve more rapidly and more radically than just a few decades ago. This proposition is still a hypothesis, but it’s an intriguing one. While drug resistance is a well-known consequence of antibiotic use, a global acceleration of bacterial mutability could make drug resistance more common and shape pathogens in unpredictable ways. “Human activities might be altering the fundamental tempo of bacterial evolution,” write geneticists Michael Gillings of Australia’s Macquarie University and Hatch Stokes of the University of Technology in a June Trends in Ecology and Evolution paper.

Gillings and Stokes start by describing what’s widely known: The world is inundated by antibiotics. That much is obvious. Evoltion defined. Welcome to Evolution 101! 10 Vestigial Traits You Didn't Know You Had. Evolution Timeline. 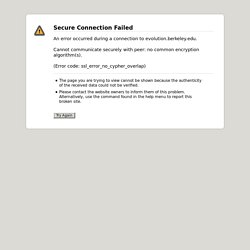 This question is difficult to answer because we can't replay the past with a stopwatch in hand. However, we can try to figure out what patterns we'd expect to observe in the fossil record if evolution did happen in bursts, or if evolution happened gradually. Then we can check these predictions against what we observe. What should we observe in the fossil record if evolution is slow and steady? In the above example, the preservation of many transitional forms, through layers representing a length of time, gives a complete record of slow and steady evolution. 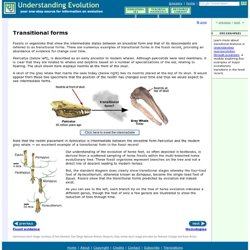 There are numerous examples of transitional forms in the fossil record, providing an abundance of evidence for change over time. Pakicetus (below left), is described as an early ancestor to modern whales. Although pakicetids were land mammals, it is clear that they are related to whales and dolphins based on a number of specializations of the ear, relating to hearing. The skull shown here displays nostrils at the front of the skull. A skull of the gray whale that roams the seas today (below right) has its nostrils placed at the top of its skull. Life Science. Learning Goals Which skull is a lizard and which is a snake? 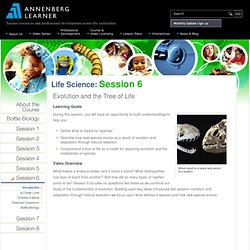 During this session, you will have an opportunity to build understandings to help you: Define what is meant by “species.” Describe how new species evolve as a result of variation and adaptation through natural selection. Comprehend a tree of life as a model for depicting evolution and the relatedness of species. Video Overview. Reproduction: One Goal, Two Methods : PBS LearningMedia. Welcome to Evolution 101! Classifying Life. Natural Selection - Natural Selection, Evolution, Mutation. How did feathers evolve? - Carl Zimmer.

Evolution. The driving force for molecular evolution of translation. What are viruses? Microbe Clock. Five fingers of evolution - Paul Andersen. In his talk, Paul Andersen explains the five causes of microevolution. 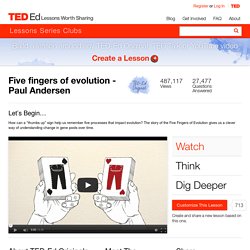 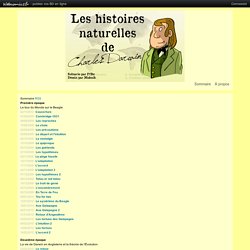