Article Series. All articles by M.K. 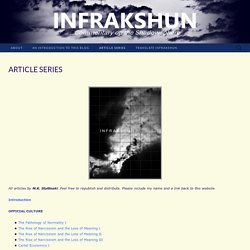 Styllinski. Feel free to republish and distribute. Please include my name and a link back to this website. Introduction Crossroads Community Dark Skies, Community and Cooperation Share this: All about the weird, wonderful and interesting things here on Earth. There are many well-known natural formations all over the world; The Grand Canyon, Niagara Falls and Mt Everest, to name a few. 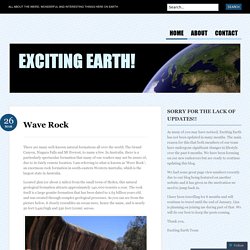 In Australia, there is a particularly spectacular formation that many of our readers may not be aware of, due to its fairly remote location. I am referring to what is known as ‘Wave Rock’; an enormous rock formation in south-eastern Western Australia, which is the largest state in Australia. Located 3km (or about 2 miles) from the small town of Hyden, this natural geological formation attracts approximately 140,000 tourists a year.

The rock itself is a large granite formation that has been dated to 2.63 billion years old, and was created through complex geological processes.

New Great Pyramid Mysteries & Discoveries. Inca: Demise Of A Royal Blood Line Of God Kings. By: Brien Foerster - MessageToEagle.com - Much has been documented, researched, and written about the major and decisive role that the arrival of the Spanish, under the leadership of Francisco Pizarro played in the overthrow of the Inca civilization. 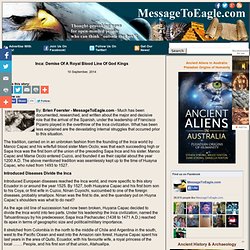 What has been less explained are the devastating internal struggles that occurred prior to this situation. Mystic Places - Ollantaytambo, Tiwanaku and Aramu Muru. Introduction | Stone Technology | Aramu Muru | Books | Websites Introduction At the northern end of the Sacred Valley, Ollantaytambo is rare if not unique in Peru. Ollantaytambo is a massive citadel located 50 kilometers from Machu Picchu.

Mysterious Artifacts: Glowing Black Pyramid With The Third Eye. MessageToEagle.com - Black Pyramid with the Eye (or UV fluorescent Third-Eye Pyramid) is one of the fascinating magnetic stone artifacts discovered by a group of gold prospectors working in underground tunnels of the mystical, jungle-covered mountains of La Maná, Ecuador in the 1980s. 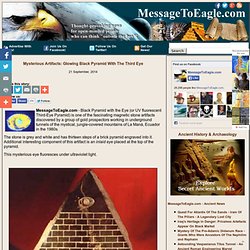 The stone is grey and white and has thirteen steps of a brick pyramid engraved into it. Additional interesting component of this artifact is an inlaid eye placed at the top of the pyramid. This mysterious eye fluoresces under ultraviolet light. This UV fluorescent Third-Eye Pyramid has yet another fascinating details in form of the inlay in little gold plates showing the Orion star constellation and the five symbols placed on the pyramid's bottom. List of Publications by Alexander Putney. Fritz Springmeier and His Work.

Templariusze. The largest stones of all time. 11) Karnak (Thebes), Egypt - Karnak now only contains three obelisks, all made of pink granite from the Aswan quarries 186 miles upriver. 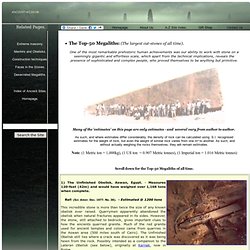 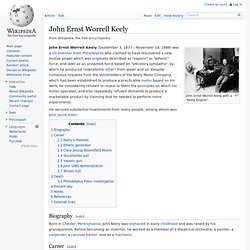 John Ernst Worrell Keely (September 3, 1837 – November 18, 1898) was a US inventor from Philadelphia who claimed to have discovered a new motive power which was originally described as "vaporic" or "etheric" force, and later as an unnamed force based on "vibratory sympathy", by which he produced "interatomic ether" from water and air. Despite numerous requests from the stockholders of the Keely Motor Company, which had been established to produce a practicable motor based on his work, he consistently refused to reveal to them the principles on which his motor operated, and also repeatedly refused demands to produce a marketable product by claiming that he needed to perform more experiments. He secured substantial investments from many people, among whom was John Jacob Astor.

Biography[edit] Career[edit] Keely's theories[edit] The mystery of the stones at baalbeck and the pregnant stone. Robert Fludd and His Images of The Divine. Vedic description of the soul - ISKCON Desire Tree - Devotee Network. The Vedic Description of the Soul Who am I? 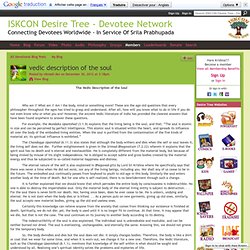 What am I? Am I the body, mind or something more? Babys aware at 49 days-pineal gland activated at 49 days. Pyramids in Sicilia. For a start I knew that about ten of these small pyramids had already been photographed from a certain distance by some Italian photographers, but since any further information about them was entirely lacking I decided to go with my team and see them on the ground. 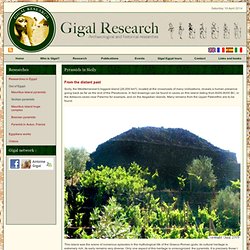 In fact all that was available was about ten snapshots of small pyramidal structures, taken from the same angle and sometimes from far away, with little explanation and no exact location. I also tried to make a satellite search before leaving, but it didn't give much result, so uneven is the dark lava ground, sometimes covered with fruit trees and vines. Staying in Catania for several days, then in Giardini Naxos, we spent our days, from 9 in the mooring to 3am the next morning, covering the whole area by car, systematically scanning each zone by stopping on average 300 times a day, in order to get out, follow small footpaths, climb hills, take photographs and take notes and some measurements.

Kumari Kandam. The Lost world of Kumari Kandam We already know about many legendary cities that today’s world has lost in time. 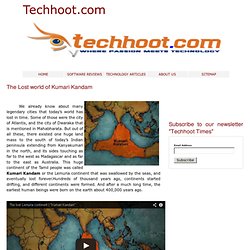 Some of those were the city of Atlantis, and the city of Dwaraka that is mentioned in Mahabharata. Ancient Civilizations. 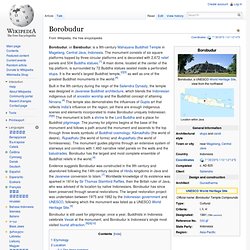 The monument consists of six square platforms topped by three circular platforms and is decorated with 2,672 relief panels and 504 Buddha statues.[1] A main dome, located at the center of the top platform, is surrounded by 72 Buddha statues seated inside a perforated stupa. It is the world’s largest Buddhist temple,[2][3] as well as one of the greatest Buddhist monuments in the world.[4]