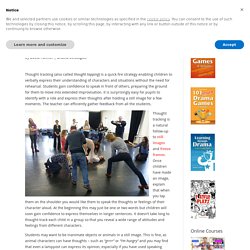 Students gain confidence to speak in front of others, preparing the ground for them to move into extended improvisation. It is surprisingly easy for pupils to identify with a role and express their thoughts after holding a still image for a few moments. The teacher can efficiently gather feedback from all the students. Thought tracking is a natural follow-up to still images and freeze frames. Once children have made an image, explain that when you tap them on the shoulder you would like them to speak the thoughts or feelings of their character aloud. Students may want to be inanimate objects or animals in a still image. The video is a sample from the Power Up online course by Drama Resource and NILE Online (available from January 2018). Conscience Alley. Conscience Alley A useful technique for exploring any kind of dilemma faced by a character, providing an opportunity to analyse a decisive moment in greater detail. 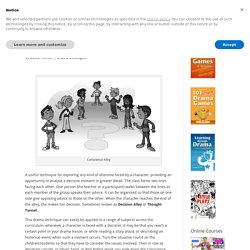 The class forms two lines facing each other. One person (the teacher or a participant) walks between the lines as each member of the group speaks their advice. It can be organised so that those on one side give opposing advice to those on the other. When the character reaches the end of the alley, she makes her decision. This drama technique can easily be applied to a range of subjects across the curriculum, whenever a character is faced with a decision. Read more about this in Learning Through Drama in the Primary Years. Snowball Technique - A Teaching Strategy.

The Snowball Technique is a way for students to teach each other important concepts and information. 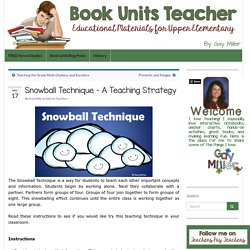 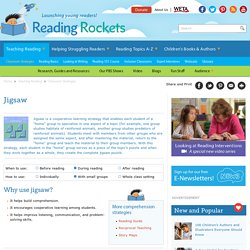 Jigsaw Classroom: Overview of the technique. Aronson, E., & Goode, E. (1980). Training teachers to implement jigsaw learning: A manual for teachers. In S. Sharan, P. Aronson, E., & Patnoe, S. (1997). Clarke, J. (1994). Spoken language in the curriculum. There is now a spoken language programme of study in the primary curriculum (instead of a 'speaking and listening' strand), and oral language skills are further integrated within other areas of the curriculum. 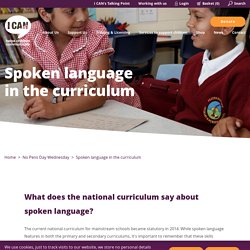 Level descriptors outlining progress towards attainment are not specified and schools can use their own ways of monitoring and reporting on progress in spoken language within the curriculum. Full details can be found throughout the full National Curriculum for key stages 1 and 2 document here: In the English programme of study, there is a statutory spoken language programme of study. This has twelve statutory requirements which cover the whole of the primary age range. Guidance outlines that schools should teach the content for these statements at a level appropriate to the age of the pupils and build on the oral language skills they have been previously taught.There is also a strong focus on all elements of language skills in the other 3 areas of the English curriculum. 10 ways to use Barrier Games for fun and learning / Talking Matters, Adelaide, South Australia.

Barrier games are fantastic resources to support your child’s speech and language skills, and the best part, anyone can use them; speech pathologists, teachers, child-care workers, parents, and support workers! 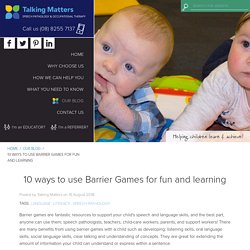 There are many benefits from using barrier games with a child such as developing: listening skills, oral language skills, social language skills, clear talking and understanding of concepts. They are great for extending the amount of information your child can understand or express within a sentence. What are barrier games? Barrier games are played like the board game Battleship. Two people sit opposite each other with a barrier (e.g. box, or book) in the space between them. Bonus: Barrier games can also be played in a group setting! Where can I find barrier games? One of the great features about barrier games is that they can be flexible, portable, and inexpensive and suited for a wide range of age groups! Your Speech Pathologist can supply you with picture sets.