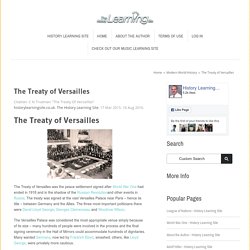 The treaty was signed at the vast Versailles Palace near Paris – hence its title – between Germany and the Allies. The three most important politicians there were David Lloyd George, Georges Clemenceau and Woodrow Wilson. The Versailles Palace was considered the most appropriate venue simply because of its size – many hundreds of people were involved in the process and the final signing ceremony in the Hall of Mirrors could accommodate hundreds of dignitaries. Many wanted Germany, now led by Friedrich Ebert, smashed; others, like Lloyd George, were privately more cautious.World War One had left Europe devastated. Those countries that had fought in it, had suffered casualties never experienced before: Those who had fought against the Allies suffered heavy casualties as well: His public image was simple. Territorial Military 1. World War Two - Causes. 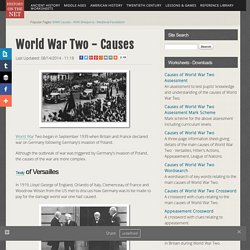 Although the outbreak of war was triggered by Germany's invasion of Poland, the causes of the war are more complex. Treaty of Versailles In 1919, Lloyd George of England, Orlando of Italy, Clemenceau of France and Woodrow Wilson from the US met to discuss how Germany was to be made to pay for the damage world war one had caused. Woodrow Wilson wanted a treaty based on his 14-point plan which he believed would bring peace to Europe. Georges Clemenceau wanted revenge. Lloyd George personally agreed with Wilson but knew that the British public agreed with Clemenceau. History of Fashion 1920's - 1930's. History of Fashion 1920’s – 1930’s ‘Fashion is not something that exists in dresses only. 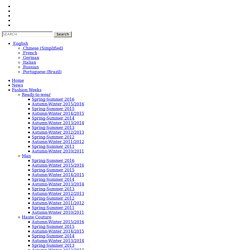 Fashion is in the sky, in the street, fashion has to do with ideas, the way we live, what is happening’ Coco Chanel Copyright © AFP/Collection Roger-Viollet – Concours d’élégance en 1925. Apartheid and reactions to it. The architects of Apartheid. © Apartheid Museum Archive. 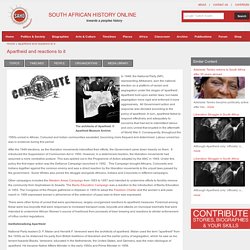 In 1948, the National Party (NP), representing Afrikaners, won the national election on a platform of racism and segregation under the slogan of 'apartheid’. Apartheid built upon earlier laws, but made segregation more rigid and enforced it more aggressively. All Government action and response was decided according to the policy of apartheid. In turn, apartheid failed to respond effectively and adequately to concerns that had led to intermittent labour and civic unrest that erupted in the aftermath of World War II. Consequently, throughout the 1950s unrest in African, Coloured and Indian communities escalated, becoming more frequent and determined. After the 1948 elections, as the liberation movements intensified their efforts, the Government came down heavily on them.

Other campaigns included the Western Areas Campaign from 1953 to 1957 and intended to undermine efforts to forcibly remove the community from Sophiatown to Soweto. Best of History Web Sites. Learning - History: Learning resources and online courses. EyeWitness to History - history through the eyes of those who lived it. HistoryWorld - History and Timelines. Henry VIII - The Most Iconic King of English History. The Rosetta Stone Ancient Egypt Full Length History Video Documentary Full Movie. Secrets of the Egyptian Pyramids HD. Medieval Apocalypse The Black Death National Geographic History channel HD Documentary.