Book Profile: Salvation in Full Color. Unputdownable: 17 books I read in 24 hours or less (because they were just that good) – Modern Mrs. Darcy. Every once in a while, I pick up a book that’s so compelling I just can’t put it down until I reach the last page. 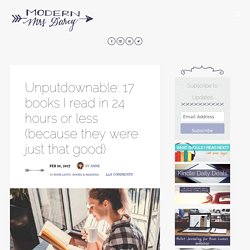 Sometimes it’s because the book is flat-out amazing; sometimes it’s because the book is good enough and the plot is amazing. Un-put-down-able books, for me, have certain qualities: great characters, strong narrative drive, a premise that hooks me. Barack Obama's book recommendations: POTUS' reading list. Whether he’s reading to kids at the White House, hitting up local bookstores on Black Friday, or giving recommendations to his daughters, President Barack Obama may as well be known as the Commander in Books. 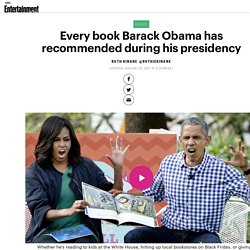 POTUS is an avid reader and recently spoke to the New York Times about the significant, informative and inspirational role literature has played in his presidency, crediting books for allowing him to “slow down and get perspective.” With his presidency coming to an end this Friday, EW looked back at Obama’s lit picks over the years — because it can’t hurt to read like a great leader. #ObamaForBookClubPresident2017, anyone? 12 Powerful Books to Help You Live More Simply. Hemingway’s Advice on Writing, Ambition, the Art of Revision, and His Reading List of Essential Books for Aspiring Writers. “As a writer you should not judge. 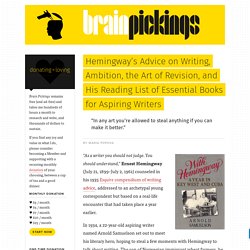 You should understand,” Ernest Hemingway (July 21, 1899–July 2, 1961) counseled in his 1935 Esquire compendium of writing advice, addressed to an archetypal young correspondent but based on a real-life encounter that had taken place a year earlier. In 1934, a 22-year-old aspiring writer named Arnold Samuelson set out to meet his literary hero, hoping to steal a few moments with Hemingway to talk about writing.

The son of Norwegian immigrant wheat farmers, he had just completed his coursework in journalism at the University of Minnesota, but had refused to pay the $5 diploma fee. My Top Books of 2015. 2015 was a pretty good year for Christian readers, and today I want to share some of my top picks from the year that is swiftly drawing to a close. 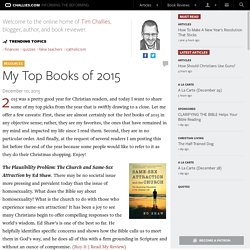 Let me offer a few caveats: First, these are almost certainly not the best books of 2015 in any objective sense; rather, they are my favorites, the ones that have remained in my mind and impacted my life since I read them. Second, they are in no particular order. And finally, at the request of several readers I am posting this list before the end of the year because some people would like to refer to it as they do their Christmas shopping. Enjoy! The Plausibility Problem: The Church and Same-Sex Attraction by Ed Shaw. A Charlie Brown Religion: Exploring the Spiritual Life and Work of Charles M. We Cannot Be Silent: Speaking Truth to a Culture Redefining Sex, Marriage, and the Very Meaning of Right and Wrong by Al Mohler. Books That Shed Light on the 2016 Election. Some political figures have also been writers: Winston Churchill won the Nobel Prize in Literature, and President Obama was a regular contributor to the literary magazine at Columbia University. 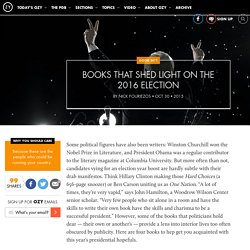 But more often than not, candidates vying for an election year boost are hardly subtle with their drab manifestos. Think Hillary Clinton making those Hard Choices (a 656-page snoozer) or Ben Carson uniting us as One Nation. “A lot of times, they’re very vapid,” says John Hamilton, a Woodrow Wilson Center senior scholar.

“Very few people who sit alone in a room and have the skills to write their own book have the skills and charisma to be a successful president.” However, some of the books that politicians hold dear — their own or another’s — provide a lens into interior lives too often obscured by publicity. Rules for Radicals by Saul Alinsky Politician: Hillary Clinton. Boston College Prof: "6 Books I Would Assign to Save Western Civilization" Now is the time for the ‘least likely’ to step up to the plate. Oskar Schindler was an alcoholic womanizer. 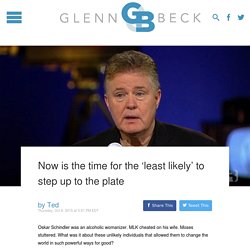 MLK cheated on his wife. Moses stuttered. What was it about these unlikely individuals that allowed them to change the world in such powerful ways for good? Glenn brought historian and theologian Dr. Jim Garlow and his wife – a direct relative of Oskar Schindler – onto his radio program to talk about what set these people apart. 'Holy Ghost Reborn' Will Leave You in Tears — Charisma News. Today WP Films released the first trailer for my new film, Holy Ghost Reborn, which you can see here. 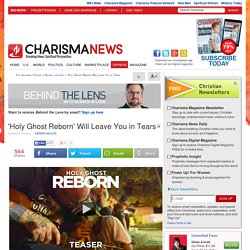 We're also announcing our American Tour, a massive Worldwide Screening Launch, and the official date of the DVD release. Needless to say, it's a big day for us. Holy Ghost (that's the first one—Reborn is the sequel) was something new for me and my team. It was a bright fireball in the sky that caused a lot of eyeballs to turn toward it. In the past, my films felt more like movies people found, but this movie felt almost like an event.