Bringing Order to Chaos: Simplifying the Retail Customer Transaction for Enhanced Service Experiences. In today's global retail industry, the customer experience matters more than ever before. 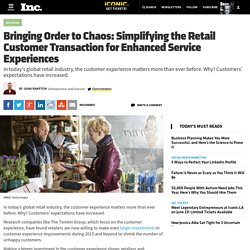 But the question is whether they understand what actually makes customers unhappy in the first place. After all, if 96% of unhappy customers never complain and 91% defect to the competition, there is a critical need to understand more about what is making customers unhappy. What Retail Customer Expect The Temkin Group also identified three main components to a retail customer's expectations. The Shut-In Economy — Matter. In 1998, Carnegie Mellon researchers warned that the internet could make us into hermits. 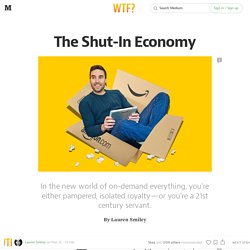 They released a study monitoring the social behavior of 169 people making their first forays online. The web-surfers started talking less with family and friends, and grew more isolated and depressed. “We were surprised to find that what is a social technology has such anti-social consequences,” said one of the researchers at the time. “And these are the same people who, when asked, describe the Internet as a positive thing.” We’re now deep into the bombastic buildout of the on-demand economy— with investment in the apps, platforms and services surging exponentially. Many services promote themselves as life-expanding — there to free up your time so you can spend it connecting with the people you care about, not standing at the post office with strangers. Basically, people a lot like herself. Suddenly, for people like van Ekert, the end of chores is here.

So here’s the big question. Imagineering the Omni-Channel User Experience at Disney. At the start of 2014, we called cross channel experiences a major trend to watch. 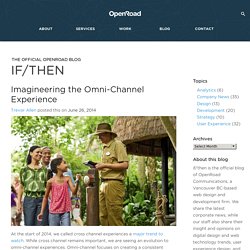 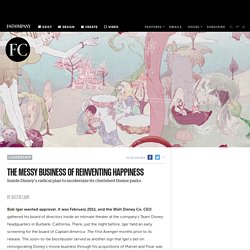 It was February 2011, and the Walt Disney Co. CEO gathered his board of directors inside an intimate theater at the company’s Team Disney headquarters in Burbank, California. There, just the night before, Iger held an early screening for the board of Captain America: The First Avenger months prior to its release. The soon-to-be blockbuster served as another sign that Iger’s bet on reinvigorating Disney’s movie business through his acquisitions of Marvel and Pixar was paying off big.

Now, with his directors reassembled and sitting in the first few rows of the theater, Iger set his sights on his next gamble, his boldest yet: to reinvent the brand’s most beloved asset, Disney’s iconic parks. Iger planned to pump nearly $1 billion into this venture, called MyMagic+, a sweeping plan to overhaul the digital infrastructure of Disney’s theme parks, which would upend how they operated and connected with consumers.

Get Ready For The Real Story Behind Disney's $1 Billion Attempt To Reinvent Its Iconic Theme Park. Since as early as 2007, Disney has been working on MyMagic+, an innovative project to reinvent the experience at its iconic Disney World park. 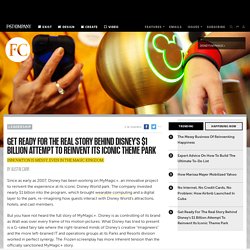 The company invested nearly $1 billion into the program, which brought wearable computing and a digital layer to the park, re-imagining how guests interact with Disney World's attractions, hotels, and cast members. But you have not heard the full story of MyMagic+. Disney is as controlling of its brand as Walt was over every frame of his motion pictures. What Disney has tried to present is a G-rated fairy tale where the right-brained minds of Disney’s creative "Imagineers" and the more left-brained IT and operations groups at its Parks and Resorts division worked in perfect synergy. The Frozen screenplay has more inherent tension than the officially sanctioned MyMagic+ story. Tomorrow, my feature story on Disney’s MyMagic+ will go live online and hit newsstands.