So you’re tired of hearing about “rape culture”? The following includes descriptions, photos, and video that may serve as a trigger for victims of sexual violence. 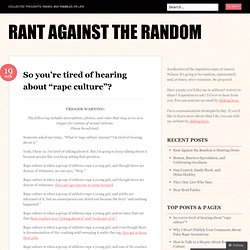 Please be advised. Someone asked me today, “What is ‘rape culture’ anyway? I’m tired of hearing about it.” GEN SILENT. Men Don't Always Think About Sex. Just Sometimes -- and the Same Goes for Women, Too Why do I need to register or sign in for WebMD to save?

We will provide you with a dropdown of all your saved articles when you are registered and signed in. Nov. 29, 2011 -- Men do think about sex more often than women overall, but not all the time -- and the gap is not as wide as you might think, a new study finds. "The absolute number of sexual thoughts is dramatically less than the urban legend that men think about sex every seven seconds," says study researcher Terri Fisher, PhD, professor of psychology at The Ohio State University at Mansfield. She isn't sure where that seven-second figure originated. Morning Erections – What Causes Nighttime and Morning Erections?

Many young men, and even some older ones who haven’t found the right people to ask, are curious about morning erections. 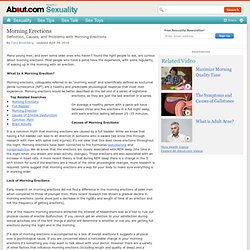 Most people who have a penis have the experience, with some regularity, of waking up in the morning with an erection. What Is A Morning Erection? Morning erections, colloquially referred to as "morning wood" and scientifically defined as nocturnal penile tumescence (NPT) are a healthy and predictable physiological response that most men experience. Morning erections would be better described as the tail end of a series of nighttime erections, as they are just the last erection in a series. All The Things Women Wish They’d Said to Doctors, Nurses & Midwives. Since my last post about finding our voices as women I’ve seen several articles, blog posts and Facebook comments, along with a couple personal experiences related to this subject. 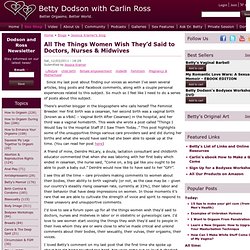 So much so I feel like I need to do a series of posts about this subject. There’s another blogger in the blogosphere who calls herself The Feminist Breeder. Her first birth was a cesarean, her second birth was a vaginal birth (known as a VBAC – Vaginal Birth After Cesarean) in the hospital, and her third was a vaginal homebirth. This week she wrote a post called “Things I Would Say to the Hospital Staff If I Saw Them Today…” This post highlights some of the unsupportive things various care providers said and did during her births and what she would have said had she been able to speak up at the time. 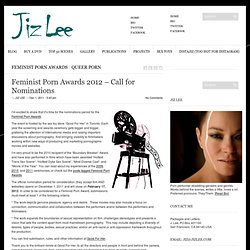 The event is hosted by the sex toy store “Good For Her” in Toronto. Each year the screening and awards ceremony gets bigger and bigger, grabbing the attention of international media and raising important discussions about pornography. And bringing visibility to filmmakers working within new ways of producing and marketing pornographic movies and websites. I’m very proud to be the 2010 recipient of the “Boundary Breaker” Award, and have also performed in films which have been awarded “Hottest Trans Sex Scene”, “Hottest Dyke Sex Scene”, “Most Diverse Cast”, and “Movie of the Year”. Maybe Days - Omnipresent eroticization can suck my big, intellisexual cock. I wrote an article about polyamory, examining the value of “literal social networks” using technology as a lens with which to understand it, titled “Non-monogamy: A Human Internet for Compassionate Payloads.”

While a valid and potentially constructive critique, certainly, it didn’t sit well with me. Is Generosity Better Than Sex? Hammerpress This column appears in the Dec. 11 issue of The New York Times Magazine. 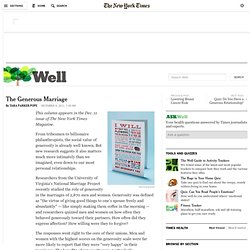 (Updated) Teen birth rates are eight times higher in the U.S. than in Holland. Abortion rates are twice as high. The American AIDS rate is three times greater than that of the Dutch. What are they doing right that we’re not? For starters, two-thirds of Dutch parents report allowing their teenage children to have sleepovers with their boyfriend or girlfriend, a situation even the most liberal American parents would rarely permit. I don’t want to have sex « Diary of a Lipstick Terrorist. This is the first part of 2 posts on hypersexualisation within the queer scene. 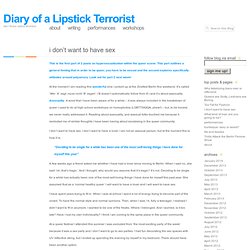 For many LGBT people, it can feel like everyone is expected to be straight. Margaret Brooks’ Sex Week “Concern” highlights the intersection of sex-negativity and adultism. Sex-negativity often goes hand-in-hand with adultism, a form of ageism that discriminates against young people considered “not adults.” 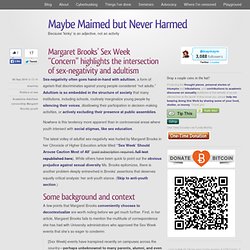 Adultism is so embedded in the structure of society that many institutions, including schools, routinely marginalize young people by silencing their voices, disallowing their participation in decision-making activities, or actively excluding their presence at public assemblies. Nowhere is this tendency more apparent than in controversial areas where youth intersect with social stigmas, like sex education. The latest volley of adultist sex-negativity was hurled by Margaret Brooks in her Chronicle of Higher Education article titled “‘Sex Week’ Should Arouse Caution Most of All” (paid subscription required, full text republished here). While others have been quick to point out the obvious prejudice against sexual diversity Ms. ABOUT « Reteaching Gender And Sexuality. International Day to End Violence Against Sex Workers - early to bed: sex toys, sex advice, vibes, and dildos.