Places to travel to 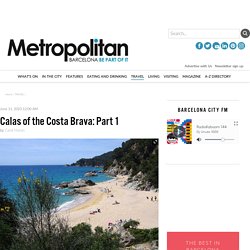 It personifies the unique, picture-perfect coves of the Costa Brava, concealed within the intricate contortion of rugged coastline that stretches from Blanes to the French border. In the first of a two-part series, we present our recommendations for exploring some super calas of the Costa Brava—big, small, known and lesser-known—starting from Cala de Sant Francesc in Blanes and working our way north. 1. Cala de Sant Francesc, Blanes Two kilometers north of Blanes lies Cala Sant Francesc, the finest beach in the area. 2. This is the most unspoiled beach in the vicinity of Lloret de Mar. 3.

A true beauty spot with a family atmosphere, this tiny sheltered cove is located between Cala Bona and Cala Giverola along a spectacular, windy stretch of coast between Tossa de Mar and Sant Feliu de Guíxols. 4. 5. 6. Coming Soon. 20 of the most beautiful villages in France. 1. 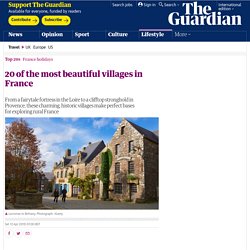 Locronan, Brittany A historic hemp-weaving village, Locronan is named after Saint Ronan, the Irish hermit who founded it in the middle ages. In the 15th century, the dukes of Brittany poured money into building the striking Gothic church. Visit the Chapelle du Pénity, which houses Saint Ronan’s tomb. During the Renaissance, the village became famous for its weaving industry, providing canvas sails for the East India Company and the French navy (visit the Musée d’Art et d’Histoire). The 16th-century Chapelle Notre-Dame-de-Bonne-Nouvelle has stained-glass windows by 20th-century painter Alfred Manessier. 2. Halfway between the Gulf of Morbihan and Merlin’s Forêt de Brocéliande, this medieval village was once a roche fort (stronghold), controlling trade routes thanks to its position on a rocky outcrop above deep valleys.

10 of the best activity and adventure holidays: readers’ travel tips. Winning tip: Mountain biking, New Zealand There is an almost infinite list of outdoor activities for any ability in Queenstown, South Island. 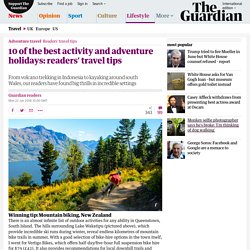 The hills surrounding Lake Wakatipu (pictured above), which provide incredible ski runs during winter, reveal endless kilometres of mountain bike trails in summer. With a good selection of bike-hire options in the town itself, I went for Vertigo Bikes, which offers half-day/five-hour full suspension bike hire for $79 (£42). It also provides recommendations for local downhill trails and cross-country rides all within half an hour’s ride of the town centre. There is a wide range of accommodation in the town.• vertigobikes.co.nzJames Cobb Kayaking off Pembrokeshire I thought walking the Pembrokeshire Coast path was awe-inspiring but my breath was truly taken while sea kayaking along the coast’s secret bays and petrified lava flow cliffs. Hairy cycling, Bolivia Volcano hiking, Indonesia. Passing panorama: New Zealand’s glory from a train window. It’s 8.15am on the dot and with one mellow toot the TranzAlpine passenger train is off on its journey from Christchuch to Greymouth. 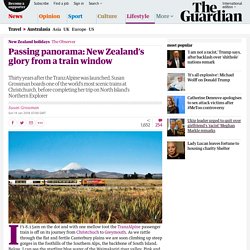 As we rattle through the flat and fertile Canterbury plains we are soon climbing up steep gorges in the foothills of the Southern Alps, the backbone of South Island. Below, I can see the startling blue water of the Waimakariri river valley. Pink and blue lupins line the tracks along with rows of pines. The railway covers 223km, tracking its way over four viaducts and through 16 tunnels, taking four and a half hours to Greymouth on the west coast – a tad faster than the stage coaches that took two days to get food across to gold prospectors in 1866. 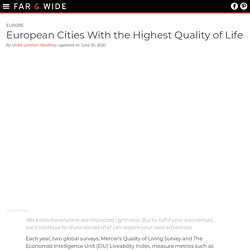 But to fulfill your wanderlust, we'll continue to share stories that can inspire your next adventure. Each year, two global surveys, Mercer's Quality of Living Survey and The Economist Intelligence Unit (EIU) Liveability Index, measure metrics such as crime rates, healthcare, infrastructure, quality of water, levels of corruption, culture and education, down to availability of sporting facilities and environmental concerns.

Top European Islands to Visit. Partying, relaxing or sightseeing, there are European islands to please almost any traveler.Getty Images At times it’s easy to forget that continental Europe is surrounded by a remarkable selection of islands. 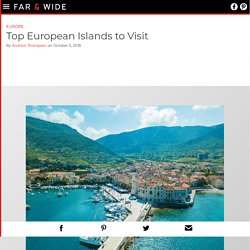 If you’re hankering for an island getaway — and, truthfully, who isn’t? — there’s likely to be at least one that ticks all your boxes. Or, you could make islands the focus of your entire trip and hop between several — with easy flights and ferries between famous archipelagos, it’s now easier than ever to have a European island holiday. There are several factors to consider if you’re struggling to decide on which island, or islands, to visit.

Budget plays a role, too — getting to and from these islands isn’t always easy, and as a result, prices are often steep.