Real-time data keeps outdoor advertising current. One way retailers are looking to bridge this gap is by using real-time data and principles of behavioural economics to increase the relevancy and timeliness of well located out-of-home ads, to nudge consumers into action. 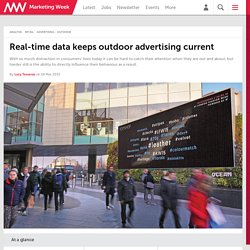 “With technology and the sense of immediacy that everybody has now, it is really shifting customers’ behaviour and influencing what they want and when they want it,” says Sheena Sauvaire, global marketing and communications director at Topshop. In order to meet consumers’ ever-more urgent demands for the latest looks and “democratise the fashion industry”, the retailer joined forces with Twitter during London Fashion Week last month to analyse data and identify trending topics as they emerged from the catwalk. These trends were then displayed almost immediately on digital billboards in London and other key UK cities, all of which were within a 10-minute walk of a Topshop store. “Customers want to be part of the conversation. Meet supply and demand. The Retail Planner - Retail + Digital. Marc Jacobs launches digital-themed fragrance pop-ups in London – Fashion & Mash.

Marc Jacobs is sparing no effort to promote its fragrances in London at present. 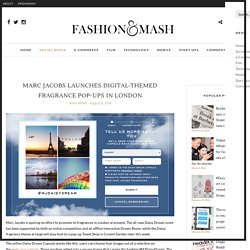 The all-new Daisy Dream scent has been supported by both an online competition and an offline interactive Dream Room, while the Daisy fragrance theme at large will play host to a pop-up Tweet Shop in Covent Garden later this week. The online Daisy Dream Capsule works like this: users can choose four images out of a selection on the dedicated website. These are then added into a square frame that carries the hashtag #MJDaisyDream. The resulting collage, which slightly resembles a polaroid, represents the ‘dream capsule’.

After entering one’s country, name and email, the capsule can be submitted and shared on Facebook, Twitter, Pinterest or Tumblr. Interview: Nick Knight & The Future of Fashion - Topshop Blog. After shooting our Topshop Unique catwalk collection live on Instagram, we chat to legendary fashion photographer and SHOWstudio founder, Nick Knight. 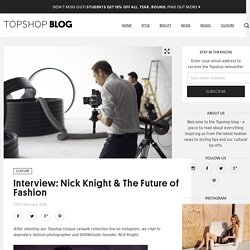 “I always wanted to make my work totally accessible – not to debunk fashion, or make it any less elite, but to show something that people weren’t allowed to see.” Nick Knight has shot and collaborated with some of the most exclusive names in fashion (John Galliano, Vogue, Kate Moss and Yves Saint Laurent to name very few), but speaking to him after our AW16 catwalk show, it’s clear that he shares Topshop’s mission to democratise the fashion world. This idea of inclusivity was part of his motivation to launch SHOWstudio in 2000, a website that embraced the Internet as a new platform for fashion film. Six brands doing digital for London Fashion Week AW16. But all is not well in haute couture. 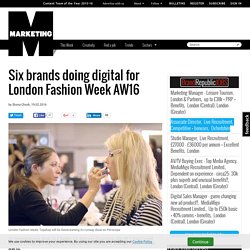 In its most recent trading update in January, Burberry described a "tougher environment" for sales, while Hermes warned that it wouldn’t be able to match last year’s record growth in 2016. Luxury brands have felt the effects of a slowdown in China – Louis Vuitton shut three stores there in November – and the fact that fewer tourists are flocking to Paris to shop after November’s terrorist attacks. On top of that, there’s the rise of the ‘insta-consumer’, who is used to a Netflix-style economy where everything is on-demand. 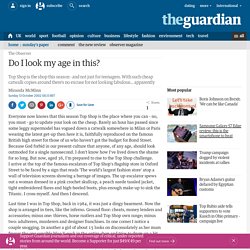 Barely an hour has passed since some leggy supermodel has vogued down a catwalk somewhere in Milan or Paris wearing the latest get-up then here it is, faithfully reproduced on the famous British high street for those of us who haven't got the budget for Bond Street. Because God forbid in our present culture that anyone, of any age, should look outmoded for a single nanosecond. I don't know how I've lived down the shame for so long. But now, aged 36, I'm prepared to rise to the Top Shop challenge. Topshop to stream London Fashion Week catwalk show via Periscope video feed. BRAND STRATEGY - TOPSHOP. Superbrands case studies: Topshop. Originally published in 'Consumer Superbrands Volume VI', July 2004. 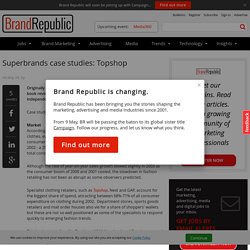 The book reviews the UK's strongest consumer brands as judged by an independent judging panel. Case study provided by Superbrands. MarketAccording to Mintel (August 2003), UK consumers keep on spending on clothes, even when they are cutting back in other areas, with total consumer expenditure on clothing in the UK reaching £34,825 million in 2002 - a 25.3% increase compared to 1998. This exceeds the growth of total consumer expenditure in the UK over the same period. Although the rate of year-on-year sales growth slowed slightly in 2003 as the consumer boom of 2000 and 2001 cooled, the slowdown in fashion retailing has not been as abrupt as some observers predicted.

Specialist clothing retailers, such as Topshop, Next and GAP, account for the biggest share of spend, attracting between 68%-71% of all consumer expenditure on clothing during 2002. Topshop does not only sell its products via its stores.