Omni-channel retail: joining up the consumer experience. The exponential growth of digital has created an environment that 20 years ago didn't exist, and even today we are still finding our way around it. 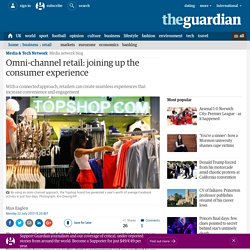 Forbes Welcome. How Retailers can Drive Footfall through Social Channels. News that over a quarter of British shoppers now follow a retailer on social media reminds us how far social has come in the last decade. 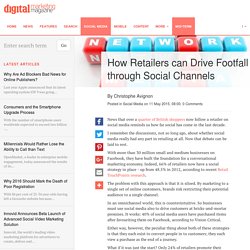 I remember the discussions, not so long ago, about whether social media really had any part in retailing at all. Now that debate can be laid to rest. With more than 30 million small and medium businesses on Facebook, they have built the foundation for a conversational marketing economy. New flagship H&M store relies on technology to provide a state-of-the-art customer experience. Fitch. The best of what is happening on Periscope, everyday. [Interview] How River Island’s Stylish Social Strategies Connect With Over 3 Million Fans.

With their fashionable contemporary clothing and engaging marketing strategy, River Island have built up a social media audience larger than the population of Uruguay. 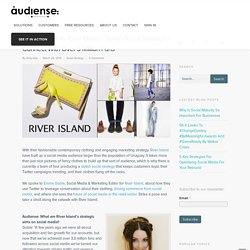 Periscope Is Secretly Building An Apple TV App. Periscope is developing an app for the new Apple TV, according to multiple sources. 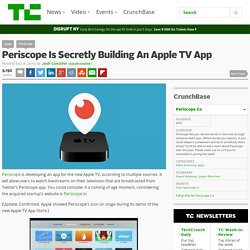 It will allow users to watch livestreams on their television that are broadcasted from Twitter’s Periscope app. You could consider it a coming of age moment, considering the acquired startup’s website is Periscope.tv [Update: Confirmed. Apple showed Periscope’s icon on stage during its demo of the new Apple TV App Store.] Tomorrow, Apple will unveil an upgraded Apple TV set-top box that includes an Apple TV App Store featuring apps built by third-party developers, BuzzFeed News previously reported.

Though we can’t confirm the exact functionality of the app, it’s likely to be focused on watching streams. /r/periscopes. /r/periscopes Periscope’s success is built upon our dedicated community of broadcasters, audience members, and more inconspicuously, yet no less notably, curators — individuals who often find and highlight the most interesting moments on Periscope. 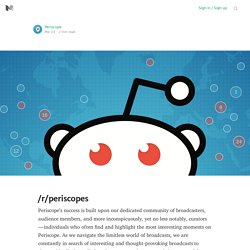 Periscope, Meerkat, YouNow: Which Live Streaming App Is Right for You. With the advent of live video streaming apps, it's now easier than ever to life-cast to your social media followers or even build a legion of fans online. 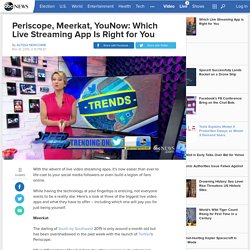 While having the technology at your fingertips is enticing, not everyone wants to be a reality star. Making social media human: 10 important tips for brands. (c)iStock.com/CharlieAJA Consumers are increasingly engaging with brands via digital means, thanks to the proliferation of connected devices and online services. 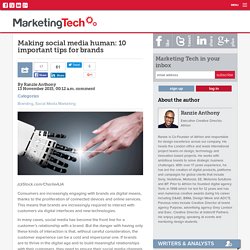 This means that brands are increasingly required to interact with customers via digital interfaces and new technologies. In many cases, social media has become the front line for a customer’s relationship with a brand. But the danger with having only these kinds of interaction is that, without careful consideration, the customer experience can be a cold and impersonal one. Meerkat and Periscope for brands 101: Where to go...and what not to do. (c)iStock.com/bartvdd For today’s marketer, the birth of a new social platform is akin to being a kid in a candy store. 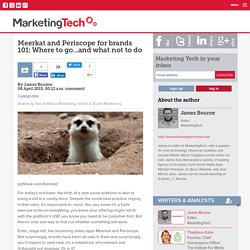 Despite the social best practice ringing in their ears, it’s impossible to resist. In the Battle of Meerkat vs. Periscope, Who’s Winning? In the past few months, livestreaming has taken the digital world by storm, connecting users around the world to sporting events, concerts, breaking news, and product launches. 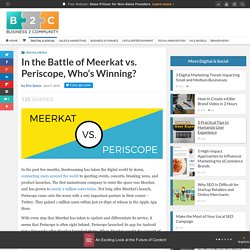 The first mainstream company to enter the space was Meerkat, and has grown to nearly 2 million users today. Not long after Meerkat’s launch, Periscope came onto the scene with a very important partner in their corner – Twitter. They gained 1 million users within just 10 days of release in the Apple App Store. Brands begin to see marketing benefits in livestreaming. How are Meerkat and Periscope making money? - Quora. Uk.businessinsider. On Periscope's First Birthday? A Growing List of Livestreaming Competitors. Meerkat Is Ditching the livestream. The Marketer’s Guide to Periscope. Everyone and their mom knows that Periscope is becoming more and more popular. 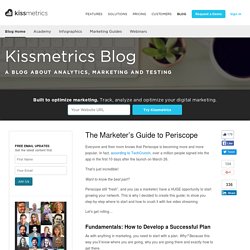 In fact, according to TechCrunch, over a million people signed into the app in the first 10 days after the launch on March 26. Three reasons marketers should embrace Periscope live streaming. Despite only launching eight weeks ago, the Twitter-owned live streaming app Periscope, which allows users to broadcast live video straight from their smartphones, already generates 10 years of content daily according to its CEO Kayvon Beykpour. And, earlier this week, it widened its reach to mobile users by launching on Android devices. What live-streaming apps mean for the fashion industry. The battle of the live-streaming apps has begun: joining residing champ Meerkat in the ring is Twitter’s new Periscope app, which launched last Thursday. And, though the current battle has the big news organisations all a-flutter, the war is going to be one to win the hearts (and phones) of the fashion world. Periscope Archives - The Retail Planner.

Fashion industry chiefs, creatives and media socialites gathered earlier this month for the inaugural WGSN Creative Futures event, held in London over two-days to join the dots between creativity and commerce. Key themes included: phygital media, retail disruption, real-time social feeds and the important of experience by design. Here are my top six takeaways. What is Facebook Livestreaming? Facebook Live was launched in August of 2015 with a clever campaign that made the platform available only to celebrities. This of course gave the app a lot of attention as Meerkat and Twitter’s Periscope were gaining traction.

And by December of the same year, Facebook decided it was time to let more people in on the fun. However, there is a big but! The Facebook Livestreaming app is only available to a limited group of iPhone owners. Although Facebook still hasn’t announced the availability of a Live app for Android based devices, you can use the Facebook Mentions app to stream live video if you don’t happen to own an iPhone. So What is Facebook Livestreaming versus Facebook Live? 4 Clever Marketing Tactics Seen At Fashion Week. How Business Can Use Live Streaming. Periscope is an untapped ad revenue source for Twitter. Dive Brief: Marketers are finding value in live-streaming app Periscope, but Twitter isn’t turning that interest into revenue – at least not yet. Periscope a valuable media platform, but misses mark with Millennials.

Step aside Snapchat, there appears to be a new app taking over. If Twitter, Instagram and Facebook aren’t enough, Periscope is making its way onto smartphone home screens everywhere. 2015 Internet Trends Report. Forbes Welcome. Live-Streaming, Millennials and the Future. Burberry to sell its Spring 2015 nail polish on Twitter. Streaming Overtakes Live TV Among Consumer Viewing Preferences: Study. U.S. consumers are more inclined to stream entertainment from an Internet service than tune in to live TV, according to the results of a new survey from consulting firm Deloitte. How Brands Are Paving the Way for Periscope Marketing. As more brands join and use apps like Periscope and Meerkat, it’s becoming clear that live streaming will play a major role in digital and social marketing in the coming months and years. Topshop Archives - The Retail Planner. Fashion industry chiefs, creatives and media socialites gathered earlier this month for the inaugural WGSN Creative Futures event, held in London over two-days to join the dots between creativity and commerce.