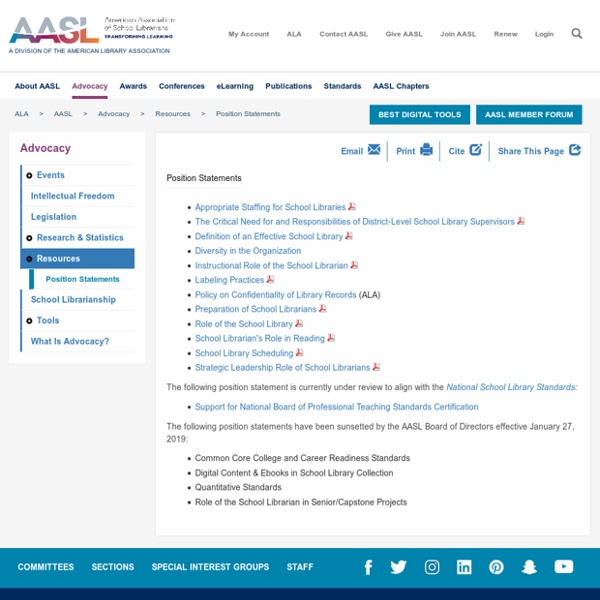 Skip to main content Position Statements The following position statement is currently under review to align with the National School Library Standards: Support for National Board of Professional Teaching Standards Certification

What Exactly Are the School Librarian Preparation Standards? You might have seen a press release from AASL back in November about the newly approved ALA/AASL/CAEP School Librarian Preparation Standards. And you might have thought, “What is this? Another new set of standards?” Sometimes all the different sets of standards can be confusing. These standards are different; they are used to guide school librarian preparation programs preparing future school librarians for Master’s degrees that include school library licensure. Reconsideration of Materials - Athens High School Library Requests for Reconsideration of Materials Censorship leaves students with an inadequate and distorted picture of the ideals, values, and problems of their culture. Despite a sound book selection policy for the selection of worthwhile books for students to read, occasional objections to a work will undoubtedly be made. Books are potentially open to criticism in one or more of these general areas: treatment of minorities, ideologies of love and sex, and use of language not acceptable to some people as well as other concerns.

Association for Library Service to Children (ALSC) Edited by Linda Braun, LEO: Librarians & Educators Online Children and the Internet: Policies that Work is successor to Children and the Internet: Guidelines for Developing Public Library Policy , published in 1998 by the American Library Trustee Association (ALTA), the Association for Library Service to Children (ALSC), and the Public Library Association (PLA). The original publication provided guidance and food for thought to librarians charged with drafting policy for children’s access to the Internet. With growing community concern over children’s safety on the Internet, continual debate about the Children's Internet Protection Act (CIPA) and Internet filtering software, and the constant advancement of technology, the time had come to update the publication with new information and resources.

Stuck on Standards? The AASL National School Library Standards were published a little over one year ago. Many school librarians have been implementing the standards in practice since, and many school librarians are just getting started in their implementation process. However, some librarians may be stuck on standards,, unsure where to start or what the standards look like in practice. The standards are designed to be a progression of competency rather than a skill set. Selection & Reconsideration Policy Toolkit for Public, School, & Academic Libraries "The library is a growing organism" S.R. Ranganathan (1931) Home | IntroductionWhy Do I Need a Policy? | Politics and Timing of Policy Creation | Selection Policies for Non-Public Institutions Basic Components of a Selection PolicyLibrary Mission | Support for Intellectual Freedom | Objectives | Responsibility for Selection | Selection Criteria | Acquisitions Procedures | Special Collections | Selecting Controversial Materials | Gifts and Donations | Collection Maintenance and Weeding | Policy Revision | Reconsideration Reconsideration ProcedureGuiding Principles | Statement of Policy | Informal Complaints | Request for Formal Reconsideration | Sample Reconsideration Form | Sample Letter to Complainant | Reconsideration Committees

Children's Internet Protection Act (CIPA) The Children's Internet Protection Act (CIPA) was enacted by Congress in 2000 to address concerns about children's access to obscene or harmful content over the Internet. CIPA imposes certain requirements on schools or libraries that receive discounts for Internet access or internal connections through the E-rate program – a program that makes certain communications services and products more affordable for eligible schools and libraries. In early 2001, the FCC issued rules implementing CIPA and provided updates to those rules in 2011. Information Skills Instruction Resources for School Librarians - Index Menu for This Page: National Standards | State and Province Standards | School District Standards | Information Literacy National Standards The 2017 AASL School Library Standards - The new standards have now been published, and they may be purchased at the ALA store. They are expensive.

1000 Black Girl Books Resource Guide – GrassROOTS Community Foundation This resource guide was created in direct response to the multiple requests made by educators, parents and students. Like Marley Dias, so many of you have asked for books with black girls as the main characters. And because of you, we have received thousands of books. The Freedom to Read Statement The freedom to read is essential to our democracy. It is continuously under attack. Private groups and public authorities in various parts of the country are working to remove or limit access to reading materials, to censor content in schools, to label "controversial" views, to distribute lists of "objectionable" books or authors, and to purge libraries.

*Something Familiar and Something New: Unpacking the Standards Drs. Elizabeth Burns and Marcia Mardis discuss the new standards. Did you get your copy of the new standards yet? The TL Toolkit for Student Success Home Think you don’t? Yes you do! Teacher-librarians can and do make a difference. There is a considerable body of documented evidence that proves that schools having a good school library and program have a positive impact on student achievement. Although the data is mounting globally it is also clear that school administrators need to have evidence at the local school level when planning for school improvement and making tough financial decisions.

Every Student Succeeds Act (ESSA) en Español Update: ESSA Consolidated State Plans A New Education Law The Every Student Succeeds Act (ESSA) was signed by President Obama on December 10, 2015, and represents good news for our nation’s schools. This bipartisan measure reauthorizes the 50-year-old Elementary and Secondary Education Act (ESEA), the nation’s national education law and longstanding commitment to equal opportunity for all students. The AASL Standards Web Portal: Accessing Standards and Support Resources (Webinar) Kathy Mansfield is the library media/textbooks consultant for the Kentucky Department of Education (KDE) and served as a member of the AASL Standards and Guidelines Editorial Board. Kathy was an elementary school librarian in Kentucky for 19 years before joining KDE. She is on the boards of both the Kentucky Association of School Librarians (KASL) and the Kentucky Library Association (KLA), as well as on the leadership team for the Kentucky Virtual Library (KYVL). Kathy was the 2015 recipient of the James A. Nelson Library Advocacy Award (KY Library Association), a two-time winner of the Award of Merit (KY Association of School Librarians – 2012, 2015), and the recipient of the 2002 Jefferson County Outstanding School Media Librarian Award.